Tips for growing your own holly in New Hampshire

Yes, the Iron Age — that’s when the ancient druids, a class of mystical Celtic priests, lived in parts of what is now Europe. They marked the year by the position of the sun so the winter solstice became a significant date. 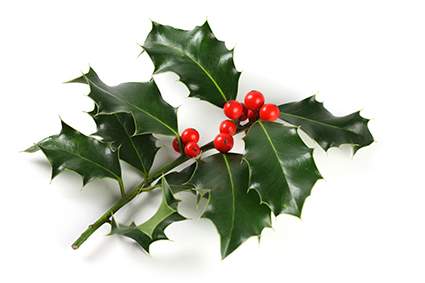 “Holly was important in that cycle,” says Margaret Hagen, a UNH Cooperative Extension field specialist. “It’s one of the ways the life force was seen in the winter, especially since it really stands out against the snow.”

The druids would bring it inside, hanging it over the door for protection from evil spirits and as a harbor for fairies. When the Romans arrived, they used it for Saturnalia, a celebration of Saturn, the god of agriculture. “They carried it in processions, gave it to each other in wreaths and decorated images of Saturn with it,” Hagen says.

Early Christians also saw significance in holly because its spiny leaves and red berries serve as a reminder of Christ’s crown of thorns.

All these years later, holly isn’t weighted with meaning for most people; it’s simply a bright addition to Christmas greenery. The “Deck the Hall” lyrics — the blazing yule, the gay apparel, the boughs of holly — reflect the contemporary role of the perfect-for-Christmas red and green plant.

FYI
For more information about holly and other festive flora, visit extension.unh.edu.

If you’d like to grow your own holly for cutting (it quickly grows back) or just enjoying it uncut, Hagen has some advice. She says, while there are as many as 400 varieties of holly, only a handful are winter-hardy enough for New Hampshire: “It’s really only the southern two-thirds of the state where it can thrive. It’s too cold from about Berlin north.”

The most popular varieties are the iconic ones with spiny, glossy leaves and big, red berries. For New Hampshire, the “blue hollies,” or meserveae, are best. They were hybridized in the 1950s to withstand the cold. Hagen says Blue Prince and Blue Princess (you need both male and female to get berries), and China Girl and China Boy are the meserveae cultivars most often chosen. She cautions buyers to read labels and buy plants that are in the same series so they bloom at the same time.

If you cut holly to decorate for the holidays, Hagen says don’t cut it too soon unless you plan to put it in water: “It’ll dry out in two weeks or less. If you cut it to use outdoors, the leaves can turn black in the cold. It’s a lovely way to decorate, but just keep these things in mind.”

Also beautiful for decorating — New Hampshire’s native holly, winterberry. It grows wild in swamps and bogs, and when it drops its leaves in the fall (it’s one of the deciduous hollies), it leaves its big, red berries on the branches.