This Chapel Is Accessible Only By Boat

It may be hard to get to, but the chapel on Bear Island welcomes all who seek it 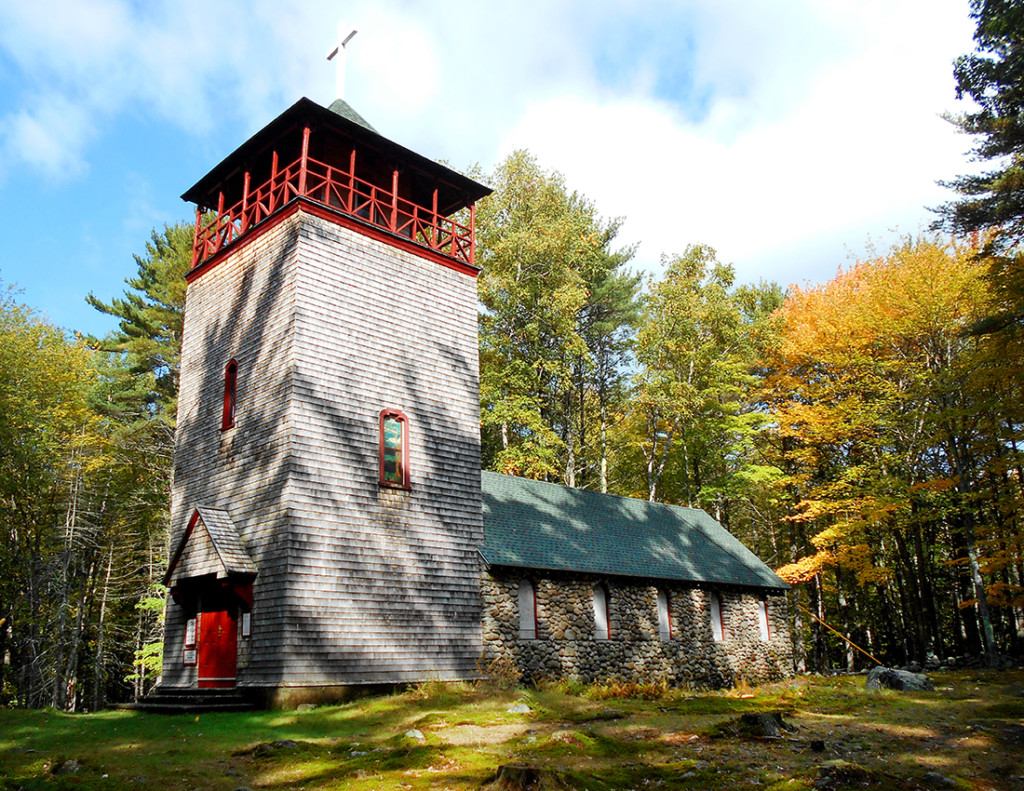 Bear Island is the second-biggest island in New Hampshire’s largest lake. The name comes from the reminiscences of James Hersey, who surveyed the island in 1772. Following the orders of provincial governor John Wentworth, Hersey was leading a party of eight men charged with mapping and naming the islands in Lake Winnipesaukee. The surveyors had the misfortune to disturb some hungry bears just awakening from their winter hibernations. There were more surveyors than bears, but more bears than rifles. The rifles were single-shot muzzleloaders, which were almost useless in close quarters after the lone shot was fired. The men had hunting knives, but the bears had teeth and claws and were in a bad mood after being disturbed. When the melee, ended, there were four dead bears, some injured surveyors, and Bear Island earned its name.

There’s a unique chapel on Bear Island, which isn’t exactly easy to visit. You’ll need to boat across the lake, tie up onshore, and then hike up to highest point of the island. The picturesque stone chapel is in a small clearing surrounded by forest on all sides. There are no roads, only hiking trails that radiate out in several directions, meaning worshipers are likely to be sporting casual shorts and sneakers rather than their Sunday finest. 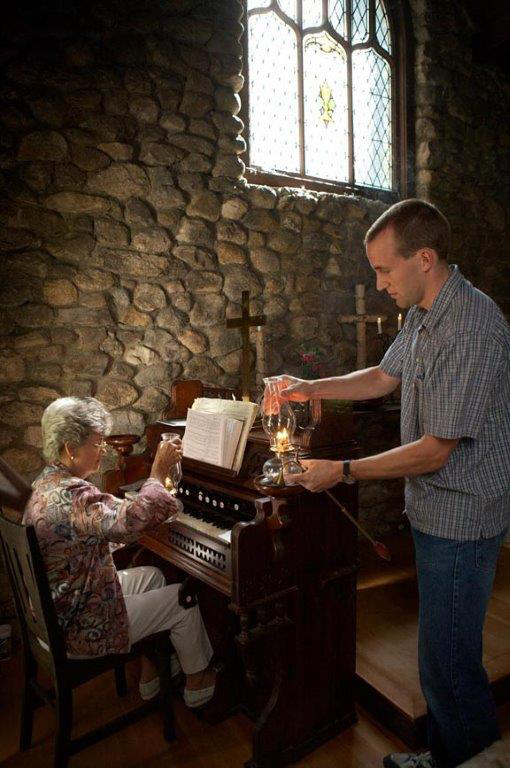 The organ was carried from the dock all the way up the steep trail. Photo by Shannon Doyle

The chapel does not have bathrooms, indoor plumbing or electricity — candles or sunlight streaming through the windows provide the only illumination. There’s room for about 70 congregants, who sit on folding wooden chairs, as there are no pews. Musical accompaniment is sometimes provided by an old foot pump organ that was carried by hardy volunteers all the way up the steep trail from the boat dock. In 1962 a 200-pound bell was donated to replace the original steeple bell, which had been stolen by vandals. The new bell came from a steam locomotive on the New Jersey General Railroad, and it remains a mystery to me how it got up into the tower. Another unique feature of this church is that well-behaved dogs are welcome to attend Sunday services.

St. John’s on-the-Lake Chapel provides interfaith services for the summer island community of Lake Winnipesaukee and for boating visitors from the mainland. It is the only island chapel on the lake, and it’s truly a unique place for seasonal guests to worship. Each week a new minister of a different denomination leads the services, making it a church where everyone is welcome, regardless of religious affiliation.

The idea of building a chapel on Bear Island was conceived by Bishop Edward Parker of the Protestant Episcopal Diocese of New Hampshire in 1915. In 1922, the Reverend Kenneth Ripley Forbes, an Episcopal minister, purchased a summer home on nearby Birch Island, and the two men joined forces to pursue the dream of building an island chapel on Lake Winnipesaukee. 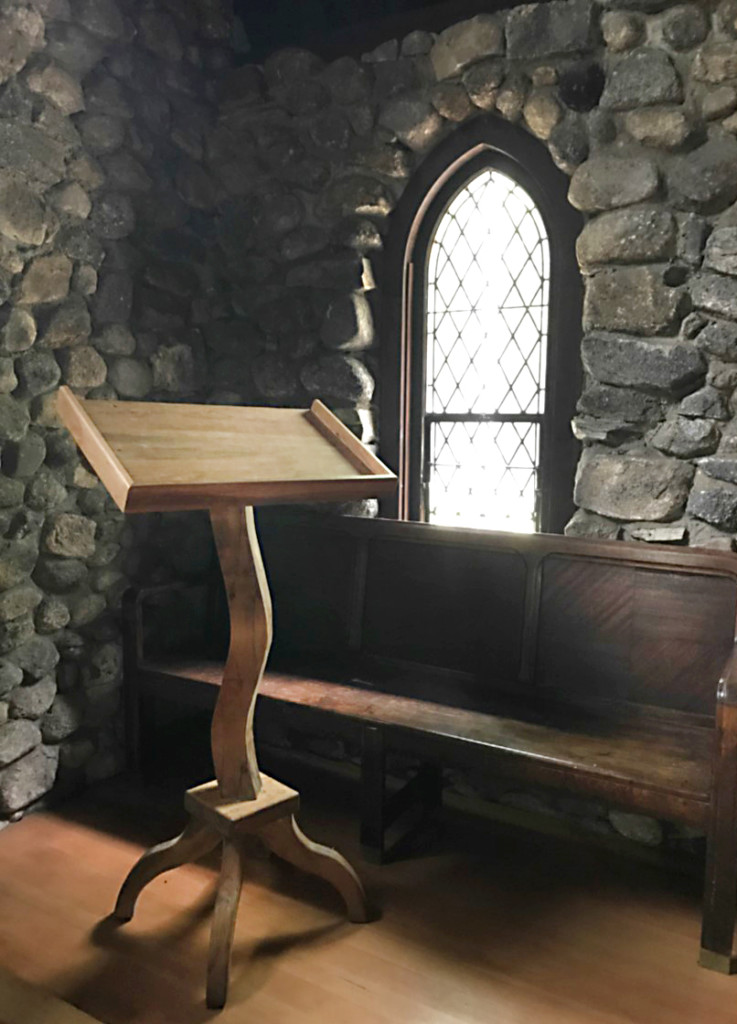 An existing observation tower located on the island’s highest point caught the clergymen’s attention. Built by Ellery Channing Mansfield in 1898, the tower site struck them as the perfect location for their chapel. Mansfield’s tower stood 60 feet tall and commanded a 360-degree view of the lake. In 1925, Parker obtained an option from Mansfield to buy the tower along with three acres of land for $1,400. Parker died before the transaction was completed, but his successor, Bishop John Dallas, made the purchase the following year.

Forbes was given responsibility for the design, funding and oversight of the construction of the new chapel. He developed a design for the proposed chapel that envisioned a fieldstone sanctuary embracing the existing observation tower, which would be converted into a steeple. Forbes began fundraising to build the chapel, and by the end of 1927 had raised the estimated construction amount.

With donations in hand, ground was broken and construction was completed in just three months. James Leighton, who built the original tower in 1898, was employed to construct the sanctuary and enclose the tower. Leighton used fieldstones gathered nearby for the walls of the sanctuary, and he hauled sand up from the shoreline for the mortar. When the project ran short of money, Leighton placed screens in the windows and later stained glass windows were donated one by one. The total cost of construction, including tower repairs, was approximately $6,000. 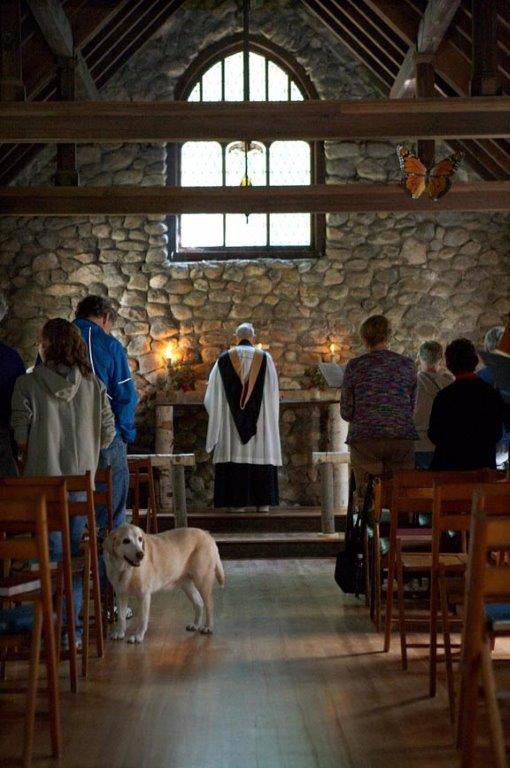 Worshipers of all faiths (and their furry companions) are welcome here. Photo by Shannon Doyle

Forbes, St. John’s “priest-in-charge,” wrote a letter for the dedication of the chapel that outlined the mission of St. John’s on-the-Lake: “This church has been placed where it is in order to minister to every sort of person who makes this beautiful region a vacation spot, either for long or short periods. Regardless of what your religious affiliation at home may be, we hope that you will join each Sunday with us at this community center of worship.”

In 1954, the St. John’s on-the-Lake Association was formed to provide funds to keep the chapel in operation. The association, working with the Diocese, took over the chapel’s financing and maintenance needs, as well as the responsibility of scheduling the various ministers. In 1976, the deed for the chapel was conveyed to the St. John’s on-the-Lake Association for $1, with the stipulation that it would revert back to the Diocese if it ever ceased to be used for religious purposes. The association solicited one cent from 100 different people, many of whom were children, to create a sense of community ownership of the chapel.

Though founded by Episcopalians, the chapel was envisioned from the beginning to be a place of worship for all, regardless of denomination. That tradition continues today as visiting pastors and guests arrive by boat and walk the footpaths to the chapel for Sunday service. St. John’s will regularly welcome around 50 people at a service, and will reach capacity a few times each summer.

The Bear Island chapel has endured for over 90 years and is a living memorial to those who envisioned and built it. It is also a special place for congregants and visitors willing to venture across the lake and through the woods to experience it. If you do decide to visit, try not to disturb any hibernating bears — they’re likely to be hungry and in a bad mood.

Thanks to all the members of the St. John’s on-the Lake Association who assisted with research for this article.