Ice harvesting was once a big business 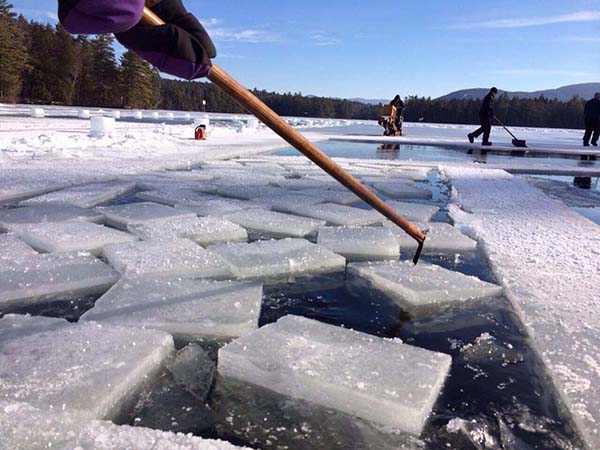 The Rockywold Deephaven Camps ice harvest on Squam Lake is the real deal. The resulting blocks are used all summer long in the camp’s guest cottages. Courtesy photo

I was in the archives at Canterbury Shaker Village reading some old journals when I spotted an entry that stopped me cold: “January 12, 1886: Get in the ice which is 15 inches thick and mercury 16 degrees below zero. Two of the hired men froze their ears.” The journal entry for the previous day indicated that the Brethren had plowed the snow off the ice when the mercury was much warmer, only 12 below zero. Hardy New Englanders have been harvesting ice since the late 1700s, but men must have been tougher then; when the temperature is 16 below, I just want to hug my woodstove — not go out and freeze my ears off.

Archive records reveal that after Christmas, the Shakers started documenting the temperature drop and the ice thickness, measuring it daily and waiting for the conditions to be right for their annual ice harvest. Harvesting required waiting until approximately a foot of ice had formed on the water surface. If they harvested too soon, the ice would be thin. Anything less than 8 inches would melt too quickly during transportation to far-flung locations. For the ice to last throughout the heat of the summer, it had to be at least 10 inches thick. To be able to hold a horse without breaking, 10 inches or more was desired. But waiting too late into the season meant that there might not be enough winter left for refreezing and a second crop.

It wasn’t only the Shakers who harvested ice. This was a routine winter chore for many New Hampshire farmers, and a profession for ice vendors. For both farmers and Shakers, a surplus of quality ice meant an alternate source of cash when special ice trains headed south out of New Hampshire in the heat of summer, carrying ice to the big cities. Ice was kept stowed away in insulated icehouses until it was sold or used for preserving food on the farm itself. As the first crop of the calendar year, a good ice harvest could set the tone for the upcoming year, ensuring there was sufficient ice to preserve the raised meats, dairy products, fruits and vegetables throughout the summer, and also for special summertime treats like hand-cranked ice cream. 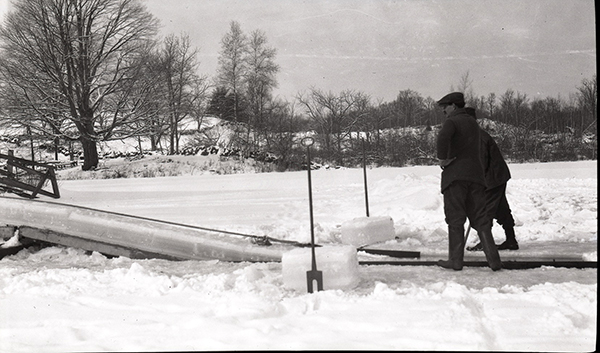 The heavy ice blocks were difficult to move multiple times, so icehouses were built right on the shore. Blocks were pushed from the water onto a ramp and then into the house. Courtesy photo

Ice harvesting was labor-intensive, requiring several capable men and usually a horse or two in the days before gas-powered equipment. Plowing the snow off the ice was the first step in a carefully timed ritual that required anticipating weather before there were professional forecasters. Clearing the snow away too early meant that it would have to be done again if another snowstorm hit, but waiting too long meant that the quality of the ice would suffer. Because snow on top of the ice slows freezing, it was cleared from the surface before the ice could be cut. Horses plowed the snow off of the pond a day or two before the ice was harvested to thicken the ice and clean away the top layer of granular snow ice, which was less desirable. Snow ice melted more quickly and wouldn’t last into the heat of summer. Natural deep-pond ice has fewer air bubbles and melted more slowly.

After the snow was removed, the surface would be marked out for the desired size ice “cakes.”  Men measured grids on the ice, marking lines parallel and perpendicular across the pond. Roughly 22 by 36 inches was the desired cake size, but bigger or smaller blocks were also cut depending on the ice thickness, pond size and local storage facility requirements. Special horse-pulled ice plows scored grooves into the surface of the ice in the checkerboard pattern that had been laid out. Horses wore special caulked horseshoes to give them extra traction on slippery ice and men sometimes wore spiked boots.

The next step in the process was to saw through some of the scored grooves with a handsaw to free large ice floats, which formed an open channel down the middle of the pond. Teams of men using ice saws followed the grooves, sawing the floats into free-floating icebergs. The ice saw looks similar to a two-man crosscut saw, so the joke played on the new guy was that they would flip a penny to see which man would have the end on top of the ice, and which man would be on the opposite end of the saw — below the ice.

Ice Day
January 20 from 9 a.m. until the ice is in
Rain date February 3
Held on Kezar Lake, you can watch the ice harvest and then warm up in the historic Ryder Corner Schoolhouse with hot drinks and soup.
Muster Field Farm Museum
Harvey Rd., North Sutton
(603) 927-4276
musterfieldfarm.com

Rockywold Deephaven Camps Annual Ice Harvest
As ice from this weeklong harvest will be used during the summer for the camp’s guest cottages (each comes with a traditional icebox), the harvest occurs when the ice is at the right thickness, usually sometime from mid-January to mid-February. Keep an eye on their Facebook page for updates or give them a call. The location can change as well — either at RDC or Squaw Cove (both are on Squam Lake). Both also have parking, though it’s much more limited at the Squaw Cove location.
18 Bacon Rd., Holderness
(603) 968-3313
rdcsquam.com, facebook.com/rdcsquam

When the large floats were cut free, heavy iron breaking-off bars or forks were used to jab and pry the scored but unsawn blocks apart, and to break down the floats into individual ice cakes. When done by an experienced person, breaking the blocks off of the larger floats looked as easy as snapping a square off of a segmented candy bar.

Using long-handled hooked poles, the individual squares were then floated into the open channel where they bobbed in place, waiting to be pushed and pulled down the channel and up a chute, landing in either an icehouse or onto a wagon to be hauled away. The work was dangerous, not only because of frostbite and hypothermia, but wet and slippery ice meant falls near open water. Ice cakes weighing as much as 300 pounds sometimes got away, careening backward down the chute, breaking ankles or sending men sprawling. Handling cold iron tools in sub-zero temperatures meant that even with the best of gloves numb fingers were the norm.

Harvested ice was then stored in an icehouse that was ideally built into a shady valley or side hill beneath thick softwood trees. It had to be close enough to the pond so that the ice could be slid directly into it, thereby avoiding the need to be loaded onto a wagon, trucked, unloaded and handled a few extra times. Icehouses were customarily built with a layer of sawdust between double exterior walls to act as insulation for keeping the cold inside and the summer heat outside. The more tightly the ice was packed, the longer it lasted. When the icehouse was full, the blocks were covered with a foot-thick layer of sawdust to further insulate against the summer heat. A poorly constructed icehouse could mean a complete loss of your winter crop, and your labor would amount to nothing, as one journal entry indicates: “August 29, 1877: Harvest of ice exhausted on account of defect in icehouse.”

As the ice harvesting business grew, it became more common for the average homeowner to have iceboxes in the home. By the end of the 1800s, many Americans stored their perishable food in an insulated icebox usually made of wood and lined with tin or zinc. A block of ice was placed inside to keep the icebox cooled. In the 1930s, many Americans began giving up their iceboxes filled with melting ice for newly affordable electric refrigerators, which allowed for more space and more longevity for leftover foods. Refrigerator sales grew as rural electricity expanded and homeowners made the switch to electric. As refrigeration grew, the ice industry melted away.

There are still a few places in New Hampshire where the mostly forgotten ice harvest can be experienced as an old-time tradition, demonstration or as an excuse for a winter party. If you ever have an opportunity to participate getting the ice in, take it. It is a unique experience and good excuse to get outside in the middle of winter, but wear a warm hat — you don’t want to freeze your ears off.