OK, he might not be famous outside New Hampshire, but the drummer, pastor and Mercy Street founder deserves recognition. 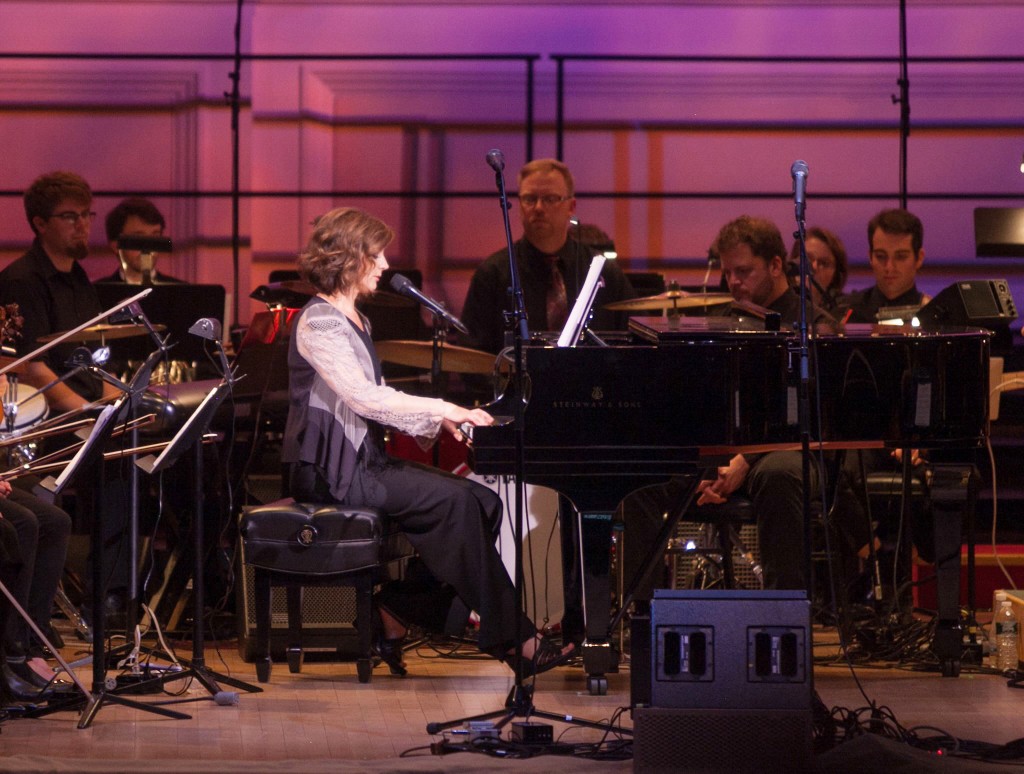 It’s Saturday night and Aaron Goodro is sitting behind the drums onstage at Carnegie Hall just a few feet away from Grammy Award-winning singer-songwriter Sarah McLachlan. No time to entertain rock-star dreams though — before the end of the night he’ll be on the road back to Plaistow so he can lead Sunday morning church service. Then he’ll be preparing for a weekly gathering where he’ll counsel families who have lost loved ones to addiction

But first, he’s got to count off the band because, well, there’s a sold-out Carnegie Hall full of people waiting to hear Sarah McLachlan.

Such is life for the multiskilled and quick-witted Goodro — an in-demand drummer, the pastor of the First Baptist Church in Plaistow, and founder of Mercy Street, a six-year-old organization that helps families affected by addiction and to provide hope for those in recovery.

“Usually when we’re playing in New York we get out late and head back home,” he says of the journey — both literal and figurative — from Carnegie Hall to Main Street in Plaistow. “Then, within the next day or so, I’ll be taking out the trash and doing the things I neglected while I was away.”

It often finds the 47-year-old father of two in very different worlds, depending on the role he’s filling that day. There’s his calling, of course, but then there are the rock shows, theater productions and recording sessions that take him from the pulpit and put him on stage.

“People will do a double take,” he says, laughing. “They’ll ask, ‘So, what’s your day gig?’ I’m a pastor — yet there I am playing ‘American Idiot’ musical theater in full eyeliner on stage.”

He was part of New Hampshire composer Tim Janis’ ensemble playing Celtic music on the “Today” show in March, and since 2013, he’s been traveling to the Big Apple a few times a year for shows organized and produced by Janis. It’s put him on the Carnegie Hall stage with artists like McLachlan, Loreena McKennitt, Zachary Levi, Andrea Corr, Matthew Morrison, Colbie Caillat and Melora Hardin, among others. 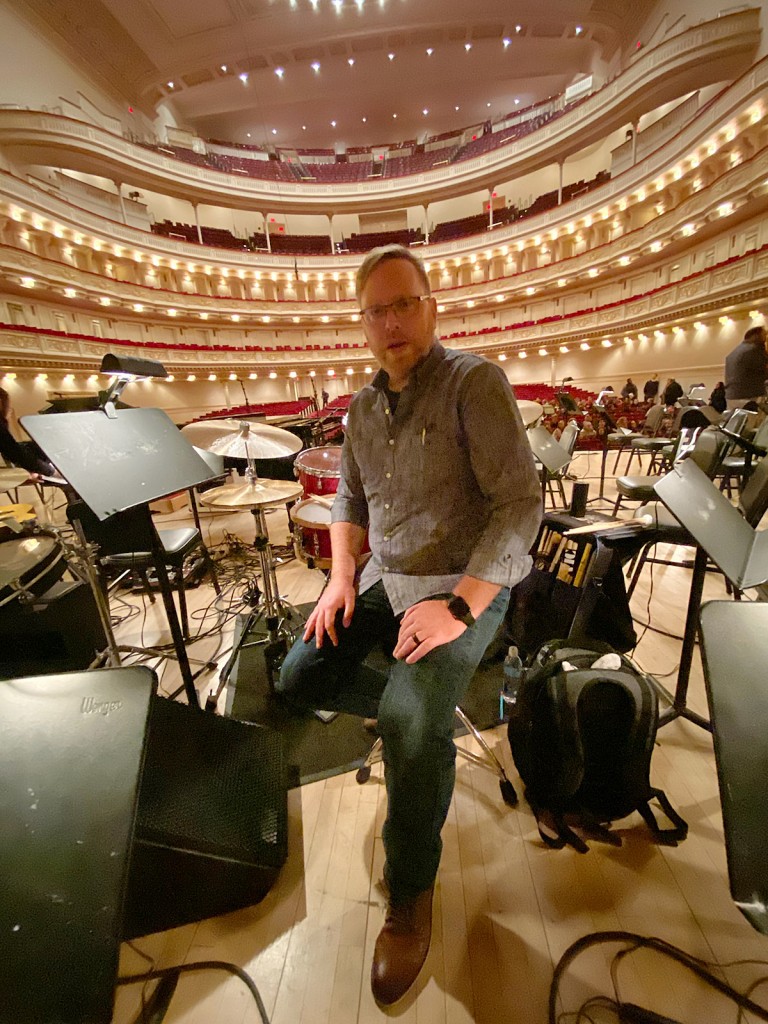 “It really is kind of a thrill to be there,” Goodro says of performing at the revered New York City auditorium. “The venue is impressive, but working with people I’ve played music with for 20 years is also a thrill. The breadth of the musicians on stage is great and really challenging.”

Though Carnegie Hall typically hosts more classical music performances, Goodro says, “Backstage there are some really amazing pictures of people who have played there, like Ella (Fitzgerald) and the Beatles. One night Bono was there the night before we played.”

For one performance, he played in a show created by Sibylle Szaggars — the wife of actor Robert Redford.

“Right before we started, I look up and in the money seats off to my right, the first tier, is Will Calhoun, the drummer for Living Colour,” Goodro says. “He had worked with Sibylle before and on variations of that piece. That was a fun, nerve-racking moment.”

It wouldn’t be the last memorable moment that night, which is now memorialized among friends as the night Goodro fell asleep onstage at Carnegie Hall.

“It was exhausting because I had a click track in my left earpiece that was synced with the very precise timing of the video,” he says. “In front of me was a video monitor so I can see what’s going on, with the measure and the beat number and the image being projected. So, I’m reading charts and watching the video and listening to the click and watching the conductor. I was on a large stage with a lot of strings, so I’m the ruler by which they’re measuring. It was really exhausting to keep pace for that long of a duration.”

“It was very peaceful and I was very comfortable in my drum seat. I closed my eyes for a few moments and just nodded out. In my own home, I’m known for being able to sleep very quickly, but it’s not like I was snoring and drooling.”

It’s that unflappable nature that allows him to face audiences in a world-famous venue with the same calm demeanor he has stepping in front of his congregation each week.

He’s now eight years into that standing Sunday morning gig as the pastor of the Plaistow First Baptist Church — his latest spiritual (and actual) home in 24 years spent throughout southern New Hampshire churches. It’s also a role that also sees him getting behind the drums as part of the service’s musical performances each week. And lately, that stage has been slightly higher than normal.

When the pandemic altered life everywhere last spring, Goodro did some quick planning and decided to elevate the Sunday service. Literally. He and his fellow musicians took their equipment, a PA system and some microphones out onto the roof of the church — for 58 weeks in a row, regardless of conditions. Whether through sheer luck or divine intervention, there’s only been one rainy Sunday during that time.

“It’s a great outlet,” he says. “When we play indoors, I can’t really hit. I have to play with dynamics. Outside, I can go full ham. I kind of unleash. The full church hadn’t seen that side of my personality or musicality. It’s fun to do that.”

Parishioners park in the lot below, filling the space between the hall and the town’s elementary school, signaling approval through quick bursts of a car horn. Song and message selection is carefully managed. Goodro’s plan all along has been to offer a 30-minute experience.

Then there’s his Tuesday night mission: Mercy Street. Formed to help families through addiction and loss, it all started six years ago when he began noticing an unfortunate trend.

“I began to recognize I had done a handful of funerals for people who had overdosed on heroin or opioids,” he says. “I was starting to realize this when I saw that a young woman from a former church I was at, and I had a little interaction with, had passed of an overdose.

Goodro took an unusual step and called the funeral home. “I said to them, ‘You know me, I’m not a hearse chaser. But if they don’t have a church affiliation, I’d like to help.’ I was connected with the family, and I cold-called Doug Griffin. The first thing he said to me was, ‘Pastor Aaron, is my Courtney in heaven?’ It got a lot more real to me then.”

Goodro admits that before he got involved in the recovery community, he “naively thought, why would anyone do heroin? I was being a dismissive jerk and judgmental,” he says.

“Once I looked at that question, it struck me that there are always reasons people do drugs, and that’s what made me develop more compassion for the project.”

Working with Griffin, Goodro began to build the organization. At first, it was a vigil to give parents a place to grieve their adult children. That evolved into a meeting on the third Sunday of the month. Now, Mercy Street meets every Tuesday at 7 p.m. Sometimes there are as few as 10 to 15 people in attendance; other times as many as 40. Over the years, as the opioid crisis, in particular, raged, it grew into a place for people to talk about addiction, recovery and loss.

“We’d gather in the sanctuary, there would be some music, someone would speak, and then, organically, people started bringing food,” he says. “We’d be in the sanctuary for an hour, and then we’d spend two hours after that talking and eating and finding a connection in this.” 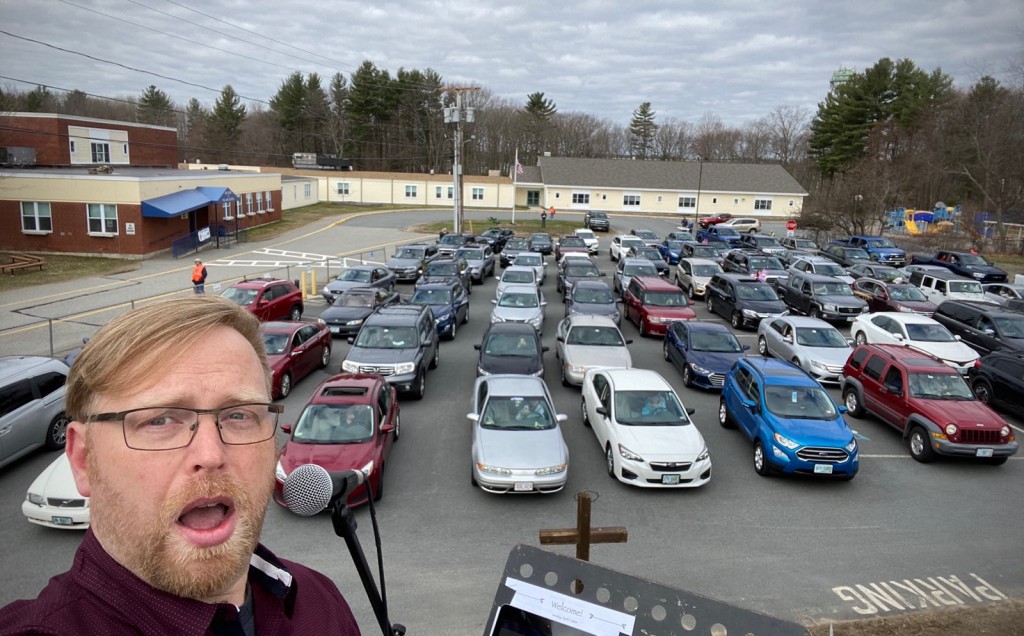 Aaron Goodro standing in front of his congregation and the view from behind the kit on the roof of the First Baptist Church. Courtesy photo

It grew to the point where the group needed a name. Mercy Street, chosen by its music-loving founder, was inspired by a Peter Gabriel song, which was in turn inspired by the work of poet Anne Sexton, who struggled with mental illness before taking her own life in Boston in 1974.

“The song is based off of one of her poems,” Goodro says. “She was looking for a place called Mercy Street. A place of respite. Sadly, I don’t know if she found it or not.”

Providing that safe harbor is a key element for the group. Goodro has adopted writer Johann Hari’s philosophy: The opposite of addiction isn’t sobriety, it’s connection.

According to Goodro, that compassion is needed now more than ever. As New Hampshire emerges from the pandemic, counselors are finding that the drug crisis is worse than it was before COVID-19. By the end of last summer, a segment of people in recovery started going back out again, seeking relief from the quarantine and distancing that had become necessary.

“It’s the isolation,” he says. “Isolation in anything is challenging, but for a person who struggles with addiction, they need that community to help out. They get fed up, the stress is too much. For people trying to seek normalcy in a pandemic, I can see where that quick escape might offer an allure.”

Then the meeting ends for another week, and Goodro checks his schedule. There will be another show, then another service — maybe a wedding, a funeral — and a call to pack up his drums for another opportunity.

“There is some weight to this stuff, but music and drumming helps me recreate and connect with people in very different situations and from very different lifestyles that
I don’t always have access to,” he says.

Goodro was recently talking with Todd Sucherman, drummer for the band Styx, who gave him some advice — ostensibly for when he was stepping behind the kit, but something he’s adopted as a way of approaching each of his roles.