The Road Wrinkles That Winter Leaves Behind 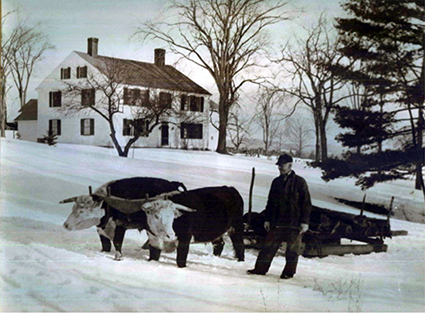 Squire with his beloved teams of oxen. Courtesy Photo

April Fools’ Day, opening day of fishing season, Easter and IRS income tax deadline day are all memorable dates that occur every April. But, for most New Hampshire residents, April is also the month known for unpassable roads. It varies a little bit each year with the weather and coming of spring, but typically April is when frost heaves, potholes, bumps, sinkholes, deep muddy ruts, divots and other assorted road wrinkles appear at their worst.

Town road agents and highway crews do their best to keep up with deteriorating conditions, but sometimes they just can’t handle it all and local citizens have to take matters into their own hands. That reminds me of a true story that was told to me by Elmer Jackson, the old farmer who owned my farm before me.

It seems that many years ago, Elmer’s grandfather, Old Frank Jackson esquire, owned the farm and was known locally as Squire Jackson. He had a herd of Guernsey cows and ran a profitable dairy farm and did some logging too. He also cut and sold ice off of Horseshoe Pond before rural electricity arrived, but his real talent and love was for ox teams.

Squire Jackson raised, trained and sold oxen, and produced some of the finest teams in the state. He worked them daily in the woods, snaking out heavy logs and using them around the farm to pull plows, wagons loaded with hay or ice, and other farm implements in the days before tractors and trucks.

Squire Jackson’s teams built up unbelievable muscle strength from their daily work routine, and the bond he developed working with them meant that he did very little prodding or whipping to get them to move. Usually a quiet “gidup there” was all that was needed. It was said that the Squire and his team never came home from the county fairs with less than a blue ribbon in the oxen-pulling contests.

One spring when the roads were particularly frost-heaved and filled with potholes, the local road agent didn’t seem to be doing much about it. Rumors circulated that the road agent was spending too much time on the opposite end of town where a lonely young widow lived, and it didn’t appear that he’d be getting to Jackson’s side of town to repair the roads anytime soon. Old Squire Jackson decided to take matters into his own hands.

At the time, he had a team of Polled Hereford oxen named Ike and Mike( ’cause they looked alike) and he hitched them up to a drag scoot and walked them up the hill to the center of town. At the point where Horseshoe Pond Road meets the sideline of Flaghole Road, he pounded a line of 3-foot-long, number 6 rebar pins deep into the ground all the way across the intersection. With the road sufficiently pinned, he walked the oxen back down the hill to the sharp corner in front of his farm at the intersection with Sanborn Road (correctly pronounced “SAN-bunn Road”).

At the sharp corner, Squire Jackson took the drag hook from the scoot and pounded it down deep into the road with a double-jack hammer. He quietly suggested, “Gidup there” to Ike and Mike, and they leaned into their yoke, strained for a moment, and then plodded down Sanborn Road. There was some creaking and cracking, followed by a popping noise and a sudden sharp SNAP! Then the entire ribbon of road all the way back up to the anchor pins at the Flaghole Road intersection lifted off the ground momentarily, fluffed itself out perfectly straight in the air, and settled back onto the road bed without a single wrinkle anywhere in sight.

Every frost heave, pothole, bump and grind was gone when Squire Jackson unhitched his team and sent them back to the barn. Being a somewhat cantankerous individual, the Squire then went into his office and made out a bill for the work done and sent it to the road agent, c/o the lonely widow on the opposite side of town, demanding payment in full upon receipt for his labors.

Now, if any of you reading this have any doubts whatsoever about the truth and accuracy of this story, then I suggest you go back to the beginning and re-read the first two words.