The road to Success is not easy, but for fishing fans it’s not about the journey 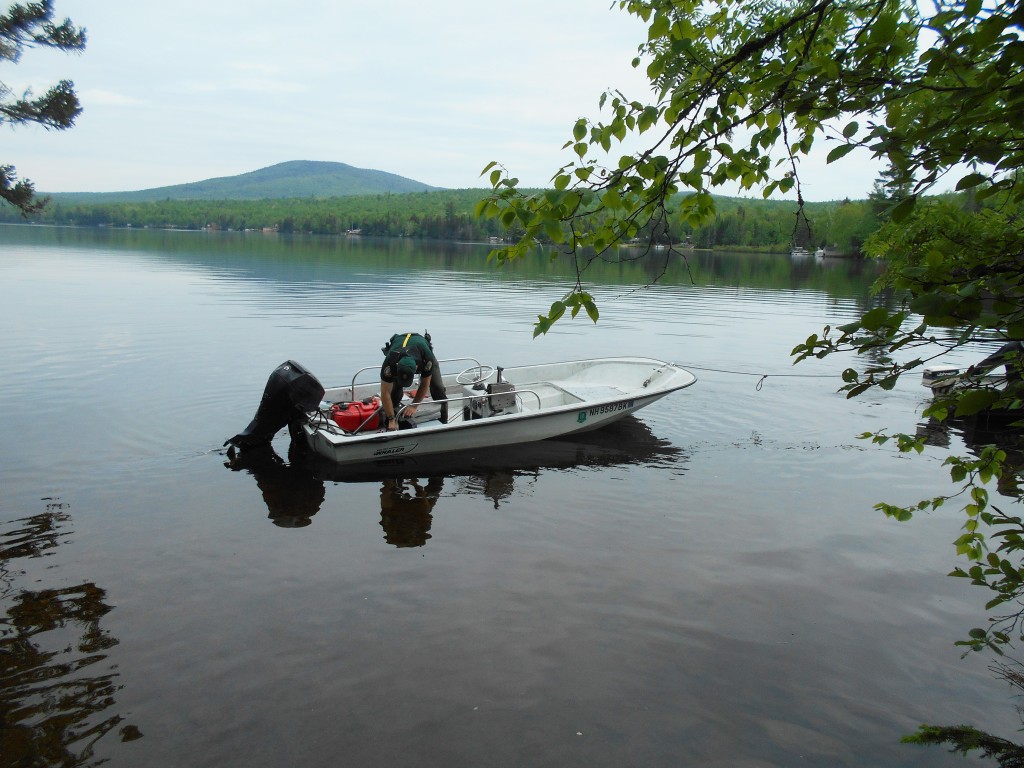 Conservation Officer Mark Ober prepares a boat prior to releasing fish into Success Pond. A dead battery is just another challenge to overcome.

There is only one way to reach Success, and it is a rough ride that will test your resolve and shake you to your core. I know, I’m on the road to Success. The unincorporated township of Success is located in Coös County, easterly of Berlin and snuggled up against the Maine border. It is a popular destination for outdoor enthusiasts, and there are some seasonal cabins, mostly located on Success Pond, which means there is an active seasonal population, but the 2020 census indicates that the township has a permanent population of four. That’s four people in 57 square miles. There is no town government, so oversight and governmental services are provided by the county and state. Success landowners pay their property taxes to the County of Coös, but with so few residents, the maintenance of the only road doesn’t seem to be a priority.

I’ve joined a convoy of trucks hauling live fish into Success Pond from the State Fish Hatchery in Berlin. Leading the parade is a New Hampshire Fish and Game biologist driving a pickup truck towing a boat and trailer. Two hatchery tank trucks loaded with fish to be stocked follow him. A conservation officer also towing a trailered boat is next, and I’m bringing up the rear with a truckload of “just-in-case stuff.” There are no convenience or hardware stores selling needed items on the road to Success, so it’s best to go prepared for anything.

After six slow miles of pothole dodging on the washboard road and repeatedly bouncing my head off the roof of the cab, a posted sign warns me that … the road will now get worse … for the next six miles. Some joker has posted a “10 mph” speed limit sign, but we are barely doing 3 mph and anyone going faster than that must not like their truck (or their kidneys) very much. There are no service stations, rest stops, telephones or houses anywhere on the road to Success, so it’s wise to be kind to your truck. If you break down, you walk.

Today’s adventure began with an early-morning arrival at the Berlin Fish Hatchery. It is a beehive of activity as trucks are being prepared and fish are being netted, checked, weighed and counted. Fish swimming freely in a pool don’t hold still for accurate counting, so we scoop up a few netfuls and weigh them, counting the number of fish in each net to determine the average weight and number of fish per pound. Trucks are then loaded based on pounds of fish and a mathematical conversion determines the approximate fish count. I join a bucket brigade passing netful after netful of fish from the pools up into the oxygenated water tanks on the trucks. 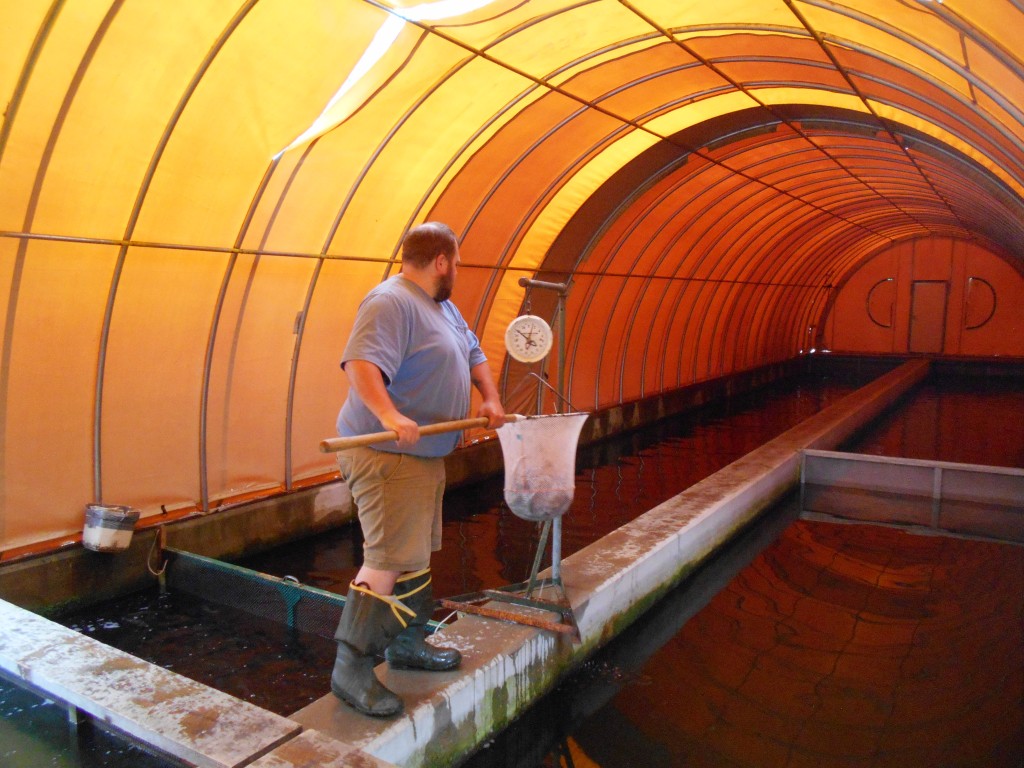 Fish culturist Josh Curtis nets and weighs fish inside one of the covered fish raceways.

From one of the raceways, we load 1,000 4-to-6-inch-long eastern brook trout. Brookies are easily recognized by their square tails and white lines on the front of their lower fins. Brookies are an important game fish and a symbolic figure in the heritage of New Hampshire. This native brook trout is also the official state freshwater fish.

From another set of pools, we load 3,000 6-to-8-inch-long rainbow trout. The rainbows have a pink or red lateral band running from their cheek to their tail, and they glimmer and sparkle when they leap from the water. Rainbows are not native to New Hampshire; they were introduced here from California in 1878. Because rainbows tolerate warmer water temperatures, they do well in waters that are too warm for the brookies.

We reposition the trucks, and from another set of raceways load 500 8-to-10-inch-long brown trout. Brown trout have a dark, olive-brown coloration with black spots on their body, fins and tail. Brown trout favor the slower, deeper areas of lakes and ponds and thrive in cool water. They tend to grow bigger faster than the brookies and rainbows when their preferred diet of invertebrates and smaller fish is abundant.

All of these fish are about a year and half old, and all are destined for Success. The desired species and specified numbers of fish to be stocked today was predetermined by the Fish and Game biologists but are raised and stocked by the hatchery personnel, with assistance from the local conservation officer who knows the best places for the tank trucks to gain access to the water. 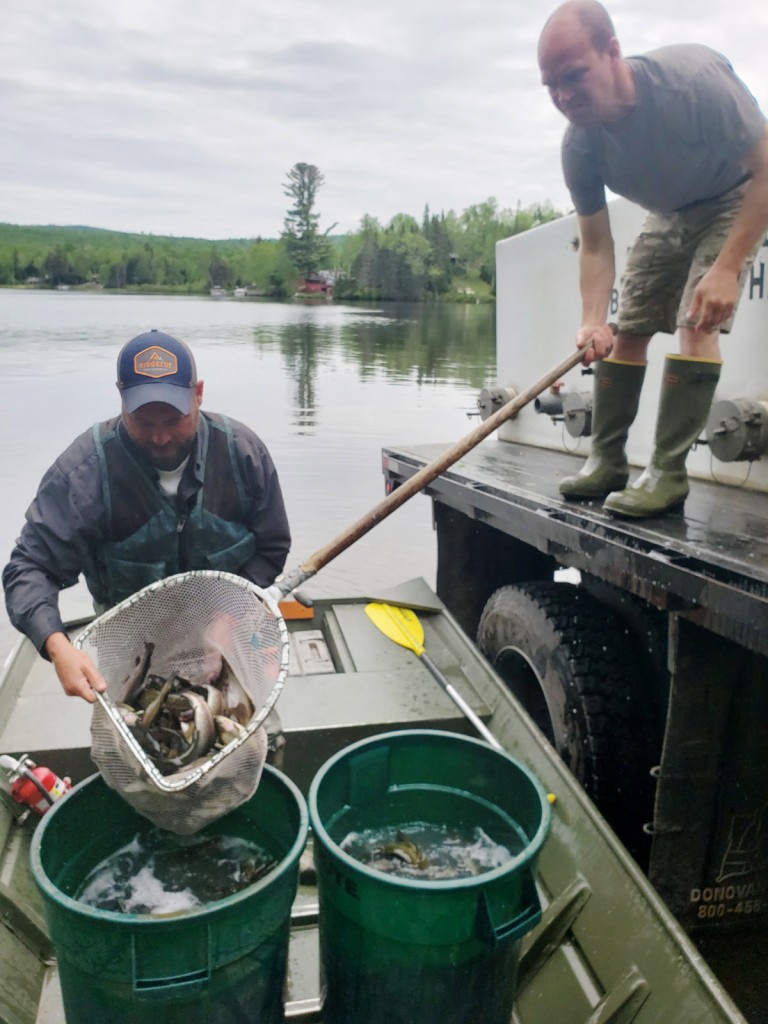 This hatchery is almost 100 years old, but it is not the oldest state hatchery. In 1877, New Hampshire’s first hatchery was established at Livermore Falls. Between 1883 and 1893, the number of state hatcheries expanded to 11. Today, there are six hatcheries spread out around the state, and collectively they produce nearly a million catchable-size trout each year, which are distributed to roughly 375 lakes and ponds and 1,473 miles of streams. Without the fish raised in these hatcheries, it is estimated the trout and salmon populations would be depleted in three to five years.

Construction of this Berlin hatchery began in the 1920s and was continued throughout the 1930s by the Civilian Conservation Corps. The hatchery was then operated by the U.S. Fish and Wildlife service until 1982, when operations were turned over to the State of New Hampshire. Because the facility is located on federally owned land within the White Mountain National Forest, the hatchery functions under a special use permit that allows for operation of a state facility on federal land. An average of 200,000 fish are raised at this hatchery every year.

Back at the launch site, battery jumper cables are needed from my just-in-case truckload of stuff when one of the boat motors acts ornery and won’t start. Plastic barrels are loaded into the boats, filled with water, and the bucket brigade begins again in reverse, this time passing netfuls of fish from the tank trucks down into the barrels in the boats. The boats tag-team, alternating loading at the launch, and zipping about the lake releasing fish from the barrels. By the end of the day, all 4,500 fish are in the pond enjoying their new freedom and first taste of Success. With the successful stocking mission behind us and a rough road ahead of us, we form up and convoy back to Berlin, testing our mettle on the road to Success once again.