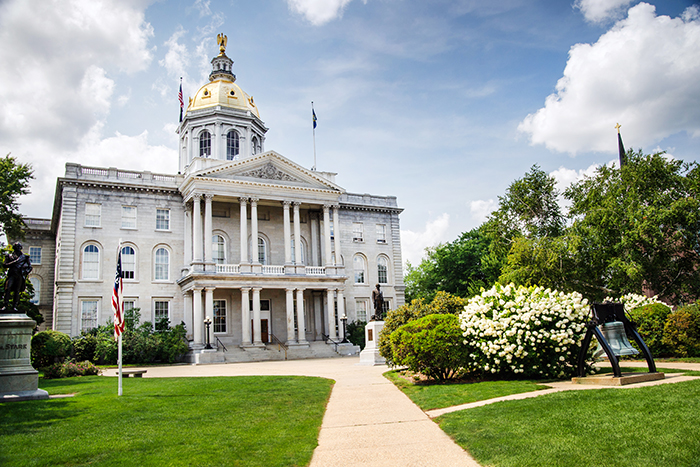 After nearly 20 years of wandering the halls, Virginia Drew, director of the Statehouse Visitor Center, has learned a few things about the building. She knows which portraits hang where, which huge window to look through for the best view of the golden dome, and where to find fossils in the floor.

“There’s something for everyone in here,” Drew says, noting some 30,000 visitors — from New Hampshire fourth-graders to curious tourists to international guests — tour the building each year. “I believe history has to be something tangible. The Statehouse is really a treasure for the people of New Hampshire.”

As the Statehouse — the oldest state capitol in which both houses of the legislature meet in their original chambers — marks 200 years, Drew shares some of her favorite treasures found within its walls. 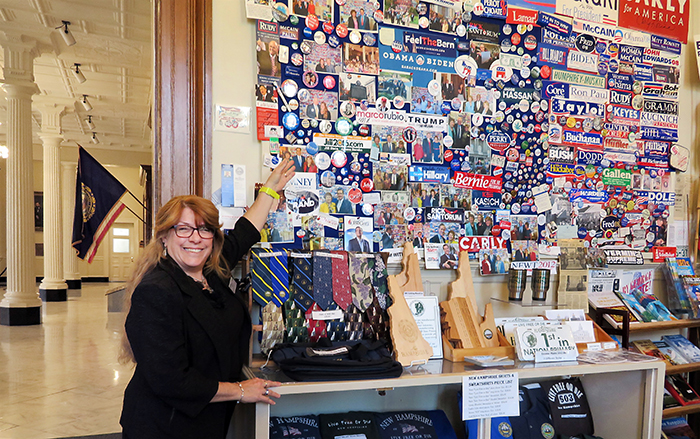 First-in-the-Nation Primary Display
Near the entrance to the visitor center, the First-in-the-Nation Presidential Primary display is a colorful jumble of campaign buttons, slogans, and candidate photographs and signatures from a 1968 Humphrey-Muskie sticker to a giant cardboard cutout of Donald Trump.

Old Man of the Mountain Painting
Hanging beyond the primary display is an impressive painting of the Old Man of the Mountain. The painting was part of the 1876 Centennial Exposition in Philadelphia and was given to the state by Lucinda Taft, whose husband owned the grand Profile House and surrounding property — including the Old Man — in Franconia Notch from the hotel’s 1853 opening until his death in 1881.

1796 Map
On the wall opposite the Old Man painting hangs an original hand-colored map of New Hampshire from 1796, only 20 years after the state became the first to adopt its own constitution. Granite Staters can look to see if their town existed 223 years ago, when there were only five counties (today there are 10), but the spelling may be a bit off; the map was made by German cartographer Daniel Friedrich Sotzmann.

Bicentennial Dioramas
Four dioramas in the visitor center showcase important New Hampshire moments in the American Revolution: the surrender of Fort William and Mary on December 14, 1774; the repulsion of the first British attack at Bunker Hill by Col. John Stark and his New Hampshire troops on June 17, 1775; New Hampshire’s adoption of the first state constitution on January 5, 1776; and the climax of the Battle of Bennington, a turning point in the Revolution, when John Stark’s charges were victorious. 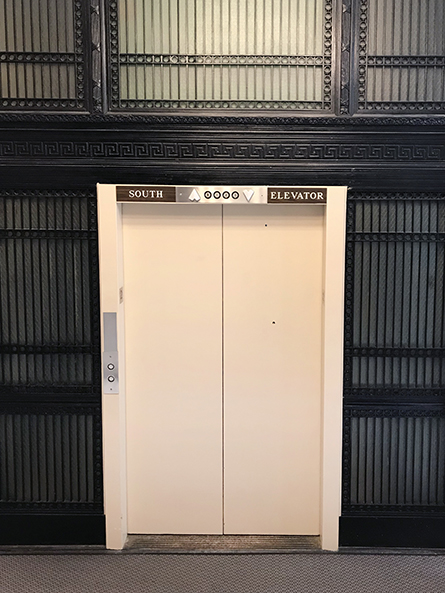 The elevator, originally installed in 1910, was once staffed with operators.

The Elevator
Installed during the 1910 renovation of the Statehouse, the black-iron-framed elevators were once staffed by operators. House Speaker Steve Shurtleff remembers getting kicked out of the Statehouse as an 11-year-old, after wandering into the building and riding the elevator up and down, and up and down. Now, he says, “I always take the elevator. Sometimes I get off on floors I don’t need, just because I can.”

Richard Gill Forrester Flag
The Hall of Flags at the main entrance to the Statehouse contains 88 Civil War battle flags, as well as flags from the Spanish-American, Vietnam and both world wars. However, there’s one flag with a story that stands out. When the South seceded from the Union in April 1861, the American flag was lowered at the capitol in Richmond, Virginia, and discarded unceremoniously. Richard Gill Forrester, an African-American page in the capitol, secretly retrieved the flag and hid it for four years, presenting it to the 13th New Hampshire Regiment as it entered the city after Richmond’s fall in 1865. Drew says Virginia asked for its flag back in 2011, but New Hampshire refused.

Civil War Mural
Just around the corner hangs a giant mural depicting Pickett’s Charge on the third day of the Battle of Gettysburg, in which the 12th New Hampshire Volunteer Infantry Regiment was engaged. Tour guides often bring fourth-grade classes to view the mural to demonstrate what the soldiers and their flags endured.

Get There
Visit the visitor center’s website to book a tour online, shop the store or take the NH trivia quiz. The center’s hours are Monday through Friday 8 a.m. to 4 p.m.

Hungarian Revolution Plaque
In an opposite corner of the first floor of the Statehouse is a small plaque commemorating the revolution of October 1956, when Hungarians protested Soviet oppression and demanded a more democratic government. The Soviet Union quashed the uprising in a matter of days, and 200,000 Hungarians fled the country. More than 40,000 Hungarian refugees arrived in New Hampshire, and a group of Hungarian-Americans still visits the Statehouse each October.

Centennial Commemoration
Two floors above that plaque there is a large framed document celebrating the centennial of the United States government. Dated July 4, 1876, the document is signed by President Ulysses S. Grant, his cabinet, and all members of the Supreme Court and the United States Congress. Missing is the signature of Vice President Henry Wilson, the only vice president (so far) to hail from New Hampshire, who had died just prior to the centennial.

House Gallery
Visitors may opt for the elevator or take the stairs to the House Gallery overlooking the chamber that seats 400 representatives, making it the largest legislative body in the country. The gallery is open to the public whether or not the House is in session. Drew tags this spot as the best place in the Statehouse for taking selfies: “Where else can you stand overlooking the oldest House chamber, where the largest legislative body in the country meets?” 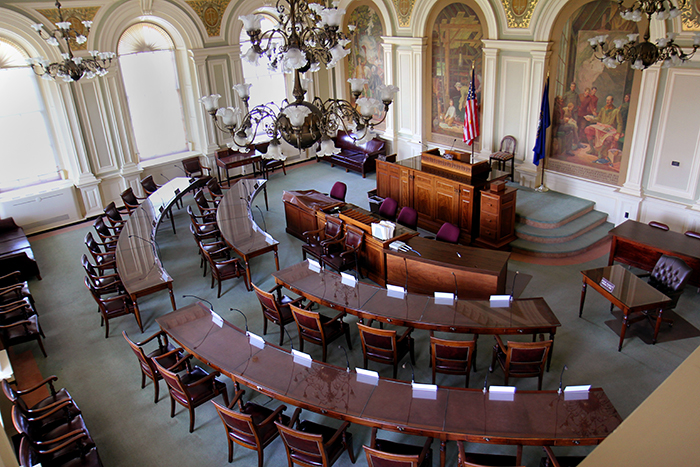 Looking down onto the Senate floor from the balcony

Senate Chamber
The Senate Chamber includes four tall murals painted by Barry Faulkner in 1942 and painstakingly cleaned during a renovation of the chamber last year. The murals depict the first commencement at Dartmouth College, Daniel Webster reading the US Constitution as a young boy, New Hampshire artist and scientist Abbott Thayer explaining his theory of protective coloration (which led to military camouflage), and John Stark preparing to mount his horse and go to battle. The murals are interspersed by scales of justice, which honor the chamber’s use from 1819-1895 as a regular meeting place for the state Supreme Court. 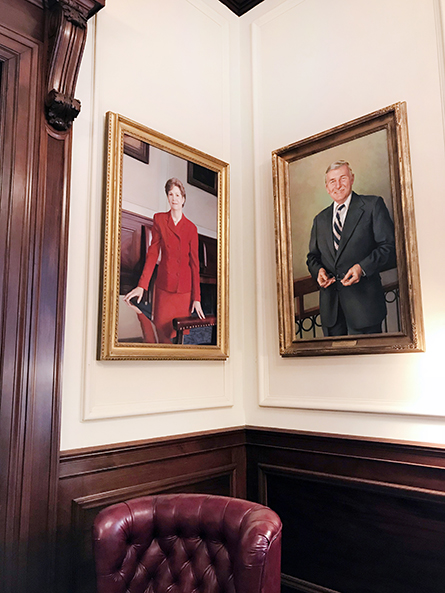 Sen. Jeanne Shaheen’s portrait is one of the nine that depict women.

Portraits
More than 200 portraits — historic and modern — line the walls of all floors and in many offices. Portrait subjects include three signers of the Declaration of Independence: Josiah Bartlett (the first to sign after John Hancock), William Whipple and Matthew Thornton. Only nine portraits are of women. They include Mary Baker Eddy, founder of the Church of Christian Science; Civil War nurse Harriet Patience Dame, who marched alongside men into battle and was twice captured by Confederate soldiers; and Marilla Ricker, who ran for governor in 1910, well before women could vote, and was the first woman accepted into the New Hampshire bar.

1819 Desk
Tucked between two tall windows in the Senate chamber is an antique desk crafted from birdseye maple by Concord furniture maker Porter Blanchard, who made much of the original Statehouse furniture. This desk is relocated to Secretary of State Bill Gardner’s office each presidential primary season and used by candidates to sign and file paperwork to appear on the ballot.

Dorothy Peterson’s Teacup Collection
Displayed in a glass-fronted cupboard behind Executive Councilor Andru Volinsky’s desk is a collection of more than 100 teacups and saucers from the collection of Dorothy Peterson, New Hampshire’s first lady from 1969-1973 when her husband, Walter Peterson, was governor. Drew says Mrs. Peterson would sometimes host tea parties in the dome of the Statehouse, which, by the way, is not open to the public.