The History, Legends and Progress of Manchester’s Urban Ponds

While the Lakes Region is a bit north of Manchester, the Queen City does have a number of its own locally-notable lakes and ponds that have played an important role in the area’s history.

Those sites – most of which carry with them fascinating histories and stories – are being celebrated in a new exhibit, “Manchester’s Urban Ponds: Past, Present and Future,” at the Millyard Museum’s State Theater gallery now through Nov. 28. (Note: Due to the coronavirus, the museum is requiring all visitors to wear masks and practice social distancing as well as capping the number of visitors at 30.)

“People are going to see a mixture of historic photographs and artifacts of all of the urban ponds in Manchester, as well as some new photographs and information on the Manchester Urban Pond Restoration Program, which is in its 20th anniversary,” says Jen Drociak, acting coordinator for the group. “We were able to combine historic aspects with recent endeavors.”

Since it was established in 2000, the the Manchester Urban Ponds Restoration Program has led cleanup efforts to help return the city’s ponds to their historic uses.

“Our original goal was just that,” Drociak says. “That includes fishing, boating, swimming – these goals were from 20 years ago. It’s somewhat hard to achieve because some of these water bodies have been degrading for 50-60 years. We have made progress in mitigating storm water runoff, providing better recreational access and restoring or providing better biological integrity. We restored Black Brook, and now it’s free-flowing for the first time in 100 years from the mouth of the Merrimack River to Dunbarton.”

This exhibit looks at the history of several of Manchester’s urban ponds and celebrates the accomplishments of the Urban Ponds Restoration Program over the last 20 years.

A 21 acre body of water at Crystal Lake Park just off Bodwell Road and Corning Road. It hosted city-sponsored swim meets in the 1920s, and a bathhouse first constructed in 1942 – and refurbished in 1987 – still stands at the pond today. 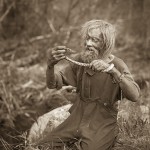 Known previously as Mosquito Pond, it was also notably the home of Charles Alan Lambert – the Hermit of Mosquito Pond.

Legend says that Lambert came to Manchester in the 1840s after a series of heartbreaks. He lived in a secluded log home he built on 40 acres he owned at Mosquito Pond for more than 60 years.

Over his many years at Mosquito Pond/Crystal Lake, Lambert grew herbs, which he provided to local pharmacists, and became a bit of a local celebrity – receiving many visitors over the years despite his secluded lifestyle.

He passed away in 1914 and is buried in St. Joseph Cemetery with a plain white tombstone bearing only, “The Hermit.” (If you want to visit the Hermit of Mosquito Pond’s final resting place, it’s in the Old Cemetery, section 3A, lot 535 at the corner of St. Marcellus and St. Bridget.)

Located adjacent to Livingston Park in the city’s North End just off Route 3, this 25 acre pond is surrounded by the Dorrs Pond Nature Trail.

Drociak has arranged for an 8-minute video showing historical footage from Dorrs Pond to be on display at the exhibit.

“It’s footage from the 1950s that shows kids ice skating on the pond, an ice skating contest and tournament, and people jumping over barrels,” she says.

Created by the installation of a dam on Black Brook in 1900, Maxwell Pond was named for A.H. Maxwell, who owned Manchester Coal & Ice Company. Ice was harvested from the pond in the 1930s and 40s. When the Manchester Urban Ponds Restoration Program helped to remove the dam there in 2009, a number of ice harvesting tools were recovered, and are now in display in the exhibit.

While it was a popular recreation spot through the years, upstream land uses have had an affect on it, according to the Manchester Urban Ponds Restoration Program. Today its maximum depth is just four feet. 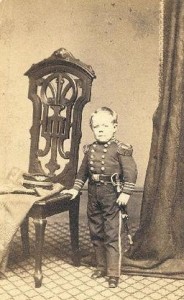 Commodore Nutt, for whom Nutts Pond was named, in 1865.

Known by several names before being renamed for a local circus performer – George Washington Morrison “Commodore” Nutt, the son of a farmer, who stood 29 inches tall. Nutt was discovered by P.T. Barnum, with whom he toured the world from 1869 to 1872. During those years, he met royalty and heads of state, including a White House meeting with Abraham Lincoln.

“We have some of Commodore Nutt’s regalia on display,” Drociak says. “We’ve got his pistola and boots and original paper dolls and a lifesize cutout. That’s probably my favorite, it’s such a cool story.”

Nutts Pond sits next to Precourt Park, along Driving Park Road off of South Willow Street.

Located east of Brown Avenue and abutting Manchester-Boston Regional Airport to the west, Pine Island Pond covers 42 acres and reaches a maximum depth of 15 feet. It was also home to a popular amusement park, Pine Island Park, which operated from 1902 to 1962. Drociak has secured artifacts from the amusement park, including old posters, tickets, postcards and photographs, and included them in the exhibit.

This 15 acre pond is just off of I-93 and Bridge Street has a maximum depth of 17 feet, and is part of Stevens Pond Park/Tom Padden Field.

“We thought it was important to have a three-dimensional component, so for Stevens Pond we have an original pair of Indian Head ice skates from the shoe manufacturer in Manchester,” Drociak says. “They’re pearl blue with fancy laces and we’ve got a hockey stick and gloves.”

Sponsored by City of Manchester, Department of Public Works, Environmental Protection Division, “Manchester’s Urban Ponds: Past, Present, and Future” will be on display in the Millyard Museum’s State Theater Gallery through November 28.