The Curious Story of the Taylor Sawmill

One man's quest to rebuild a piece of mechanical history 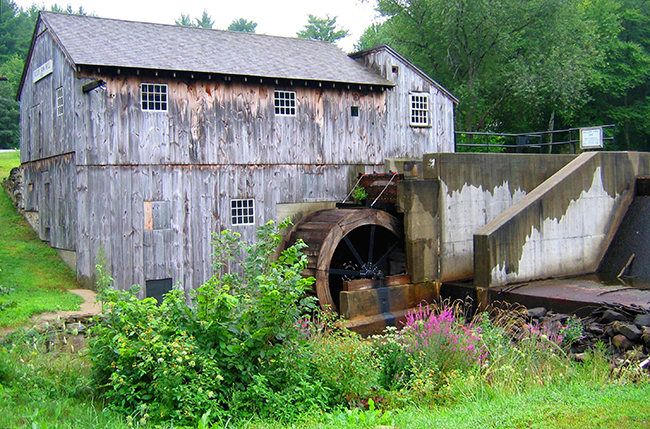 The sign above the door reads “Taylor Sawmill 1805,” but longtime locals know it as Old Man Ballard’s sawmill. The Taylor Sawmill, which is located in Ballard State Forest at the outlet of Ballard Pond in Derry, is named for Robert Taylor. He bought the property in 1799, built a mill and started sawing lumber in 1805, but Taylor’s mill wouldn’t exist today if it wasn’t for the dogged determination of an old man named Ballard.

Ernest K. Ballard was born in 1871 and was closing in on 70 years old when he decided it was time to retire. After a lifetime of market garden farming, he wanted to start doing the thing he had dreamed of doing since boyhood — building a working sawmill. And not just any old sawmill — he was going to build a waterwheel-powered “up-and-down” sawmill. Up-and-down sawmills are relics of the past that began vanishing from the New England landscape not long after the Colonial era. By the time of the Civil War, they were mostly gone, replaced by circular saws, which are faster and more efficient. 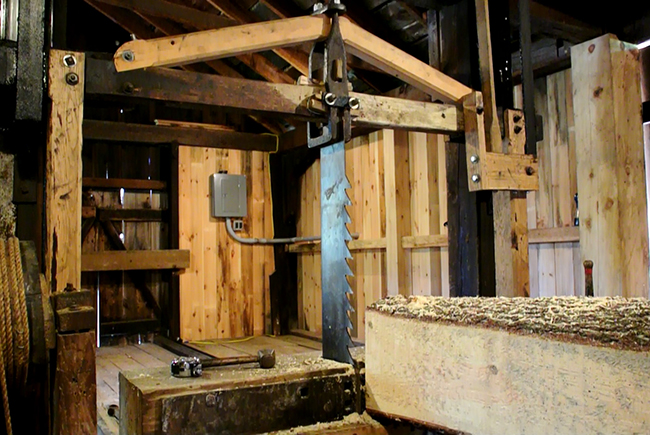 Ballard remembered seeing an up-and-down sawmill in his youth and appreciated the history and charm of it, so he determined he would build one in his retirement. At a stage in life when most people start look backward and thinking about slowing down and pursuing hobbies, Ballard looked into the future and started to think about pursuing an ambitious goal. In 1939, he purchased the property that had once been the site of Robert Taylor’s 1805 sawmill. The original mill building was gone, with only stone foundation remnants left behind. The millpond dam no longer held water, and the saw parts had been stripped off and sold for scrap metal. 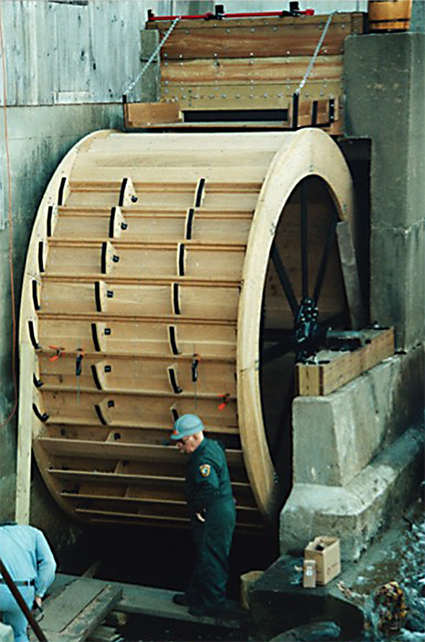 In 1979 the NH Division of Forests and Lands repaired the oak buckets and replaced parts of Ballard’s 1950 waterwheel with a bigger and heavier wheel. In 1999 Gary Stapleford of Nel-Tech Labs Inc. in Manchester rebuilt the wheel once again. Photo courtesy NH State Parks

The mill had last operated about 40 years before Ballard bought the place, so there was little left of it, but there were still people around who remembered what the mill had looked like and could describe it to him. An 80-year-old man who had worked in the mill as a lad drew a sketch of the waterwheel side of the building and another of the inside of the mill. A 90-year-old woman who had lived in the area as a girl described the building as she remembered it. From these descriptions, sketches and the residual foundation and dam remnants, Ballard drew a proposed mill building to scale and then built a scale model. Next he set out to build the real thing.

Ballard’s idea was to rebuild the mill as closely as possible to the 1805 original, and he spent the 1940s and ’50s rebuilding the dam, the mill foundation and the building itself. Photos from the 1950s depict men in funny hats and baggy bib overalls working on the building or using cable-driven equipment to move boulders, repair the leaking dam, construct a sluiceway and reconstruct the old mill foundation.

Ballard spent years looking for a waterwheel to power his new old mill. Unable to find a used wooden waterwheel or to get one constructed locally, he purchased a waterwheel for $3,000 from the Fitz Water Wheel Company of Hanover, Pennsylvania. Blueprints survive for this wheel and depict it as 6 feet wide, 12 feet in diameter and weighing about 1,000 pounds.

Ballard searched far and wide over much of New England for another up-and-down saw to put into his completed mill building, and he finally found one next door in Sandown. The saw mechanism had been disassembled some 50 years earlier, and the pieces and parts were stored beneath a barn. Ballard paid $180 for the parts and spent the better part of two years figuring out how to put it together. Parts were missing, and he searched across several states to seek out the missing components needed to put his mill into operation.

Finally, in 1951, when Ballard was a spry 80-year-old man, he fulfilled his boyhood dream and turned the control wheel in the 18th century-style sawmill, designed and built by his own brain and hand, and sawed out his first board.

The mill itself is a magical mechanical marvel. Giant pine logs go in, sawdust flies and boards and beams come out. All of it is powered by falling water in a process that has been described as mysterious as cows turning green grass into white milk.

Water dammed up behind the mill is released by twisting a wheel that raises a gate and shoots the water rushing down a sluiceway, falling into the oak plank buckets of the big overshot waterwheel, which starts it turning. Inside the bowels of the mill on the lowermost floor, the axle of the waterwheel turns a big iron gear, which drives a small iron gear, trading torque for speed. Then a hypnotic sort of motion begins all around. Gears turn shafts that spin pulleys that drive leather belts, which flap around and drive other pulleys. This action climbs to the middle floor where a giant flywheel with a long piston-like arm and heavy counterweight spins, converting rotary motion into up-and-down motion, which drives the pitman arms holding the sawblade. More pulleys clink and clank and turn ratchet wheels in a perfect synchronization converting circular energy into back-and-forth horizontal movement, which moves the log carriage on the upper floor into the saw blade going up and down. The mill is old and it makes a lot of noise, but the whine of belts and pulleys and the steady thump, thump, thump of the giant saw blade chewing through a log is rhythmic and almost musical. 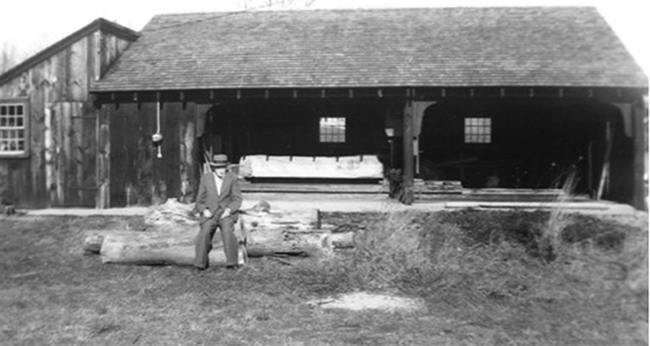 New England’s earliest sawmills were called “pit saws,” which required two men to operate them. They got their name because one man stood above a pit in the ground over which a log was laid, while another, the pitman, stood in the pit below. Each held the end of a long saw blade and the pitman’s job was to pull the saw downward, which supplied most of the blade’s cutting power, slicing the log into boards. It was dirty, dangerous, laborious work, especially for the man in the pit, who was at constant risk of the log falling on him, and who endured a steady shower of sawdust and dirt. No wonder the water-powered “up-and-down” pitman sawmills were such a welcome invention.

Today, Old Man Ballard’s Mill — or, more properly, the Taylor Mill — is under the administration of the NH Division of Forests and Lands. The property, including the sawmill, the caretaker’s house and over 70 acres of land, were generously donated by Ballard and his family to the state of New Hampshire in 1953. The mill is open to the public for demonstrations several times a year, offering a glimpse into the early days of New Hampshire’s sawmilling industry. Demonstrations are dependent upon the availability of water and logs. If no demonstration is planned, the mill still opens for tours at no charge. Stop in and see the mill run. Old man Ballard would be pleased.

Get There
The Taylor Mill Historic Site is located at 242 Island Pond Rd. in Derry. The site is open on the second and fourth Saturdays of the month from 10 a.m. to 4 p.m. beginning June 9 through September 22. There is no charge to visit the mill. Demonstrations are available on these dates but are dependent upon the availability of water and wood. If no demonstration is planned, the mill will still be open for tours on those Saturdays. Visit nhstateparks.org for more information on touring the mill.