Sometimes, the simple marking of a town line can be a curious affair 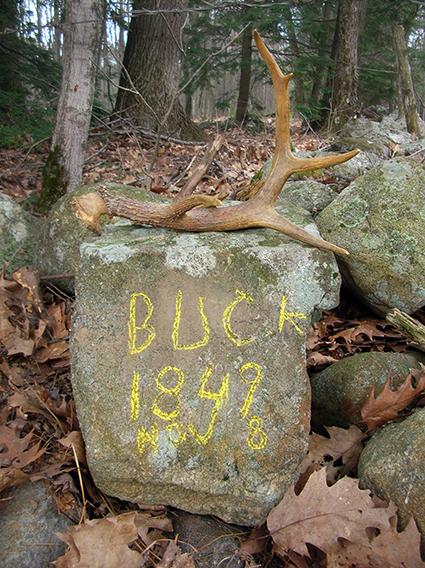 Marshall Hudson used a lumber crayon to highlight the carved words. And no, that’s not one of the original “buck horns” but it looks nice.

An old man came forward at the public hearing and told the legislative committee that he thought he could find the missing boundary marker. He also said that he thought he could prove it to be in the original location as established by the surveyors back in the 1720s. If the old man could actually do it, this would solve the committee’s dilemma, so he immediately had everyone’s attention.

It was the year 1770, and the proprietors of the towns of Gilmanton, Barnstead, Canterbury and Chichester had petitioned the New Hampshire General Assembly to settle a long-running dispute as to where the town boundaries were located. In particular, where was the point where the four towns all came together? The discrepancies between the individual town charters and the multiple surveys that had been done pointed to four different locations and created a gore of as much as three-quarters of a square mile.

The provincial governor and general assembly had appointed a committee to study the matter. The committee had studied it to death and still had not found a resolution, so they were holding hearings and soliciting input from anyone who might have credible knowledge that could help them establish the lost town boundaries.

As a camp assistant, his job was to cut firewood, lug water and help the camp cook while the surveyors were out blazing lines. Somehow he had gotten crosswise of the chief of the survey party for some offense, and he had been given a thorough thrashing for his transgressions. Feeling bitter and vengeful and seeking comfort, the boy got into the camp supplies and made off with a jug of rum. He hid the jug beneath a rock beside a tree with a town line blaze that the surveyors had recently placed on it. The rebellious boy returned nightly to his secret stash of pilfered rum to ease his loneliness. When the jug was empty, he left it hidden underneath the rock at the base of the blazed tree. 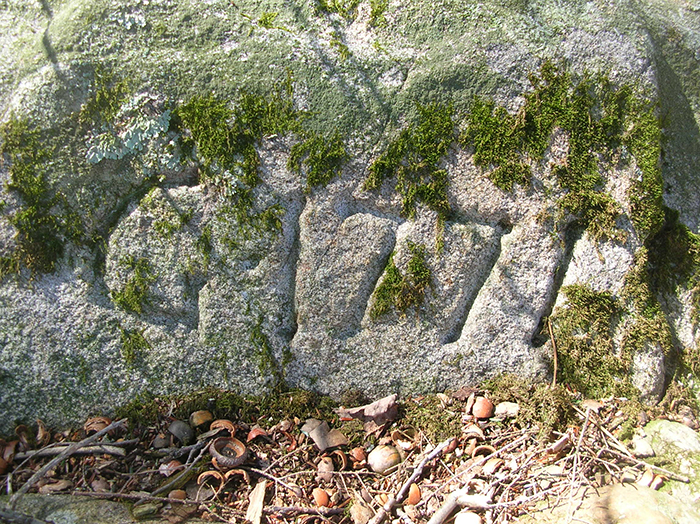 One of the stones from a previous survey reads 1771.

Now, that boy was the old man testifying before the study committee. The old man reckoned that if he could find the rock with the hidden empty rum jug beneath it and beside a blazed tree, it would prove where the original surveyors had marked the line and thus settle the dispute. The legislative study committee concurred and appointed a subcommittee to wander into the wilderness with the old man and recover this empty rum bottle.

As they searched for the rock with the hidden rum bottle, one of the searchers discovered a pair of recently shed deer antlers. Impressed with the 10-point rack, he picked up the antlers and carried them along as they continued searching for the rum jug. Eventually, they found the rock with the empty rum jug still hidden beneath it as the old man had described. The rum bottle was 100-percent proof that the old man knew what he was testifying to. When the committee saw this evidence, there were no further arguments and they confirmed the town lines to the point where the old man had said they were.

The recovered town lines were then re-surveyed and re-blazed, and the point marking the spot where the four towns came together was determined to be a large tree, either a willow or a beech, depending on which old document you choose to believe. The committee marked this tree with the initials of the four towns that cornered at that spot. Then, to further identify and distinguish the tree, and probably on somewhat of a lark, they bored holes into the sides of the tree and jammed the deer antlers that had been found into the holes, marking the tree with a pair of uniquely identifiable features.

Two years later in 1773, the town of Loudon was split off from the town of Canterbury. The inhabitants of the area felt that it was too far to travel to attend meetings and church services in Canterbury center, so they petitioned the government to partition the town into the Parish of Loudon. The petition was granted, and the metes and bounds description of the newly incorporated Loudon was written, forever preserving the Buck Horn tree into a written document thusly:

“Whereas a number of the Inhabitants of Canterbury in the County of Rockingham in this Province have Petitioned the General Assembly to be set off and erected into a distinct Parish agreeable to a vote of said Town set forth in said Petition. … Therefore be it enacted by the Governor Council and Assembly that all that part of the Town of Canterbury Beginning at the Northeast Corner thereof at the Buckhorn Beach Tree thence South West on the Head line of Chichester.”

Likewise, in 1783, the town of Pittsfield was split off from the town of Chichester. The net result is that the Buck Horn Tree monument today marks the point where the towns of Pittsfield, Barnstead, Loudon and Gilmanton all meet at a shared corner.

Through the 1800s, the towns perambulated their town bounds faithfully, and many of the old perambulation records mention the Buck Horn Beech or Buck Horn Willow tree. Dates and initials of these perambulations were chiseled into nearby witness rocks around the tree. One ambitious perambulation team from Loudon and Gilmanton reported carving “November 8, 1849” and the word “BUCK” into a rock three feet behind the Buck Horn Tree.

By the turn of the century (1899-1900), the Buck Horn Beech or Buck Horn Willow was getting old and tired. Some reports suggest that it had fallen down due to age and disease. While the tree may be rotted and gone, I reasoned that the nearby chiseled rocks might remain. I set out to find them with the ambitious goal of standing in four towns and two different counties all at the same time on this legendary bound.

It took some hunting and effort, but I found rocks with initials and carvings and chiseled dates. Some engravings were covered with dirt and moss and difficult to read. Some weren’t chiseled very deeply and multiple rocks in the area were naturally pockmarked or scarred. I poked around the area and uncovered a rock with some vague letters in it. I forced yellow lumber crayon into the grooves to make out what it read. Slowly, “BUCK, 1849, NOV 8” emerged. I’d found the Buck Horn Bound. And no, there was no jug of rum beneath it.