We are from here, so when we moved there, things got weird — especially around the holidays 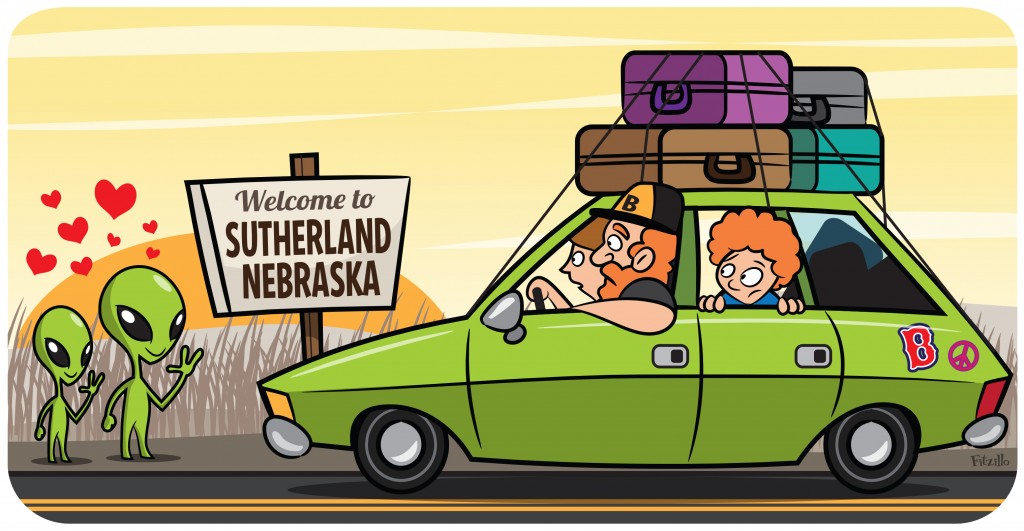 In the late ’70s, our family was very much a New England unit — we lived and breathed the Boston Bruins, ate brown bread and baked beans on Saturday nights, and watched Uncle Gus on TV.

Then we moved to Mars.

My father worked as a cement finisher. The economy had turned sour for those who pursued the concrete arts, so following a job offer, my parents piled four kids and a dog into our light green AMC Hornet, scientifically proven to be the most ’70s of cars, and relocated us to a place called Sutherland in western Nebraska. Both I-80 and the Platte River snaked by just to the south of this (quite literally) one-road town, and the coal-burning plant under construction — and the reason for the town’s recent and ultimately temporary population increase — lay just beyond.

There are romantic stories of the untamed, open prairie — a place of unlimited possibility and adventure. This was most definitely the prairie, but instead of wild horses and wagon trains, it was mostly full of sand spurs and prickers that embedded into the cuffs of our Toughskins and kids from other parts of the country who thought we were speaking another language entirely.

In my short life to that point, I had never thought any place so completely foreign could exist. The people from the land of the Pilgrims and tonic had been transplanted to the land of the Oglala and the Pony Express. One day my brother and I were skating on a pond near the road. It literally stopped traffic. When they opened the first McDonald’s in Omaha — more than three hours east — it made the nightly news. People were fascinated by our accents. One woman told me we sounded “just like the Kennedys,” which wasn’t true because no one really sounds like that.

Everything normal felt very far away, especially since we were just sitting around not playing hockey, watching the Sha Na Na variety show because that’s all that was on, and waiting around for someone to invent the internet and cell phones.

So when Thanksgiving arrived, the urge to go back home was never more intense. The move was meant to be temporary, so we only had what we could fit into the Hornet and a tow-behind UHaul. We had to make the best with what we had — which, in retrospect, actually added to the charm of our situation. At the time, however, it was a scramble to assemble something resembling a traditional Thanksgiving dinner. That meant our first year out west, we’d be having ring-necked turkey.

Pheasant sounds like an exotic alternative to a holiday gobbler. Only ours wasn’t served under glass. Or with crostini and goat cheese crumbles. Or good. Even now, with nearly four decades separating us from the arid poultry, my palate weeps.

I don’t blame the chef, who was as much a frontier mom as Caroline Ingalls. Besides, it wasn’t so much about the meal, but the fact we were strangers in a strange land, together.

Since then, the world has gotten a lot smaller, Bowzer has become a politician, and every year in late November we talk about Nebraska turkey. The bird was dusty, the potatoes were runny, and the Burkes were far, far from home, but it was a time none of us would trade for any canned brown bread.