Sarah Fortin, handweaver, is not bridled by tradition. She has pushed the ancient art form  beyond traditional patterns and purposes. It’s eye-popping to discover just how many ways vertical (warp) and horizontal (weft) threads can interconnect.

Interestingly enough, commercial Jacquards were the first instance, of a sort, for computer-aided design. Although handweavers are now able to use computer guidance, Fortin, of Mason, has eschewed the trend. Rather, she has discovered uses for traditional patterns and unconventional fibers, tweaking the limits of handweaving looms.

Fortin has repurposed commercial glass threads that were originally designed for reflective clothing. The fine threads, composed of tiny glass beads, add a surprising element of glimmer to her yardage piece called Shuttered Reflections. The entry recently won Best in Fiber in the Living With Crafts exhibit at the 2014 New Hampshire Craftsmen Fair in Sunapee this past August. 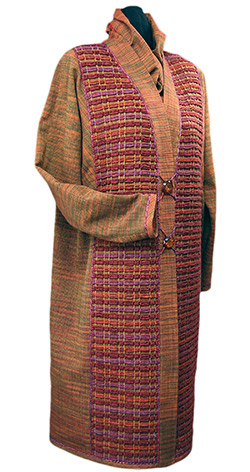 Amazingly, she has also created three-dimensional pieces on her modified loom using fine metallic threads — fine silk thread plied with even finer steel strands. The need for different tensions required bags of sand and jury-rigged beams on her traditional two-beam, eight-harness loom. She was able to add a third layer of metal threads in the warp and the weft, which she could manipulate into gathers woven directly into the piece.

Fortin, with a degree in textiles and clothing form Washington State University near Spokane, also uses her creative yardage for hand-sewn clothing. She just received a third place for a jacket at the Handweavers Guild of America’s Convergence conference in Providence, a national competition. She also teaches weaving through the NH Weavers Guild in the state and beyond.

The “Gifts From Our Hands: What We  Do Best” show at the League of New Hampshire Craftmen’s gallery in Concord will feature two of Fortin’s pieces. The exhibit opens October 10.

The Best Places in NH (for Everyone in Your Life)

Redistricting in NH May Favor Republicans

How to Stop Doomscrolling and Feel Better

A Love Letter to Seabrook

The Summer of LaBelle

Goffstown is a Small Town With a Lot Going On

Pocket Gardens Tour of Portsmouth Returns for Its 32nd Year

The Best Places in NH (for Everyone in Your Life)