A new book teaches kids that dance is for everyone 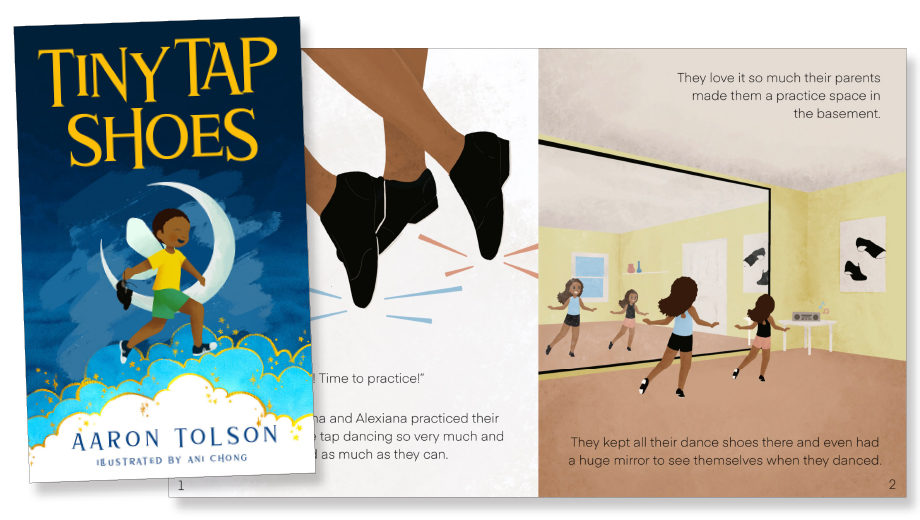 Once upon a time, there were two little girls who one day found a teeny-tiny pair of tap shoes and some fairy dust in their house. This is where the magical adventure begins.

“Tiny Tap Shoes” is a children’s book written by Aaron Tolson, who achieved fame the world over as a tap dancer and is a renowned full-time faculty member at the Boston Conservatory at Berklee. The performing artist and professor has taken the next step to published author. 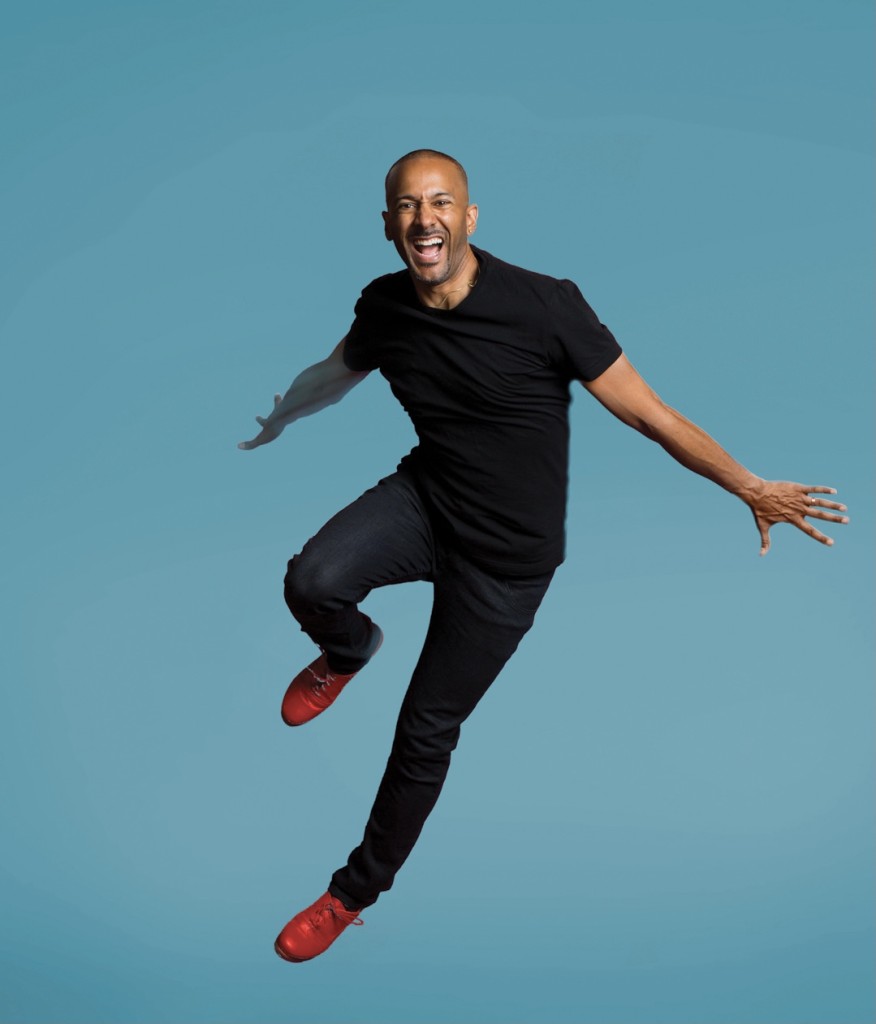 “Born to Tap, Love to teach! Daddy of 2 … I do believe I have a little Jedi and super hero in me. May the force be with you.” — Aaron Tolson
Photo by Bernardo Nogueira

“I wrote this book for my children,” says the father of Alexis, 8, and Charlotte, 6. “They’re the influence, and the muse, and the critics. The whole way.”

The main character in the story is Steve the Fairy, who just loves to tap dance. On his journey he is helped by sisters Alexiana and Charliana, and he teaches important moral lessons about kindness and friendship along with a true appreciation of the art form. The book is full of wonder, inspiration and imagination, and the message is that dance is for every child, regardless of gender.

“My girls are really into mermaids, unicorns and fairies,” Tolson says. “We were reading books before bed, like we always do, and then I started telling them stories, and they always featured this main character over and over again, and it was Steve the Fairy. I was telling the stories off the top of my head constantly, and then I got into a groove of what he was and the world that he lived in,” he says.

Tolson and his wife, Emily, who was Miss New Hampshire 2006, live with their daughters in Bedford, and that is where the story is set. Steve the Fairy makes his home inside the Inside Scoop, and it was during an outing to the local ice cream shop right before the pandemic lockdown in 2020 when this tap-dancing fairy took flight.

“The day that Steve came into existence and became real to me and real to the girls was when we were at the Inside Scoop. It was March 13, the last weekend before you couldn’t go anywhere,” he continues. “We were sitting inside this building that’s got these little holes in the wood from the trees, and I’d always told the girls that’s where the fairies live. That day I said that’s where Steve the Fairy lives. Then Steve started appearing in all the stories. He lived in a little hole in the wall, which I still reference to this day. That’s where he lives. That’s where he goes. That’s where he comes from.”

Tolson comes from Manchester, where he was a record-setting track star at Memorial High School before earning a full scholarship to St. John’s University and establishing collegiate marks in track that stand to this day. Earlier in life, he was a child actor and tap prodigy, and by age 14, he was performing at the famed Apollo Theater in Harlem alongside tap superstars Savion Glover and Gregory Hines. He went on to perform on Broadway and was a soloist on the worldwide tour of “Riverdance” for six years.

Reaching this stage of his illustrious career is the result of his talent, artistry, creativity and intense competitiveness.

“I think this is the next step of what I’ve been doing my whole life. I’m a crazy person. There is never enough for me,” says the author, whose older sister is 1996 Miss New Hampshire, former Radio City Music Hall Rockette, and acclaimed dance instructor Michelle Tolson. 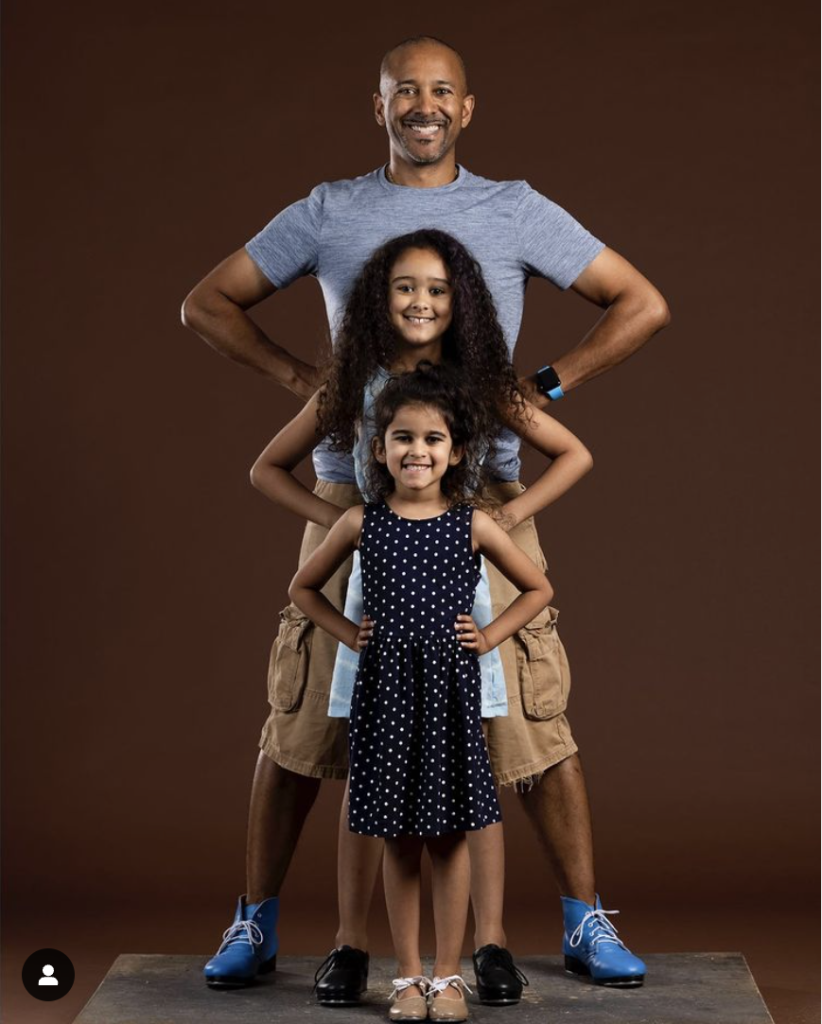 Aaron Tolson with his daughters Alexis, 8, and Charlotte, 6, who were the inspiration for writing “Tiny Tap Shoes”
Photo by Ryan Smith

“Tiny Tap Shoes” is delightfully illustrated by Ani Chong and was released in December. It is available on Amazon ($7.98 in paperback or $2.99 for the Kindle version), where 95% of its reviews earned five stars, and the book is selling very well despite the fact there has been no paid advertising. Tolson’s first effort is such a success that by March he was in talks with a major network to turn Steve the Fairy into an animated children’s series, was working on the sequel, and had written the outlines for a four-book series.

“I’m blown away that my bedtime stories have turned into this. I’m shocked, excited, and even humbled, honestly. I thought this story was fun and cute and wholesome and had good messages. But these made-up bedtime stories have turned into this real, incredible adventure,” says Tolson, who is also producing a new tap dance show set to debut in the fall. “My life is cosmic right now.”

May 25 is National Tap Dance Day, and the date was chosen because it’s the birthday of the immortal Bill “Bojangles” Robinson, one of the most significant contributors to tap as an art form. This month, Tolson is continuing his book tour and thinks it’s a fitting way to honor the legend.

“I’ve gone into kindergartens and read my book to kids, and their reactions and their laughter bring such joy to my heart that they see this, and they love it. I’ve had people tell me it’s their kids’ favorite book. It’s great. It’s magical. What a fun feeling,” he says. “I’ve done shows and things in my life with the intentions of making money doing those things, but this was a labor of love. This was for my girls. I just wanted to follow through with what I said we were going to do. Then, as it developed, it turned into this wonderful story and I’m really excited to share it with the world.”