This New Hampshire distiller adds venison whiskey to their lineup 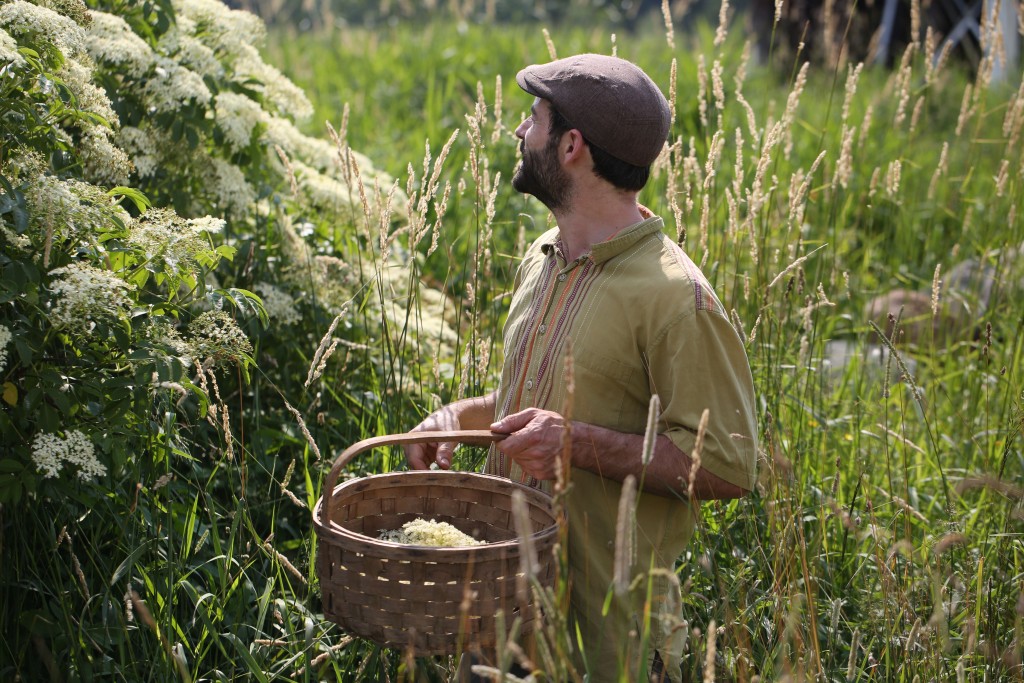 Distiller Matt Power forages for natural ingredients that will go into the scratch-made, artisanal spirits at Tamworth Distilling. Photo by Quaker City Mercantile

Flavored spirits aren’t new. Distillers who fancy themselves inventive have come up with concoctions like jalapeño and mango tequilas, and sippers that are flavored with grapefruit, blood orange and even whipped cream.

The mad scientists at Tamworth Distilling live in a bold world where durian fruit, venison and beaver secretions are just another part of the recipe.

Birthday cake vodka seems tame all of a sudden.

“We allow ourselves to explore the nontraditional,” Tamworth distiller Jamie Oakes says. “If it falls under the House of Tamworth line, we work in small releases and small bottles. There isn’t necessarily wide distribution, so we can take a small amount of liquid and say, ‘Let’s do something weird with it.’”

Weird, maybe. But also somewhat groundbreaking and definitely interesting. It’d be an unlikely exchange for someone to say, “You know what this whiskey needs? Deer meat.” But it’s just the kind of thing you might hear within the walls of the House of Tamworth — the distiller’s experimental line of unusual spirits.

Deerslayer Venison Whiskey would fit that bill. Set in motion after Tamworth owner Steven Grasse was inspired by James Fenimore Cooper’s novel, “The Deerslayer,” it’s a whiskey flavored with the flora and fauna of New Hampshire. The focus here, however, may fall a little more on the fauna side of things. Oakes and the team start with an aged white wheat whiskey that’s been rested for three years in standard 53-gallon barrels. Next comes the venison. Sourced from Bonnie Brae Farms in Plymouth, hand-chopped red deer venison is tossed with cranberries, porcini mushrooms, juniper berries and green peppercorns. It’s fermented overnight to accentuate the meat’s gaminess and then slow-smoked and infused into the whiskey. Final distillation takes place in a rotary evaporator, which is more commonly seen in pharmaceutical laboratories, but is perfect for pulling aromatics. Think savory, smoky with a subtle spice, and a lingering finish. 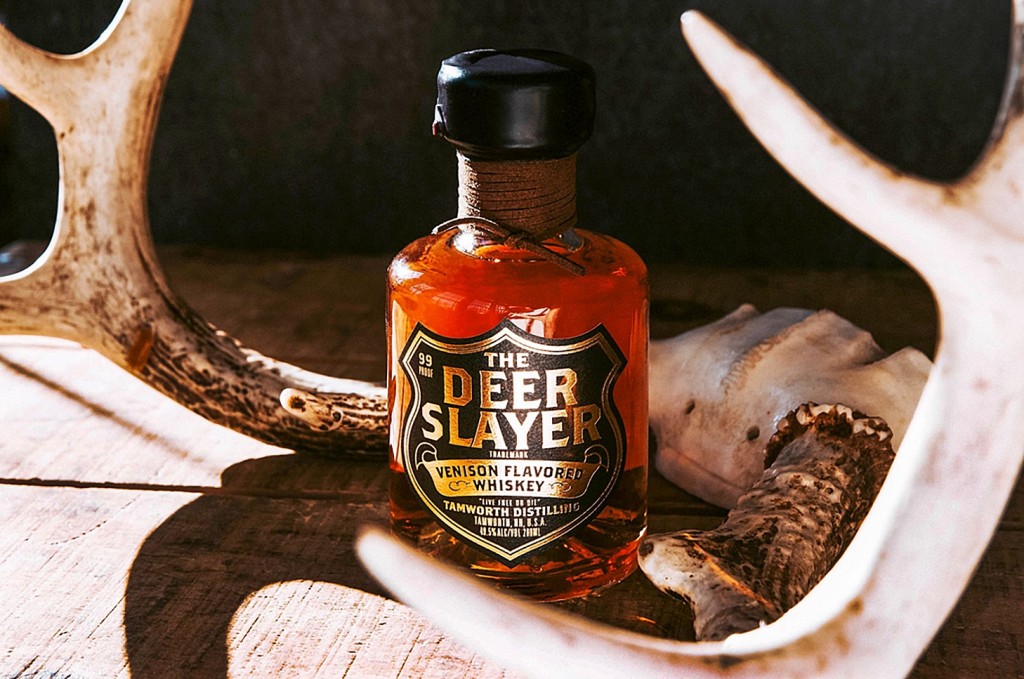 “It tastes like you’d imagine — like venison,” Oakes says. “It’s got a few supporting role characters that are helpful as far as flavoring. Matt Power [fellow distiller, trained organic chemist and accomplished organic pig farmer] did a lot of the meat processing because it’s his forte. He fermented it with a sausage culture and smoked it heavily. When you distill something, a lot of those heavier flavors are left behind, so getting it to pop over into the spirit can be troublesome. But the meat is there and present since it’s heavily smoked. There’s also the porcini mushrooms, the juniper, peppercorn and cranberry, which adds more of a backbone. It’s a lot less mysterious than you’d think.”

Perhaps less mysterious than House of Tamworth’s Eau De Musc, a whiskey flavored with castoreum, a secretion that comes from the beaver’s castor gland and is used to mark its territory.

“That one is quite interesting because it surprises people,” Oakes says. “They’ll make a wince face before they try it. But then they’ll sip it and there are very familiar flavors.”

The castoreum oil extract produces leathery, raspberry flavors that blend perfectly with two-year aged bourbon, birch oil, raspberry and Canadian snakeroot — a woody spice not unlike ginger. It all results in a fruity, warm and crisp whiskey bottled at 88 proof.

“It’s got this creamy, raspberry flavor and a little bit of a texture to it,” Oakes says. “It’s interesting in its own right because it has birch tar oil too, which gives it an almost birch beer quality.”

Even the Eau De Musc sounds mild when it comes to Tamworth’s Corpse Flower Durian Brandy. The corpse flower is a rare plant that can grow up to 12 feet tall, take a decade to bloom, and emits a foul smell described as being like rotting meat. Durian is a large, green fruit native to Asia that’s known for flavors and aromas that emit either appreciation or intense aversion. Delicious, right?

“Steve lived in Southeast Asia for a bit, so the idea of a durian fruit spirit was the driving force because it didn’t exist and it’s such a polarizing fruit,” Oakes says.

The beauty of it, then, is that it rewards the curious. 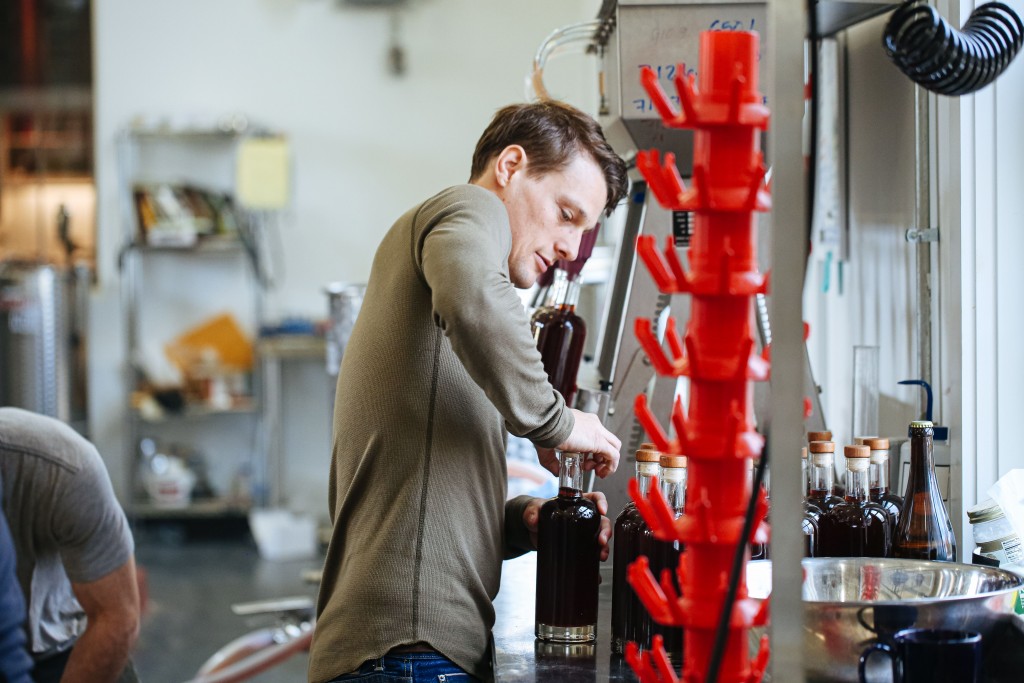 “The label helps describe that it’s going to be a little bit of a challenge, but people are surprised,” Oakes says. “Some of the tougher flavors attributed to the durian are fleeting. When people first experience the typical sulfur contributions that you get when you put it in a snifter and get a whiff, they may feel like maybe they’ve bitten off more than they can chew. But if they allow it to open up, those more egregious characters flow away and what’s left behind is more interesting.”

Tamworth doesn’t add sugar to the brandy, so the result is dry and fruity, with the durian and indole fragrances adding another layer of interest.

“A lot of the House of Tamworth stuff is for the adventurous drinker,” Oakes says. “When you reach for a bottle like that, you know you’re going to be trying something new.”

The distiller’s advice on how to approach these flavors: unadorned.

“Usually neat,” Oakes says. “You could definitely use the Deerslayer in a spirit-centric drink like a Manhattan or an old fashioned, but with most House of Tamworth spirits — Castoreum and Corpse Flower — they’re best expressed on their own in a snifter as you would a regular dram of whiskey.”

Sweet with Notes of Granite