Backyard sports provide a healthy dose of community and competition 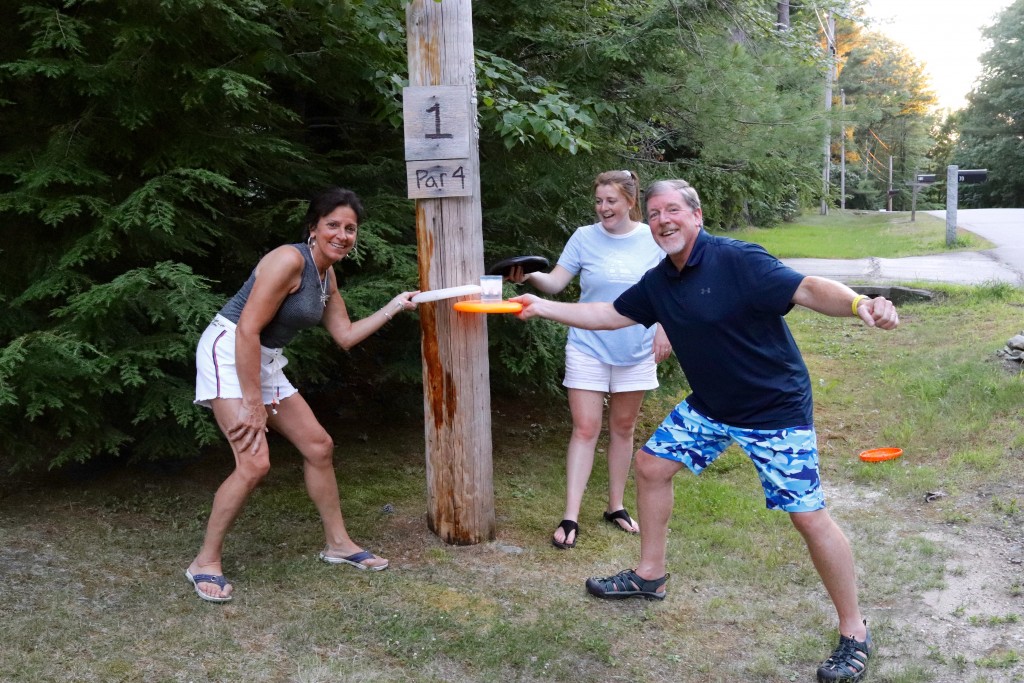 Some say that Frisbee golf is the new golf. Actually, no one says that, but in my neighborhood growing up, it might as well be. Weekend block parties, nightly walks around the loop with friends up the street, Patriots game driveway viewings, potluck dinners and holiday decoration extravaganzas (Halloween might be our specialty), were all the norm, so it only made sense that my dad would build a Frisbee golf course as another way for the neighborhood to come together for good company and good fun.

Using old pieces of plywood, paint found in our garage and neighborhood telephone poles for targets, he went out and transformed our neighborhood circle into a nine-hole Frisbee golf course. There is one par-3, two par-5 and six par-4 holes, with the most difficult hole of the bunch being the ninth hole due to its T-shot downhill, with all remaining shots being uphill. The game itself brought its own excitement, but the added challenge of avoiding hitting people, cars, house windows and newly planted gardens when playing provided another level of entertainment and difficulty.

Sundays became the day for everyone to bring a drink and their Frisbee and meet up at the bottom of our driveway for a round of golf. While personally I have only played once (I am really good at holding drinks, keeping score and providing Jim Nantz-level commentary), it is still one of my favorite neighborhood traditions and summer family activities to participate in. Whether you are a new or seasoned Frisbee golf player, it’s a fun sport to try while you connect with neighbors, family and friends. The best part about it? Anyone can play, it’s easy to access, and it doesn’t require you to be an athlete. While it may be one of the more popular outdoor summer community sports, it isn’t the only game in town. To make the most of the end of the season, I’ve rounded up some of my favorite fun summer sports, ideal for enjoying (socially distanced) outside with family, friends, and maybe even a few of your neighbors. 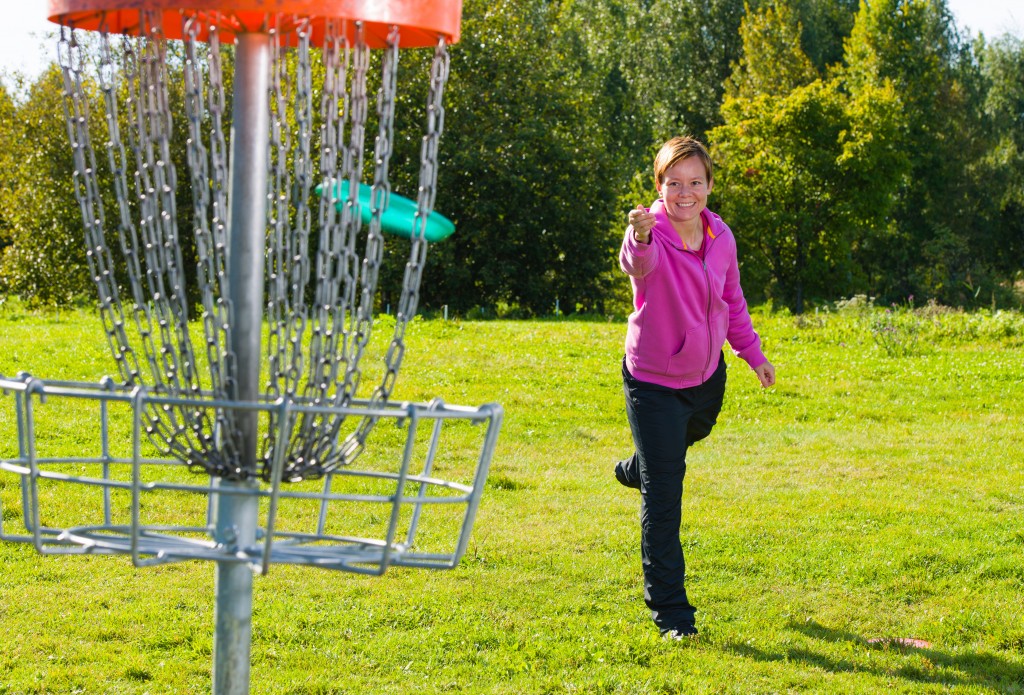 Disc golf is played a lot like golf, but instead of clubs and balls, players use a flying disc and aim for a metal disc golf basket. Photo by Jari Hindstrom

Different than Frisbee golf, disc golf is a game where a small, dense disc designed to travel long distances is thrown into a series of metal baskets situated on an outdoor course. The object is to complete the course using the fewest possible throws. The disc is thrown from a tee area to a target, which is the “hole,” and as each player continues down the fairway, they must make each consecutive throw from the spot where the previous throw landed. The various terrain changes, and trees and bushes located in and around the course add challenging obstacles for the golfer to navigate. Finally, the hole is completed when the “putt” lands in the basket. If you are looking for mental stimulation, a unique group activity and even a bit of aerobic exercise, this sport is for you — no matter your age or skill level.

If you’d like to try your hand at disc golf, check out discgolfscene.com for a full list of parks, recreational areas, camps, resorts and farms that have their own disc golf courses near you. Top O’ the Hill Disc Golf in Canterbury and Breakin Chains Disc Golf in Manchester are two fan favorites that you should check out. If you are looking to participate in disc golf tournaments beyond weekend games with friends, join Live Free and Drive Tour for one of their fun tournaments. The Tour is a seasonlong series of lively, competitive disc golf tournaments that cater to players of all skill levels throughout the region. It is made up of some of New Hampshire’s best courses and culminates in a championship event at the end of the year.

Wiffle Ball was created to be a miniature and simplified version of baseball. Fans of baseball or softball may be thinking they don’t typically have three hours (or more) to dedicate to a full nine innings, but wiffle ball is usually just six. All you need to play is one wiffle ball bat, a couple of plastic wiffle balls and between two to 10 players. It is recommended that you play with a team of 10 players so you can do two teams of five, each consisting of a catcher, a double area fielder, a triple area fielder and a home run area fielder. When you are measuring the field to play on, make sure that it is in the shape of a triangle (as big as you want) with the upper point as the catcher and batter’s box, and the pitcher’s position a few strides past that. The outer lines of the triangle should also be divided up into the double area, triple area and home run area. The scoring might be the same as baseball, but there is no base running in wiffle ball. This means that the game emphasizes catching and hitting skills, but that doesn’t mean that if you don’t have either of those skills that you can’t play — players young and old can play and become pros in no time at all.

If you are looking for more of a challenge beyond setting up a local game with friends and raising money for a young child with a medical condition while doing it, head to Concord every September for NHTI’s Annual Wiffle Ball Tournament. Even though this year’s tournament was canceled, you can still start or keep practicing for next year’s tournament. 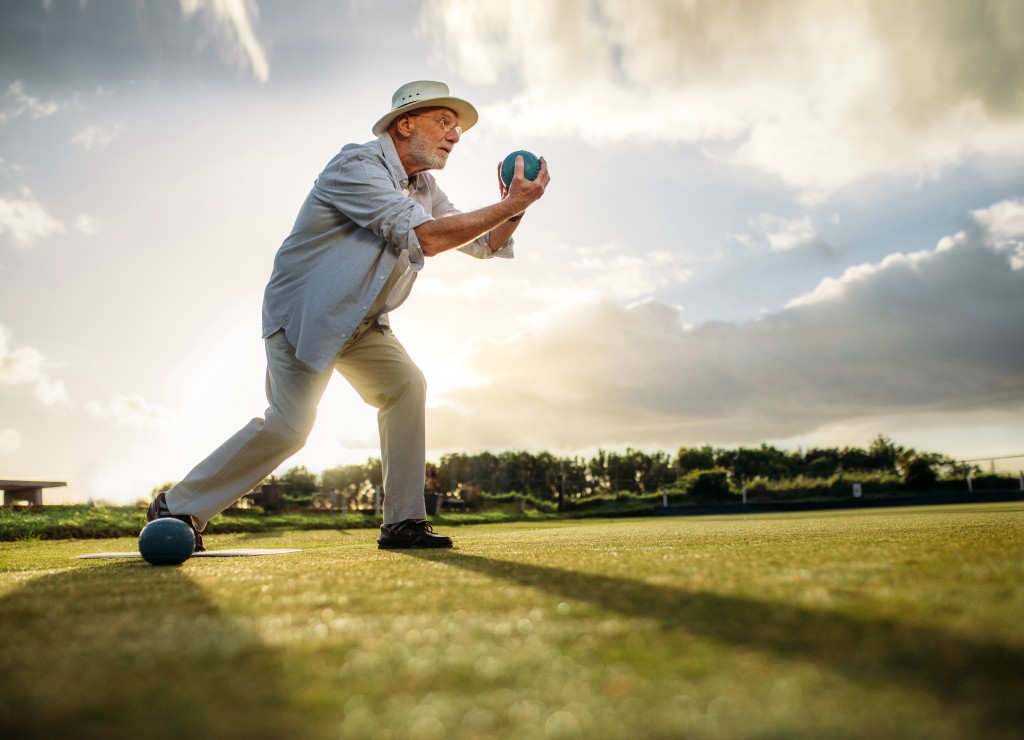 Backyard sports like bocce are a great way for small groups to connect and spend socially distanced quality time together outdoors. Photo by Jacob Lund

Bocce is one of the most widely played games in the world. The game is simple, it can be played by people of all ages and skill sets, and you can use just about anything as a bocce court. It can be played on any stretch of level ground like gravel, grass, pavement, a patio, a sidewalk, etc.

You can play with two players, but it is a great team game and is best played with a team of eight and four members on each team. To start, buy a bocce set that includes one pallina (smaller ball), eight larger bocce balls (four each of two different patterns or colors), and create a bocce court that measures 76 feet long and 10 feet wide. The rules for backyard enjoyment are easy to follow and pick up for those who haven’t played before. Before you start, determine which team will go first and establish a foul line that you can’t cross when throwing your bocce ball. The first player will then toss out the pallino, and the next player begins by throwing out a bocce ball attempting to get as close to the pallino as possible. The next player then tries to get their ball closer to the pallino than the first player. If they do, their ball is called “inside.” The next player or team continues until they have thrown all of their balls or gotten a ball “inside.” The game is over when all bocce balls have been thrown. Points are then awarded to the team with the most “inside” balls, and they are the only ones who can receive points. The first player to reach 13 points wins. (You can also pick a lower score if you want the game to move along so you can get back to grilling.)

Looking for extra fun this summer? Check out these family-friendly lawn games.

Cornhole
A classic summer game, cornhole is a lawn game where players take turns trying to toss bean bags into the holes of the opposite raised board. You can buy your own set, or get adventurous and creative and make your own.

This backyard game is easy, lightweight and a guaranteed crowd-pleaser. Players have three “bolas” each, which they toss on the ladder rungs to gain points. Don’t forget that you can also knock off your opponent’s bolas to steal from their score.

This game is a lot like volleyball, but it doesn’t come with the hassle of setting up a volleyball net. Play the two-on-two game by bouncing a ball off the net for your opponents to then get three passes to return the ball back to your team. If they miss, you score, and the first team to 21 points wins.

Kan-Jam Ultimate Disc Game
If you don’t feel like setting up a Frisbee course in your neighborhood or if you are looking for extra throwing practice, this four-player game is for you. The game consists of two flexible plastic cans with an open top and slotted front, and the goal is to hit the can with the disc, shoot it through the slot, or have your teammate help with either to get points. The first team to 21 wins.

Jumbo Connect Four
Here’s another example of a classic indoor game that has become a giant outdoor version. The same rules and pieces apply, but this two-player game feels more fun when it’s 4 feet tall.

Giant Jenga
Take this game from your living room table to your yard with the super-size version to play outside. The object is the same: Remove and stack the blocks without the tower toppling over.

Bocce ball is also known as Italian lawn bowling, with the first Italian league formed in 1947.

Wiffle ball was born in 1953 when David Mullany designed a ball that curved easily for his 12-year-old son.

There are more than 8,000 disc golf courses worldwide.

Original Frisbees were premade metal pie tins, and W.F. Morrison was the first to make the Frisbee out of flexible plastic.

The first documented game of bocce was in 5200 BC in a painting in an Egyptian tomb.

The typical wiffle ball weighs around 2 grams, compared to a golf ball that weighs 46 grams.

Disc golf was formalized in the 1970s by “Steady” Ed Headrick.

The modern Frisbee was invented in southern California and sold for around 25 cents.

Categories: Summer Sports, Things to Do