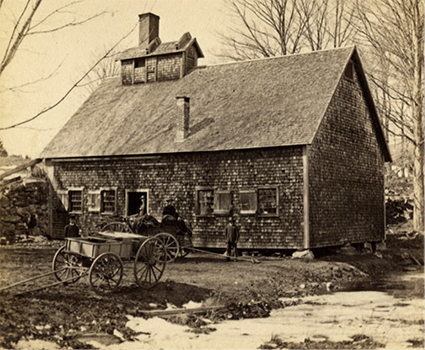 The Church Family built this maple sugar house with living quarters. Note the retaining wall on left end of building.

I had a lot questions. I was two miles deep into the woods northeast of Canterbury Shaker Village when I stumbled into an unusual complex of old cellar holes, massive stone foundations, beefy rock retaining walls, piles of used bricks, an abandoned well, and some other rubble left behind from what was once a thriving operation of some kind. Who built these structures and for what purpose? How did they gain access to this remote section of nowhere? Why was the operation abandoned? What happened to the buildings? As I poked amongst the remnants, I had many questions to ponder.

I found an answer in the 1800s writings of a young man named Nicholas Briggs. In 1852, at 10 years old, he moved from Rhode Island to live at Canterbury Shaker Village. He remained there for the next 40 years. Upon arrival, Briggs and his mother were separated, as the Shakers believed in celibacy and prohibited the genders from living together, making no exception even for a mother and her young son. Briggs’ mother went to live with the Shaker Sisters in the North Family, while young Briggs went to live with the other boys in the Church Family. It seems that his life with the Shakers was not a completely unhappy one, but he does express a void in his life as a lonely young man looking to his future. In his book “Forty Years a Shaker,” he writes, “What really had I to look forward to except a monotonous round of drudgery from one year’s end to another, and to what purpose?”

Learn more about the Shakers’ sugaring operation from a local historian and see the process in action as North Family Farm demonstrates making maple sugar at the 2018 East Canterbury Maple Festival.

As a Shaker, he would not be permitted to meet a girl, fall in love and get married. He would never have children. He would never go away to college or trade school. He would never have his own business. He’d never own a house. He would never accumulate any possessions or wealth, and would never retire to travel or play with grandchildren. The desire for personal independence, freedom to go and to come at their own sweet will, to earn money and to spend it without dictation is the natural desire of the young man. But the Shakers say “no,” he writes.  While Briggs was comfortable as a Shaker and happy at times, there was little to look forward to in his life.

What he did look forward to was the changing of the seasons each year, and with them the changes in routine that took place within this farming community at Shaker Village. Spring planting, summer haying, fall apple picking, winter ice harvesting and making maple syrup were all seasonal chores that broke up the routine.

For the Shakers of the late 1800s and early 1900s, the production of maple syrup and maple sugar was an important enterprise. With hundreds of mouths to feed in their community, they needed to produce enough maple syrup and maple sugar to supply themselves with their needed sweetener for the entire year. Maple was also an important cash crop for the Shakers, as they sold whatever surplus they were able to produce to the outside world. Syrup quantities were measured in barrels, and maple sugar was produced pound after pound for storage or sale. This was hard work, demanding long hours during the short season when the sap was running. 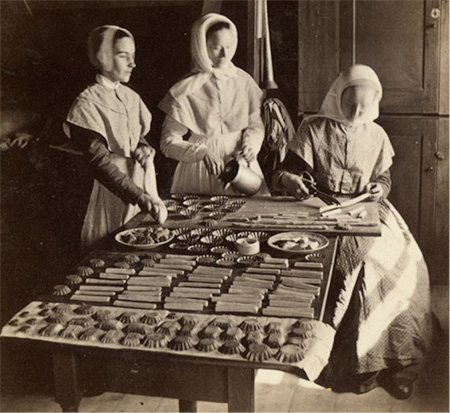 Rather than gather the maple sap and haul it back to the village to be boiled down, the Shakers found it more efficient to temporarily move out of their village and into “sugar camps,” where the maple trees were plentiful. They’d live at these remote camps for the four to six weeks while the sap was running. In addition to living quarters, each camp had a maple sugarhouse for boiling the sap and a number of other outbuildings as were evidenced by the foundations I found.

At the sugar camps, the Shaker brethren took turns gathering sap, tending the oxen, and staying up nights feeding the fire and boiling down the sap. Shaker boys tapped trees, collected sap, hauled firewood and drew buckets of water from a dug well on site. Shaker Sisters cleaned pots, buckets, and barrels, prepared the meals served in the camps and made maple candy for resale. Because these sugar camps were remote and staffed by a small number of busy Shakers, the boys may not have always been under the close watchful eyes of the strict Elders like they were back at the village. Briggs suggests that living conditions were more relaxed at the sugar camp, and perhaps there was even an opportunity for a teenage Shaker boy to catch the eye of a teenage Shaker girl.

Whether such an encounter took place is a matter of pure speculation, but Briggs describes maple syrup season and life in the sugar camp with a glowing warmth and affectionate tone:

The maple sugar season began soon after school closed, and it was an interesting time for the boys. They always were in requisition to assist in distributing the buckets to the trees and driving the spiles in the holes bored by the brethren. A company of sisters went down at the same time to scald the buckets and start the sugar makers in a cleanly way. To the boys it was a pleasurable time; the walk to the camp two miles away; and the wading through the deep snow with the buckets, a thousand of them. It was work, but it was fun. The dinner was extra good. The sisters made griddle cakes and these were served ºwith good thick maple syrup from a jug kept over from the previous season.

When the sap flowed rapidly, two of the home brethren would go down to tend the kettles all night, taking turns at boiling and sleeping. When our caretaker’s turn came he would take two of us boys with him and I was sometimes one of the two. To us it was a lark. We loved to sit up most of the night, helping tend the fires and the syruping off, and we would boil down some of the syrup on our own account.

There was an annex to the main building, a combination of bedroom, kitchen, and parlor.  At one end of the room were double deck berths, as it was often necessary to boil the sap night as well as day. There was a good cook stove, a large dining table and plenty of chairs. Once again only did the boys spend the day at the camp, but this day was purely a holiday and we spent it in play and feasting on the sweets of which all the varieties were at our unlimited disposal.

The maples of this orchard were very large pasture trees. I have known two of them to yield a barrel of sap each in one day. Most of the trees were served with two, and some with three buckets. … The product of the sugar harvest differs greatly in the various seasons.  The least I ever knew from this orchid was 250 barrels. The greatest yield was nearly 700 barrels. The other Families had sugar camps of their own, totaling about the same as the Church Family. 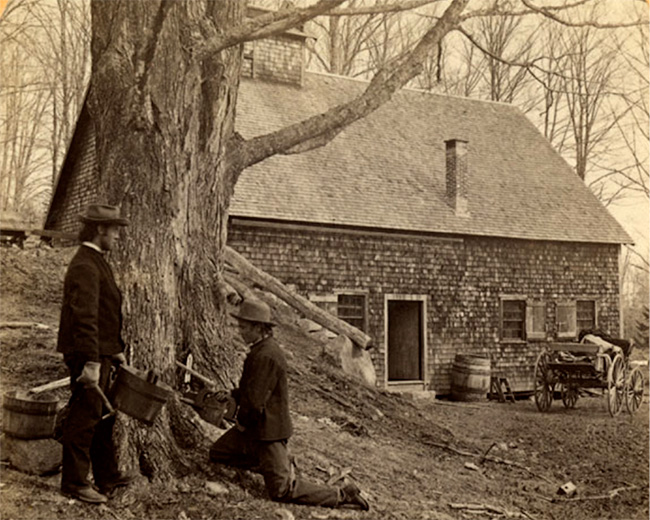 Nicholas Briggs and Brother William tap trees at sugar camp in 1878. There’s a boulder retaining wall on the gable end of building, which provided easy access to the upper level of the sugar house.

In 1894 Briggs left Canterbury Shaker Village and moved to Concord, abandoning the Shaker way of life, but in the 40 years that he participated in the spring ritual of making maple syrup at the Village, he left a rich written description of the sugar camp I had now found abandoned out in the woods.

Records indicate that the Shakers continued to use this sugar camp until about 1914, when their population had declined such that they no longer needed it nor had the manpower to maintain and operate it.  The buildings were dismantled and sold to a buyer who hauled them away to re-erect as a barn. The stone foundations remained and the forest grew in around them.

Archived photographs taken in 1878 show a strapping 36-year-old Briggs working at the sugar camp. In the background of the old photos, I can pick out constructed rock formations that can still be identified on the ground today.

My questions have been answered, but I still like to speculate about what might have gone on during those long March evenings at the Shaker sugarhouse.