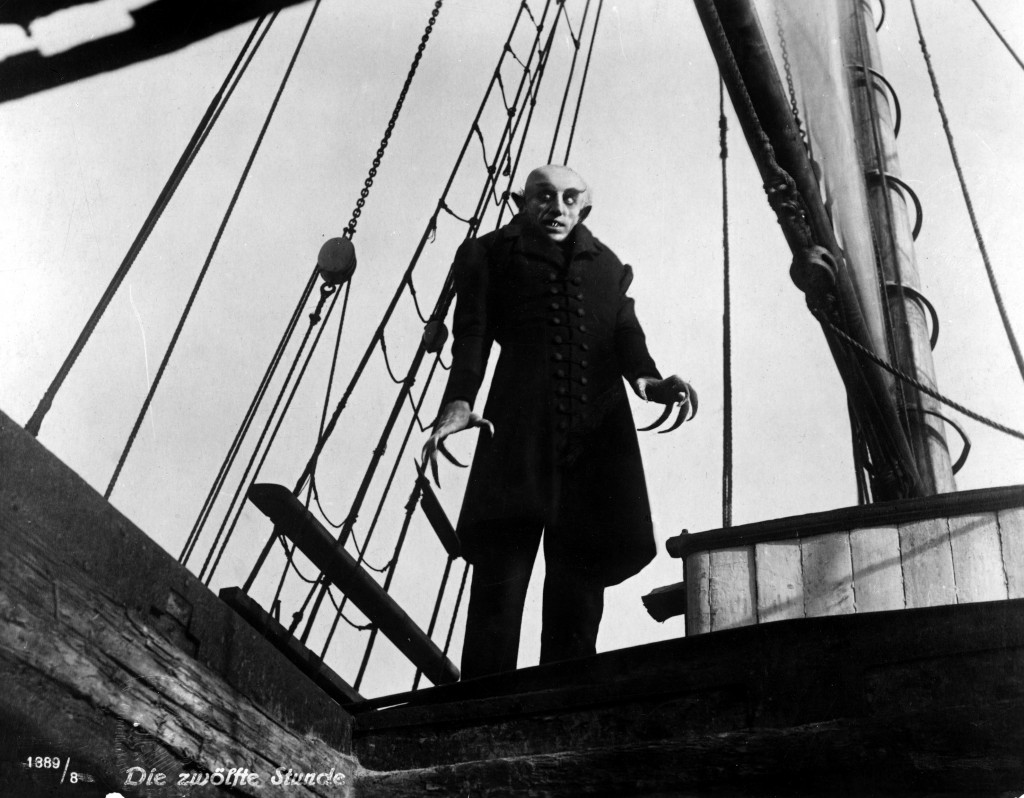 SILENTS ARE GOLDEN: Celebrate Halloween by experiencing “Nosferatu,” the original silent film adaptation of Bram Stoker’s famous “Dracula” story. Still scary after all these years — in fact, some critics believe this version is not only the best ever done, but has actually become creepier with the passage of time. See for yourself, if you dare. Sunday, October 25, 2 p.m.: “Nosferatu” (1922) directed by F.W. Murnau. Admission free, donations of $10 per person encouraged.

When Dennis Markaverich began managing the Wilton Town Hall Theatre in March of 1973, he opened with “Gone With the Wind.” It’s still one of his favorites, along with “Lawrence of Arabia” and “Doctor Zhivago.” Markaverich likes classic Hollywood epics that overwhelm by their sheer energy, and confesses that tears have been known to stream down his cheeks in the auditorium balcony, where he sits in the dark running the projector. He doubts that a plotless film watched in snippets on a tiny screen between social-media notifications can achieve the same effect.

The red brick Wilton Town Hall is an imposing example of American Queen Anne architecture built between 1883 and 1885. Unless you’re from Wilton, chances are you’ll come in the Main Street entrance, which is really the back door. The outside wall of this lower level consists of granite blocks quarried in neighboring Milford. Inside, past the town offices, you’ll be drawn up the long ash staircase by soft light and the smell of popcorn.

Like the stairs, the wood floor on the upper level creaks. Over a counter worn by the eager elbows of generations of moviegoers, hand-carved signs direct you into one of two lines: Tickets or Refreshments. The counter is lined with popcorn buckets in four sizes, and behind it are candy and drink offerings, notably the New England favorites Moxie and Polar seltzer. On a grooved letter board, you’ll find the ticket prices, which are low.

The auditorium ceiling boasts angled brackets, beams and a latticed arts and crafts-style central recess, all carved from rich, warm cherry wood. Since its inception, this grand 250-seat space has hosted lectures, temperance meetings, minstrel shows, basketball games, boxing matches and dances. If floors ever became too sticky to dance on in the old days, the problem was solved by sprinkling cornmeal on them. Moving pictures came to Wilton in 1912, and beginning in the 1930s, the auditorium served most often as a cinema. During World War II, it was the only place in the surrounding hill towns that played newsreels.

Buttery popcorn is all you’ll find on the floors nowadays. Markaverich sweeps out the rows between seats after each show. The theater, which he leases from the town, was open seven days a week, pre-pandemic. Even then on weeknights he’d usually work alone, and it was not unusual for him to project a film for an audience of five or six. Sometimes he’d stick around until the middle of the night because he likes the quiet of the empty theater. There’s plenty of quiet now as Hollywood holds its new releases for better days when the virus is under control. 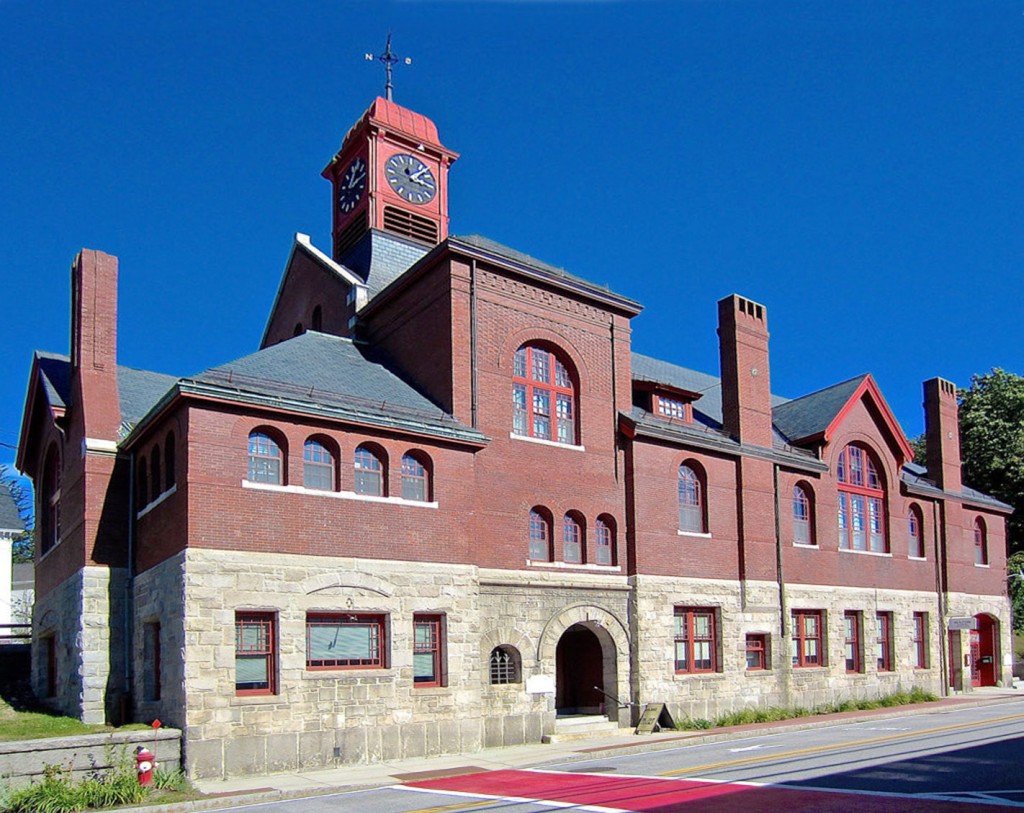 From a glance, you might not know the Wilton Town Hall is also home to a theater where film fans can catch international, independent and first-run Hollywood movies. Photo by Jim Rapsis

And while the silent-film age ended in the 1920s, in Wilton it persists. Markaverich screens one silent movie each month, and it always draws a crowd. In their heyday, silent films were not only voiceless but also without music. Scores were improvised live by local musicians, usually on pianos or organs, but in larger cities sometimes by whole orchestras. Wilton’s music man is Jeff Rapsis, who precedes each show with a lively talk setting the scene. Then he sits down at his organ to watch the film with the rest of the audience. As he watches, though, his fingers leap, sizzle and dash along the keyboard, articulating a lively three-way conversation between audience, celluloid and the muse. Rapsis, who lives in Bedford, accompanies about 100 film screenings a year across the country, but he considers Wilton home base.

Running an arthouse cinema isn’t easy anywhere. It’s especially challenging in a small town. “When people go to the movies, they do it to get out of town,” says Markaverich. “And the younger generation doesn’t really get a place like this. They’ve never even heard of Cary Grant or Bette Davis.” A local high school teacher brings his film class to a screening every year, but his students refuse to watch black-and-white movies and are uninterested in anything made before the 1990s. “At one time, all your visual treats were either in your imagination or at the movies,” Markaverich says. “Then along came television, and that changed the way movies were made. Nowadays there’s far more than just television competing for our attention.”Nevertheless, Markaverich has a loyale clientele, although he worries that most customers are older. “They come because it reminds them of when they were young.” He tells the story of an elderly World War II Navy veteran who once came to see “Destination Tokyo,” a 1943 submarine film. Afterward the man thanked him with tears in his eyes. On another occasion a woman approached him after “Top Hat,” a Fred Astaire and Ginger Rogers comedy. She had seen the film on her first date in the thirties. “I’m sure both of them have died,” Markaverich says.

Keeping a small-town movie theater afloat is expensive too. “The production companies don’t like us because we’re too small. Multiplexes with overpriced nachos make more money for them.” Compliance with safety and accessibility rules is also costly for a 19th-century building set in a hillside. Although a grandfather clause exempts the theater from ADA wheelchair-accessibility requirements, Markaverich is committed to making his cinema available to everyone, often relying on customers to lend a neighborly hand.

But there’s no exemption from providing ADA audiovisual accommodations, and Markaverich is raising money to bring in closed-captioning and audio-description devices as soon as possible. A dedicated collection jar sits on the concessions counter.

Wilton is one of the only places you’ll find foreign films in New Hampshire. A few months ago, the theatre played “Dolor y Gloria” (“Pain and Glory”) by Spanish director Pedro Almodóvar. The autobiographical opus is, among other things, an ode to an era when the movie house was a place where the cosmopolitan world and small-town life intersected. Like local cinemas everywhere, the Wilton Town Hall Theatre was once a place to learn the news and to socialize. It was a place for ordinary people living in a particular place to take in extraordinary stories, as a community. In Wilton, you can still feel some of this, although in the streaming age (in spite of what marketers may tell you) the deck is stacked against everything little, local and collective, an effect magnified by the onset of COVID-19.

Partway through “Gone with the Wind,” when the Confederate Army has been all but routed by Sherman’s troops, Rhett Butler decides to join the fight. Scarlett asks him why, of all times, he’s going now. His answer is one Markaverich might easily give: “Maybe it’s because I’ve always had a weakness for lost causes, once they’re really lost.”

Pain is the name of the game for the brave souls in the independent-cinema business today. But only until the lights go down. Then there’s that same old glory.

The Insider's Scoop: Jordan Tirrell-Wysocki on The Stone Church