Lahout’s looks at 100 years in Lincoln 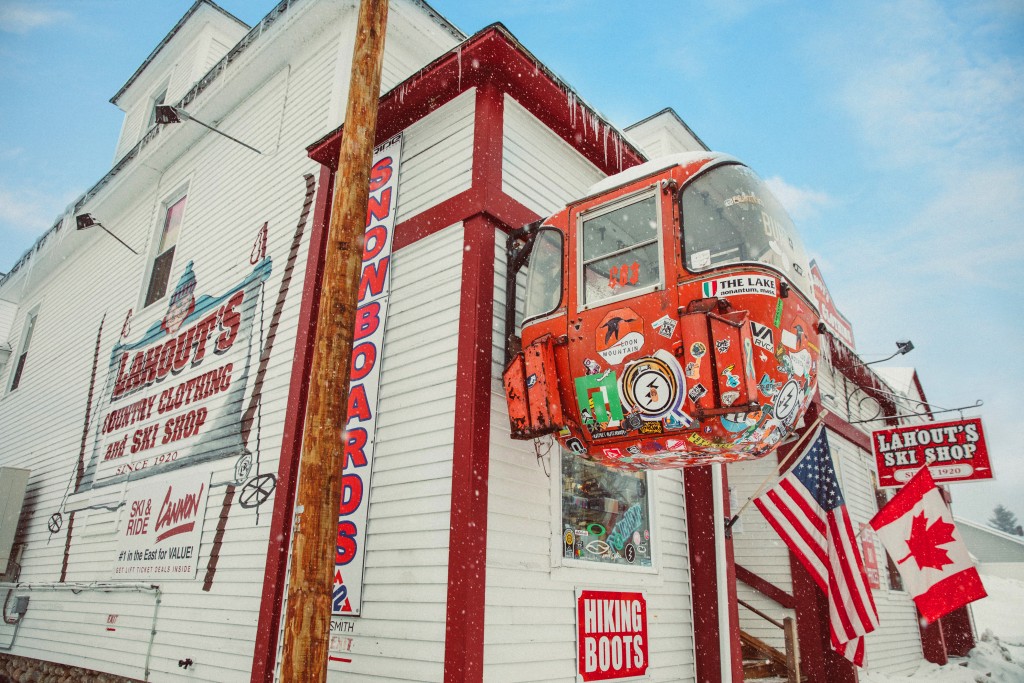 Lahout’s has expanded since the first shop opened in Littleton in 1920. One of eight locations, the shop on Main Street in Lincoln (pictured here) is a fixture of this ski town. Courtesy photo

It’s not fancy by any stretch of the imagination, but Lahout’s Country Clothing and Ski Shop, a two-story red structure with white trim that sits where Littleton’s Union and Pine Streets meet, is as much a part of the fabric of the North Country as any notch or mountain.

Truth be told, as America’s oldest ski shop — it first opened in 1920 — it feels more like a grandparent’s house, according to Anthony Lahout, co-owner and fourth generation family member to operate the shop. It’s an apt description, because, for the 32-year-old Lahout, it was his grandfather Joe’s home and workplace. With nooks and coves, random jogs and shelves, and walls loaded with memora-bilia, it feels, well, lived-in. And as producer of the short film “North Country,” which tells the story of his family’s business, Anthony has invited everyone in for a look around.

“This is the original location that is literally the same store, in the same location with the same front door and the same floors it’s had for 100 years,” Anthony says. “The trip of it all is, in the back of the store, that’s where my grandfather, the patriarch, was born. His family lived above the store and that’s where he raised his four kids — my three uncles and aunt. It’s puzzling, because my grandfather could’ve bought a home, but it was such a part of him and his family. Their house is the store, and the store is their house. It’s this interchangeable thing.”

The Lahout origin story, and the family’s connection to New Hampshire ski country, began in the late 1800s, when Herbert Lahout came to America from Lebanon. He and his wife began selling goods from a wagon and in the Littleton Grange Hall in 1920. Fifteen years later, in the midst of the Great Depression, Herbert died of appendicitis, leaving the business to his widow Anne and 12-year-old Joe.

Looking and feeling like an outsider, Joe grew up just as skiing took off in America. Flying down Remich Park at top speed showed others that he was just as good, if not better, than anyone else. Hannes Schneider arrived, the first aerial tramway was built at Cannon, the Ski-mobile lift at Cranmore began operation, and the Nansen Ski Jump began launching people into the sky over Berlin — all of which helped a pastime grow into a full-blown subculture. Then Joe, who had a deferment as the son of a widow, volunteered for service in World War II. When he came home, he got right back to where he left off with his mother and older sister Gladys. The film opens with Joe sitting in a comfortable chair, his large, gnarled hands gripping the armrest as he explains what he did upon his return to New Hampshire: “I put the god-damned skis on and did it.”

“My grandfather expanded when he got back from the war and converted the grocery store into a ski and outdoor shop,” Anthony says. “At the same time, people were making major adjustments to the retail environment, catering to the ski elitist demographic. My grandfather couldn’t afford that, so he said, ‘I’m going to make this as country as I can. As local as I can.’ It’s a philosophy we still strive to attain in 2021.” 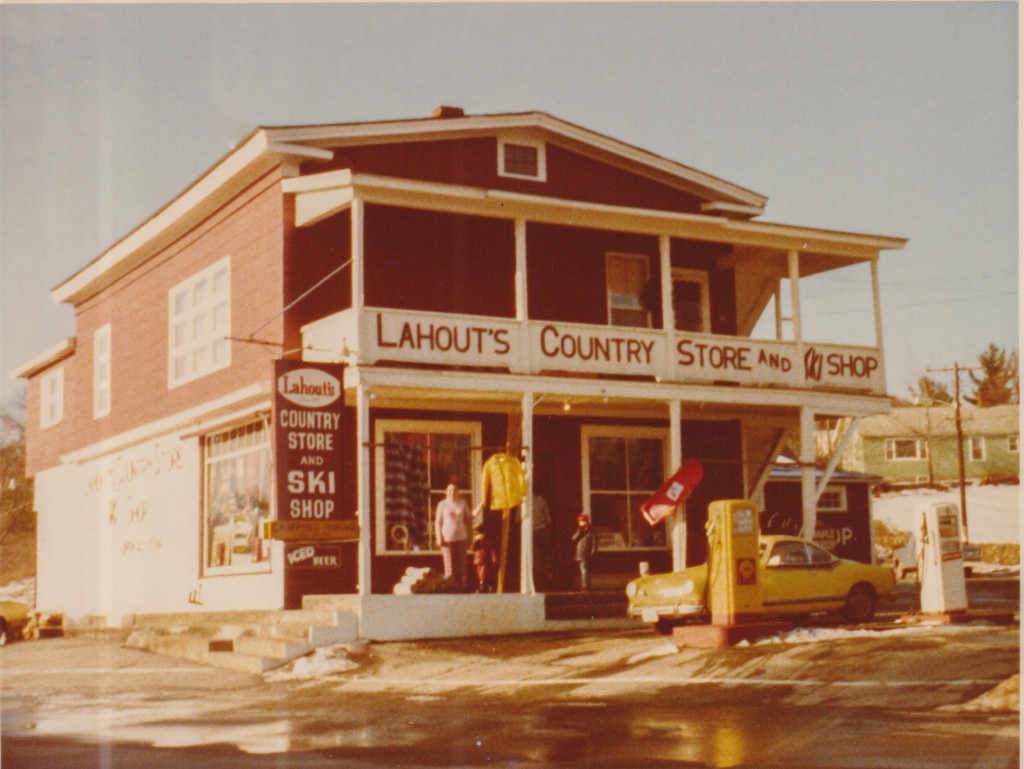 The original store in Littleton as it looked in 1974. Courtesy photo

Step inside and discover that the flooring is original — every creak and groan. Every collection, every memory and every piece of equipment stays. There are eight locations throughout ski country now, but the Littleton shop was first, and each maintains a unique and specific personality.

Like many young people, Anthony thought his future lay outside northern New Hampshire. He began work as a financial analyst, but found it less than fulfilling. He began skiing all over the West, but each trip back home began to reveal something unexpected.

“I did have that motivation to go out West and explore Colorado and California and all these great places with bigger mountains and more snow,” he says. “But coming home on different vacations and holidays, I was getting this nostalgic feeling every time. When you spend enough time out West, you realize you can always go back to the Rockies and you can always go back to the Sierras, but this place makes me feel very grounded. This area of New England, it’s not the only one but it’s the one very connected to me, it’s still one of those hidden gems that’s not overcrowded or overpriced. What drew me back was that feeling and the deep connection I had with my family. It was very natural.”

There are marketers who would pay handsomely for the authenticity that lives in every grain of wood, photograph, signed whiskey bottle and piece of ski equipment at Lahout’s. But it’s not something you can buy.

“When Nick Martini and Stept Studios shot the original short piece about my grandfather, I’d send still photos to photographers working for Outside Magazine or TGR [Teton Gravity Research] or The Boston Globe, and they’d ask what space I rented to shoot this or where I got the clothes. The reality is, that’s my grandfather in his bedroom. That’s my grandfather on his porch. None of it is staged.”

The shop’s Instagram page shows a picture of the outside of the shop taken in October of 1970. A look at the store now would reveal that very little, if anything, has changed.

“Not a lot of places like that exist,” Anthony says. “I saw my grandfather was getting older, and you can’t tell a story like that through just a photograph. I wanted to show my kids and grandkids who my grandfather was, who their family was, how they came to this country. It started out as a family heirloom, but it blew up out of nowhere.”

The 21-minute film tells the story of Joe Sr., the Lahout family and the shop, but it also touches on weightier themes: immigration, female empowerment and service to your country. And it packs a surprisingly emotional punch.

“It sheds a very truthful light on a sport, on an area and on a family,” Anthony says. “Warts and all. The North Country is the way it is because of the people, the weather, as brutal as it can be, and the strong-willed, hard-working, hardcore athletes and ski areas and snowboarders and rock climbers and hikers. It weeds a lot of people out.”

“North Country” has resonated with skiers and boarders, locals and critics alike, Anthony believes, because of its authenticity. “One of the goals of the film was to not paint a picture of us as a super-squeaky-clean, elitist ski family,” Anthony says. “We’re the opposite of that. We’re a very quirky, very loose and intense family.”

In the first few minutes of “North Country,” a curmudgeonly Joe Lahout is getting ready for the day, and Anthony arrives to help him exercise and stretch. It illustrates perfectly the relationship between grandfather and grandson, and what was becoming a passing of the torch in the family. 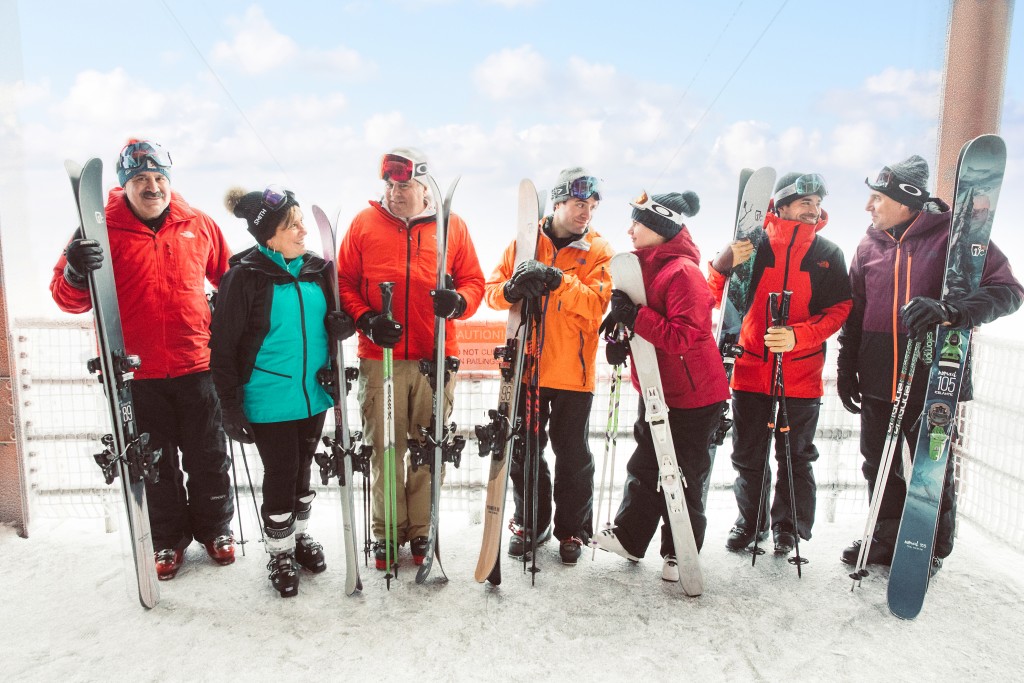 “We have an innate connection that involves skiing and involves how we’re wired in some ways,” Anthony says. “There are just moments that you have that are deeper than any moment that I’ve had probably with any other male figure.”

Joe Lahout died on his 94th birthday, June 17, 2016. Yet nearly five years later, he remains a tangible presence in the old shop. Anthony senses him behind the bench or at the register — where, when he wasn’t on the mountain, he spent most of his life.

“My grandfather was an outcast from an immigrant family, yet he was still able to make a deep connection with the community that will always be remembered,” Anthony says near the end of the film. “His mentors were strong women from another generation built on hard work, love and education. He cared about his family, the outdoors and the people in this community. When I came home, it was those same people who took me back in to the family and it really made me remember why this part of the country is so special.”

What happens next for the fourth generation Lahout? Working with his father, Joe Jr., his uncles, Ron and Herb, and other family members in the shops. But more immediately, and perhaps more importantly, to carry on Joe Lahout Sr.’s legacy and to live a lesson his grandfather taught him: “Put the god-damned skis on and go like hell.”

The Stept Studios film, “North Country,” directed by Nick Martini and produced by Anthony Lahout, is available on the Teton Gravity Research YouTube page and on Vimeo.