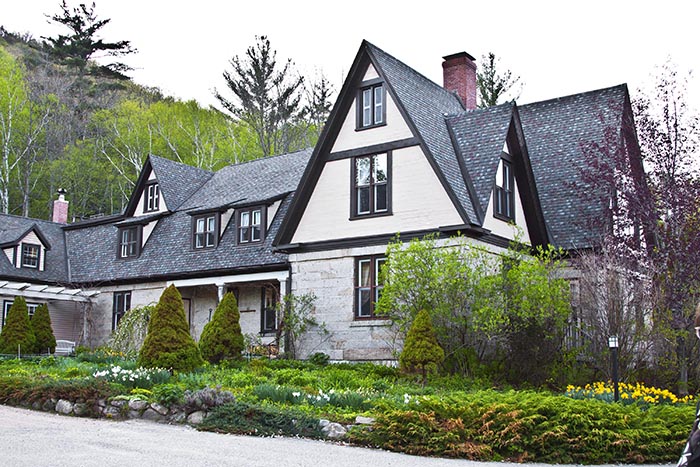 For the smallest town in New Hampshire, with a population of 43, Hart’s Location packs in a lot of appeal — and some powerful history. Events there were instrumental in establishing White Mountains tourism, and the town has a place in literature and political history as well. That’s before you even begin counting the reasons for going there today: spectacular scenery, hiking trails to waterfalls (including the state’s highest) and the road to a real ghost town. The frosting on the Hart’s Location cake is a lovely country inn with a memorable dining room — and a history of its own.

Native Americans had used a trail through the notch, but the first news of a viable passage across the mountains came from Timothy Nash. While hunting on Cherry Mountain, he noticed a gap in the line of mountains to the south. In 1771, he told Governor John Wentworth of his discovery. Wentworth said that, if Nash could get a horse through the notch, he would grant him the land at its top, where Nash must build a road. With friend Benjamin Sawyer, Nash got the horse through — sometimes lowered on ropes — and was granted the land. The road, although hardly a road by today’s standards, opened in 1775.

The first settlement came in 1793 when Abel Crawford built a home at the southern end of notch, followed by his father-in-law; both offered lodging to travelers. With the opening of the Tenth New Hampshire Turnpike through the notch in 1806, this became a busy route, with farmers hauling goods to Portland and returning to northern New Hampshire and Vermont with provisions. By 1830, it was an important stagecoach route; tourism had begun to play a role in 1819 when Abel’s son, Ethan Allen Crawford, built the first trail up Mt. Washington (still in use today) and started guiding climbers to the summit. In 1828, Ethan and Abel built the notch’s third hotel.

Tourism, although now assumed, was still in its infancy and consisted mainly of climbers and adventurers until a disaster thrust Crawford Notch and the White Mountains into the national news. In the unusually dry summer of 1826, the drought ended suddenly on the morning of August 28 with a torrential downpour. The parched ground of the mountainside above the cabin where the Willey family lived could not absorb the water fast enough, so it came rushing down, uprooting trees and dislodging rocks in a landslide. The entire Willey family perished when they left their cabin to seek more secure shelter. One daughter escaped only to be carried away by the flooding river. Ironically, a boulder behind the cabin diverted the landslide and the house was unharmed.

The story was a national sensation. Newspapers sent reporters and artists, whose accounts and images (often somewhat exaggerated) of the White Mountains brought their rugged beauty to nationwide attention. Curiosity seekers wanted to visit the site of the tragedy; Nathaniel Hawthorne used it as the inspiration for his story “The Ambitious Guest,” and Crawford Notch became a household name across the nation. Almost overnight the White Mountains became a tourist destination. In the golden era of the White Mountains grand hotels, a ride to the Willey House site was de rigueur for hotel guests, and it’s still a popular tourist stop.

A footnote to the story came 185 years later, on the exact same day — August 28 — when Hurricane Irene dropped 10 inches of rain in the mountains in a few hours. Swollen rivers again raged through the notch, washing out Sawyer River Bridge and sections of Route 302 near the Notchland Inn.

That landmark mansion, built of granite quarried on the property, was once the home of Dr. Samuel Bemis, who also owned much of Hart’s Location. Bemis had vacationed in the Crawfords’ hotels before completing his home here in 1870. He was a generous and public-spirited man; when the Portland and Ogdensburg Railroad wanted to build through Crawford Notch, he sold them the land for $1 an acre. It was Bemis who named the famous cliffs for his friend, artist Godfrey Frankenstein.

Building the railroad was no easy task. The terrain was formidable, with steep mountainside, deep gorges, the sheer 2,555-foot Frankenstein Cliff and a climb of more than 1,600 feet in 30 miles. Bridging the cliff was the greatest challenge, but a 520-foot steel trestle was devised to carry the tracks 85 feet above the ravine. The first train crossed it on June 29, 1875, and on August 9, regular passenger and freight service began between Portland and Bretton Woods. A new trestle replaced it in 1892, and is now an exciting highlight of the Conway Scenic Railroad’s Notch Train excursions.

The railroad opened up the White Mountains to tourism, making possible the grand hotels, guests at Fabyan House, Mount Pleasant House and the later Mount Washington Hotel arrived by trainloads for the summer.

Tourism was not the only commercial endeavor in Crawford Notch. Logging was a major industry all over the North Country, with its own railroads and company-owned towns. One of these was on the Sawyer River just over the town line in the now uninhabited town of Livermore. Follow Sawyer River Road on foot from Route 302 to see its remains: foundations, a brick chimney, an abandoned bank safe in the cellar hole of the store. The town, which once has a population of 200, died in the 1930s after its sawmill burned.

It was logging that led to half of Hart’s Location becoming Crawford Notch State Park. In 1912, the Legislature authorized the purchase of nearly 6,000 acres to prevent its being stripped for timber. Almost everything you can see driving through the notch — except for the view of Mt. Washington — is in the park.

The walk to Livermore is almost flat as it follows Sawyer Brook to the abandoned town; not so the other trails on which hikers can explore the notch. The easiest one climbs about 900 feet in its half-mile length to Arethusa Falls, a bit steeper if you take the Bemis Brook side trail to two smaller waterfalls. Arethusa is especially beautiful after a rain or in the spring, but even without a lot of water, the 175-foot height is impressive and the highest in the state. At the foot of the falls, another trail leads more steeply to Ripley Falls and the Frankenstein Cliff.

Dr. Bemis’ mansion, now Notchland Inn, preserves the original fine architectural and decorative details. These include a front parlor designed by Gustav Stickley, one of the founders of the Arts and Crafts style that influenced design in the late 19th and early 20th century. Individually decorated rooms show off the fine woodwork and unique features. The dining room is open to non-guests with reservations, serving dishes such as ravioli filled with spinach and pine nuts, and lamb kabobs skewered on grapevines.

The inn was the focus of press attention every four years as the scene of the nation’s first presidential election returns; New Hampshire law allows towns of fewer than 100 to open the polls at midnight and close them when all have voted. Thus, Hart’s Location and the similarly tiny Dixville Notch are able to report presidential vote tallies before any place else, giving newscasters something to talk about all day before there is anything else to report. The inn hosted its last election in 2008 — Hart’s Location still votes at midnight, but in the former Appalachian Mountain Club building, which is now the Town Hall.