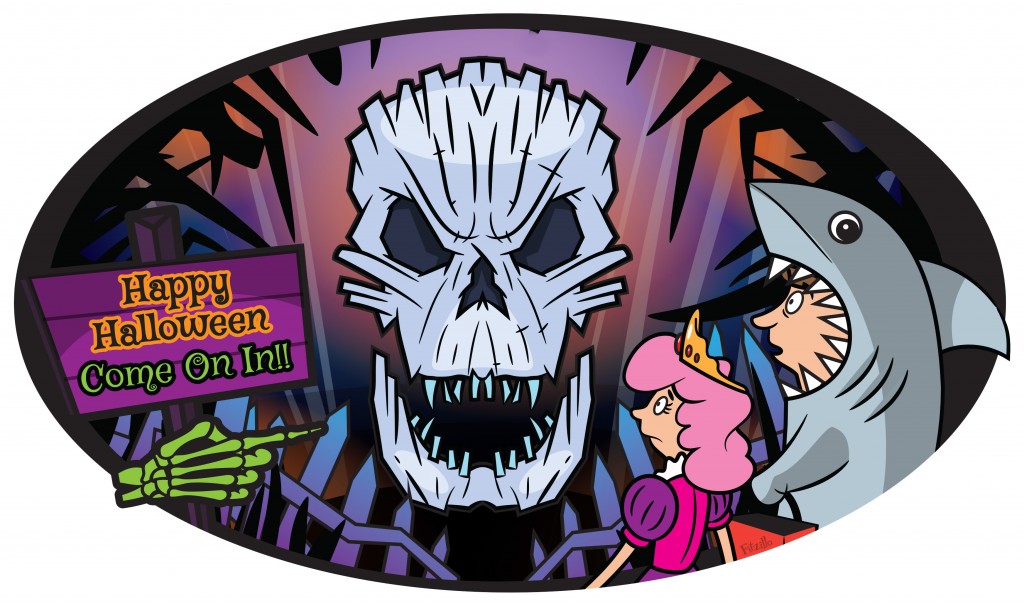 By day, DeMeritt Hill is a picturesque PYO farm in Lee. Depending on the season, visitors may pick peaches, pumpkins or apples — Gravensteins, Macs and blushing Granny Smiths. It’s a dream.

By night, however, in October, the woods beside the orchard turn from pastoral paradise to nightmare. Fiery eyes burn in heads as wide as barn doors and as tall as trees. House-size spiders bare glowing teeth.

Remember Pumpkinhead? He’s here. On steroids. As are ax murderers, zombies, demonic babies and big-head guys in overalls with blank looks (they have no eyes!). These creatures spring from the shadows, hang from the rafters, puddle on the ground.

It’s Haunted Overload, named one of the scariest attractions in the USA by USA Today. Most years my husband and I, my daughter and her husband, and sometimes Uncle Jim pay good money to walk these jack-o’-lantern trails and get scared silly.

Why do people enjoy getting scared silly?

Why do we enjoy scaring the pants off each other?

In East Northwood (where I live), a house on Route 4 sports a gruesome Halloween tableau that grows bigger and gruesomer every year. It’s a pretend graveyard complete with ghosts and witches. It lights up at night. People slow down to admire it.

Northwood, like most towns, has many real cemeteries — six public and more than 50 private. You can buy your own plot in Pine Grove for $100 ($200 with perpetual care). For anyone with a lively imagination, real cemeteries are plenty scary, way scarier than the ghoulish display on Route 4, maybe even scarier than Haunted Overload. Especially in the fall shrouded in leaves. Especially at night.

Nolan told how he and his friend, Pret, were walking home after a Halloween party with a group of bigger boys. It was dark, cold, spittin’ snow. Their path took them past a cemetery with a stone vault, also known as a receiving tomb. As they walked, the older boys dared each other:

—When we get theyah, let’s go in the vault.

As the big boys argued, Nolan and Pret slipped from the back of the pack and took a short cut through the woods. They beat the big boys to the cemetery by a hair and scaled the slanted back wall of the vault. At the top they found a small vent pipe and waited.

They could hear the older boys coming down the road. Nolan and Pret stayed quiet. The group congregated at the iron gate.

Whispering, giggling, until one brave lad creaked the gate open, walked up to the vault, and knocked on the heavy door.

Nolan spoke into the vent pipe in his deepest voice: “I’ll be right with you.”

Yup, under the right conditions a real cemetery will flood your system with adrenaline (when you think you’re gonna die) and endorphins (when you realize you ain’t). Did those big boys scream? You betcha. Did they run? Heck, yes.

No wonder the subject of cemeteries comes up in conversation so often — even when it’s not Halloween. Sooner or later, we’ll all end up behind that creaky iron gate. Or in a jar on the mantel.

One New Hampshire native transplanted to Jasper, Georgia, got a call from Jasper town hall asking if she’d like to buy a plot in a new cemetery.

“No,” she said, “I would not! I already have a plot in Jaffrey, New Hampshire, and I can’t wait to get back to it.”

One final word of wisdom: As the town clerk told the fella who inquired about buying a plot in yet another New Hampshire town, “I can tell you this, Mister. You can’t just come in cold.”