How will 2019 shape Democrats and Republicans? 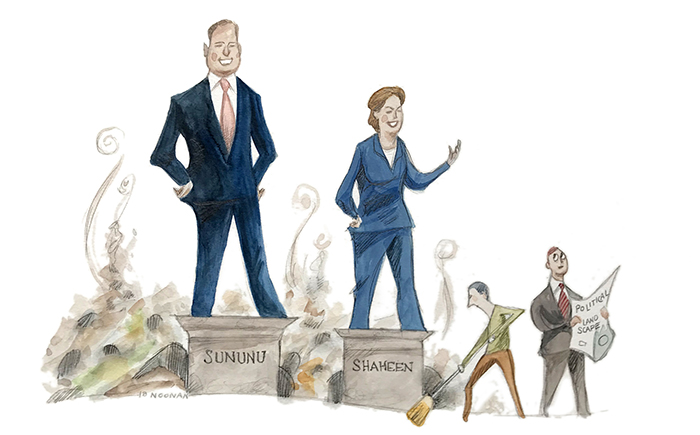 This could be a historic year when it comes to defining national politics. A divided government in Washington will mean investigations of the Trump administration, and special prosecutor Robert Mueller should wrap up his work in the next year — and it’s all taking place against the backdrop of a presidential election cycle. Here in the Granite State, possibly two dozen Democratic candidates will make an argument as to where the nation and the leaderless Democratic Party should go from here.

So, how could 2019 could shape New Hampshire politics? With many big-picture questions coming to a head, here are a few of the major storylines that will play out this year:

As Shaheen ponders her re-election bid in 2020, there’s the question of whether she wants to move forward or retire on top. The state’s senior senator will already go down in history as the first woman in the nation to serve as both a governor and a US senator.

As she seeks reelection to a third term, Shaheen will be 73. It’s unclear what big idea she would pursue with another six years, and it’s also unclear if any big idea would go anywhere in Washington, which cannot seem to pass anything.

Were she to announce her retirement, it would be a major moment. Shaheen’s exit could result in the return of Republican Kelly Ayotte, and could set forth a huge political musical chairs moment as people already holding office run for the Senate and vacate current jobs.

Can the NHGOP make itself “Great Again”?

In 2018, the appointed GOP chairman left a few months before the election because she got another job. The state party lost the House and Senate majority in the 2018 election, as well as two of the five seats on the Executive Council. They also lost both Congressional races.

What’s amazing is how little blame has gone to Gov. Sununu for this. Both of his parents served as NHGOP chairs. He rejected the incoming NHGOP chair when he took office, naming his own chair instead. As de facto head of their state party, he had the right to make this power play, but he never did anything significant to help the party after that.

This one is on him. Being the fourth most popular governor in America and the most powerful Republican in the state by far, he has a chance to make the party whatever he wants it to be. If he cares.

Can the left be kept at bay by the Democratic establishment?

In 2018, the Democratic establishment struck back against a fervent party base that picked Bernie Sanders for president by 22 percent over Hillary Clinton just two years before. Need proof? The establishment-backed Molly Kelly and Chris Pappas won the two most high-profile primaries. Then establishment pals Donna Soucy and Steve Shurtleff were selected to serve as senate president and house speaker respectively (though many, including those in the establishment, say luck had a lot to do with that outcome).

As the Democratic presidential primary gets underway, there will new renewed energy involving how to remake the party. This is will be a huge conversation to watch locally.