After the midterms, a flood of presidential candidates will take aim at New Hampshire 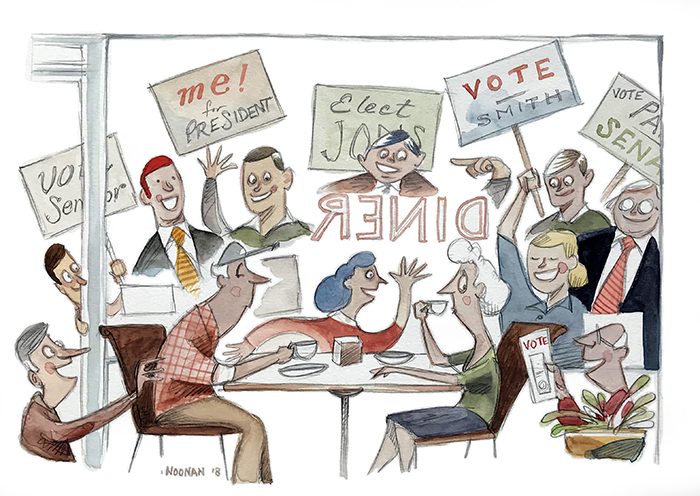 On November 6, voters all over America will head to the polls, capping off a midterm election that could be historic in many ways, but also capping off two of some of the wildest years in American history. Then, on November 7, the 2020 presidential race begins in New Hampshire. It could be equally historic and wild, but one thing that is almost certain to be true about the next presidential primary season: It will be full.

This is no joke. Already there have been visits to New Hampshire by 20 potential candidates, and this is with many of the big names — like Massachusetts senator Elizabeth Warren — basically staying away.

One reason for this is that, after nearly 30 years, the Clintons are out of the game, meaning there is no one powerfully directing from behind the scenes to help one candidate or give the boot to others. What’s left is a free-for-all at a time when the Democrats face major questions about which direction to take.

In the 2016 presidential primary, major party fissures revealed themselves. On the Republican side, Donald Trump was able to take advantage of a populist conservative uprising against the Bushes, Scott Walker and senators who all represented the GOP establishment. On the Democratic side, Vermont senator Bernie Sanders wound up running against a Democratic party that he saw as too corporate and rigged in favor of Hillary Clinton.

When Trump won, it ended the debate on what a Republican looked like. A Republican was a Trump Republican. The Democrats, meanwhile, never quite worked that out. That is what the next presidential primary season might accomplish.

This New Hampshire primary campaign promises to be different than any before it. It should be more diverse — with more women, more people of color and more people of different sexual orientations. There might even be more mayors running — and no mayor has been elected to the White House since Grover Cleveland, the former Buffalo mayor, was elected in 1886.

With the sheer amount of money in modern politics and the large number of candidates, there could be well over 1,500 campaign operatives running around the state working for either a campaign or a super PAC. If the Democratic presidential primary draws 250,000 voters, these operatives alone could determine the small margins between, say, 5th and 6th place.

These young workers will be running phone banks and renting apartments and buying a lot of pizza. And visiting your diner.

The next year could be an amazing time to experience politics in the state. It could also be really annoying. But if no one at the diner refills your water fast enough, there might be someone standing by who will be happy to help — if you are willing to listen to their plans for America.