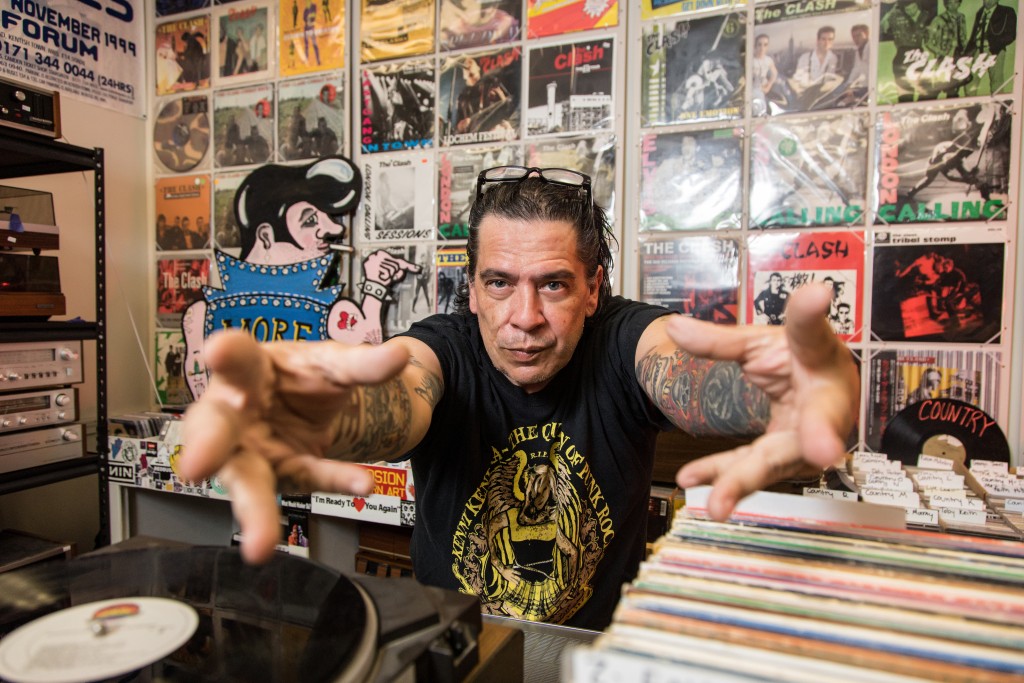 Todd Radict, the owner of Skele-Tone in Rochester. Photo by Kendal J. Bush

Used record stores have a smell. It’s a musty but comforting bouquet with subtle notes of nostalgia and your parents’ basement.

“I hear people say that all the time,” says Todd Radict, the owner of Skele-Tone in Rochester. “It’s because when CDs came in, it sort of forced people to get rid of their records. I never fell for it.” 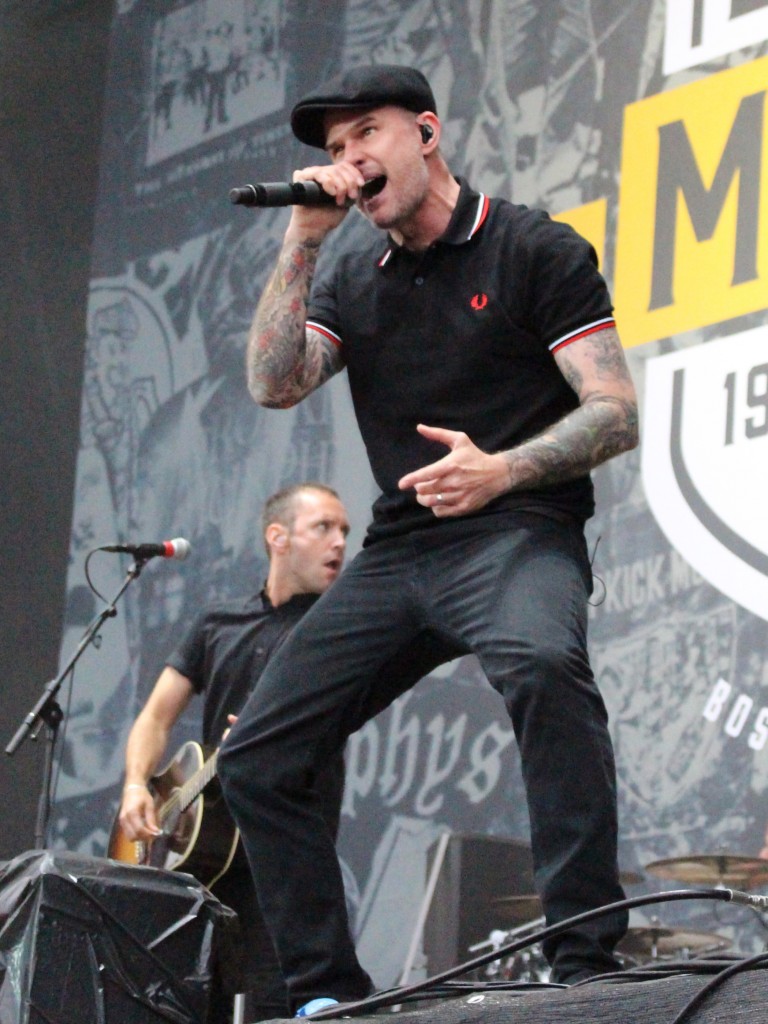 Al Barr, lead singer, Dropkick Murphys – “The first record I purchased was ‘Burning Love’ by Elvis Presley. I purchased it from Rock Bottom Records — shout out to Kevin Guyer! “One of my most treasured records is ‘Three Hits From Hell’ by the Misfits. I wish I had never given away my OG copy of Social Distortion’s ‘Another State of Mind’ single.” Photo by Wikimedia Commons

Nostalgia has certainly played a role in getting people back into the stacks, but make no mistake — they are back. In the past year, despite pandemic-related closures and slower foot traffic, vinyl record sales skyrocketed 29% to $626 million, according to the Recording Industry Association of America. Vinyl sales have surpassed CD sales in revenue. (Insert sound of record scratch here.)

“I’ve seen a huge increase in interest over the last six years, and it’s just getting bigger and bigger,” says Michael Cohen, owner of Pitchfork Records in Concord. “If you asked me 10 years ago, I would’ve said you were nuts — vinyl is not coming back. But obviously, it has.”

Yet the $1.1 billion in CD and record sales combined can’t touch digital downloads. In fact, nothing can, which is one of the drawbacks of the convenient but intangible format.“I think people want to own a physical piece,” says Cohen. “And I think many people find that vinyl offers a different, softer, more pleasing sound. But it’s more about owning something instead of a digital download. It’s about having something in your possession.”

John Benedict, owner of Music Connection in Manchester, says the visuals have also brought younger people back into the stores. When someone is used to looking at a small graphic on their phone, the larger album cover art is a remarkable upgrade.

“It gets them off their devices,” he says. “They’re on a different device, and it does one thing — it plays records.” 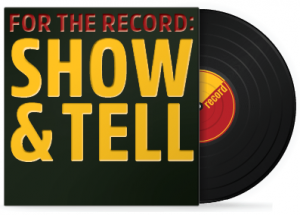 Tell us: What was your first record or the album that changed your life?

Upload a picture with your favorite album (if you still have it) or tell us the story of your most beloved vinyl. The best story could get the lucky winner a $50 GIFT CARD to an independent
New Hampshire record store.

Submit your story and photo here.

Benedict says that, while Boomers and Xers may have once owned many hundreds of records, younger fans will now limit their collections and focus on music they specifically connect with. Benedict says teenagers are still drawn to classics like “Abbey Road” and Fleetwood Mac’s “Rumours.” It’s all about connecting with the artist, he says.

“That was the thing about record albums — we treated them as an experience,” says radio personality and host of “Greg and the Morning Buzz,” Greg Kretschmar. “We listened to them start to finish. It took you on a kind of journey every time you listened to it.”

As Skele-Tone’s owner, Radict is a firm believer in that experience, and the magic of a record shop. Before he hung out his shingle on North Main Street a little more than 10 years ago, he was earning his bona fides in the clubs of New York City as a member of the influential punk band The Radicts. When he wasn’t on stage, he worked at legendary scene spots like CBGB’s and Trash and Vaudeville, where he met his heroes — Prince, Slash, Iggy Pop, Ace Frehley and Deborah Harry, among many others. It’s also where he amassed a collection of music memorabilia that lends a particular authenticity to Skele-Tone, which, in addition to being the largest collection of vinyl in New Hampshire, is also part clothing store and part museum.

It’s an easy enough place to find — look for the pink storefront. Or follow your nose. That aroma may be just cardboard and PVC plus time, but it could also be the funk coming out of the grooves.

“You can smell that vintage vinyl,” says Radict. “They’ve been stored in basements or attics, and you can smell it.” 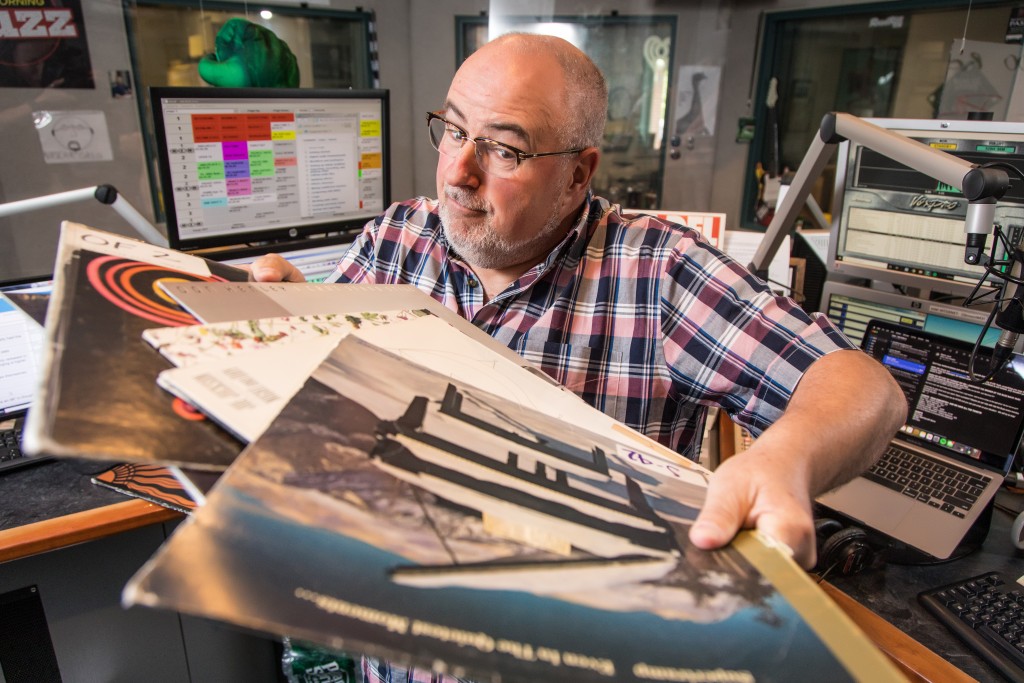 Greg Kretschmar, radio personality, host of “Greg and the Morning Buzz” – “The first record I ever bought with my own money was Elton John’s ‘Don’t Shoot Me I’m Only The Piano Player.’ I paid $4.99 for it at a store called Giants in Dover, and I remember it like it was yesterday. I couldn’t wait to get home and drop the needle on it and play it from start to finish, which I did repeatedly for hours. And for the record, even though I took that first journey back in 1973, I still do it today with that album. I listened to it start to finish barely a week ago, and it’s just as good today.” Photo by Kendal J. Bush

Souvenirs, collectibles and showpieces cover nearly every available surface in Radict’s shop. There are artifacts from Sid Vicious and the Ramones, a pair of pants Stiv Bators wore during a gig, a denim jacket signed by Joe Strummer of The Clash. Wander over to the other half of the shop and discover a snare head signed by Lemmy Kilmister, a number of items signed by members of Kiss, a T-shirt signed by the members of X, and the handwritten setlist of Sham 69’s final show at CBGB. But it’s all just dressing around the rows of records that line the walls and run through the middle of the bisected, long, thin space.

“When you go into a mom-and-pop store, you can talk to the owner and they’re knowledgeable,” says Radict. “You can sit back and have conversations. I always encourage my employees to talk to customers because everyone’s got a story. If you go into Walmart, you don’t get that. They don’t have the knowledge. We treat our customers like family. We’re not there just to make money. We love introducing people to new music. We want you to feel welcome.”

There are quite a few gems tucked into the stacks, including an incredibly rare “Best-Of” Kiss record that was only available as a special order from Japan, and the scarce “butcher” version of the Beatles’ “Yesterday and Today.” But it’s not just speculators digging for an investment piece or Gen-Xers looking to recapture their youth by reclaiming a long-lost copy of “The Wall.”

“It’s everybody,” says Radict. “We get 12-year-olds and younger — kids that will come in for Disney records, and we’ll have people all the way up to 80 years old. We cater to anybody.”

Even beginners — for whom Radict has some advice: Look for equipment from the mid-’70s to the mid-’80s — the silver face receivers from companies like Pioneer, Marantz, Toshiba, Kenwood and Realistic. Next, keep your fingers off the vinyl itself, store your albums vertically and keep them out of the sun. Finally, keep an open mind and listen to everything.

“That’s the best thing about music,” says Radict. “You’ll never hear it all.” 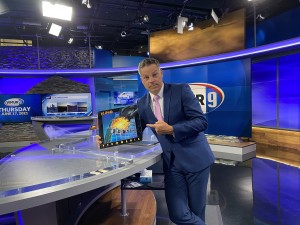 Sean McDonald, WMUR anchor and host of “New Hampshire Chronicle” “It was a pretty big deal at the time and I may date myself, but my first record was Def Leppard’s ‘Pyromania.’ I was really into Def Leppard … and ‘Rock of Ages’ was pretty much every other song on the radio. I really liked that, I really wanted it, my birthday was coming up, and my older sister surprised me with that. And a side note: We did have a real record player, but the needle was always broken because we abused it. But we had a Fisher Price record player, which was indestructible. And I did play Def Leppard on that Fisher Price record player.” 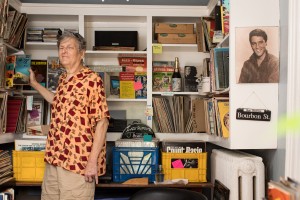 Bruce Pingree, WUNH radio host for 49 years “My first record was ‘Something New’ by the Beatles. It was kind of a compilation record. My brother and I picked it up at French’s Music in Concord. They sold records and instruments, and since I grew up in Concord, that’s where we went. “There’s one record in particular, though — in the early ’80s I was doing a show at The Riverside Club in Portsmouth. There was a woman who went by the name of Cristina who was doing dancy/new wave stuff. One record she cut was her version of ‘Is That All There Is?’ which was a big hit for Peggy Lee. Well, Peggy Lee’s people sued her for doing that, so it never officially came out. But the 12-inch single was sent to me. It’s definitely one of those pieces where I’m only one of a handful of folks who actually saw it.”
Categories: Music & Movies, People