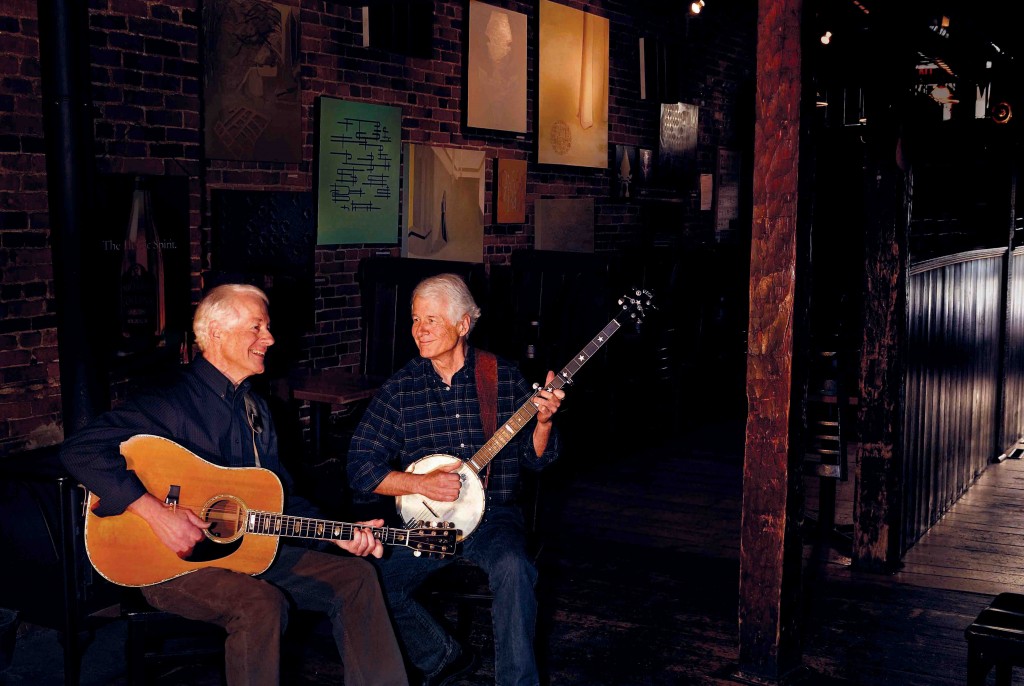 The Music Is Magic fund, which was established in memory of beloved New Hampshire musicians, the Shaw Brothers, provides free music and entertainment at the Edgewood Centre in Portsmouth. Photo by P.T. Sullivan

For decades, Charlie Dawson entertained passengers sailing on the Royal Caribbean Cruise Line, and throughout his celebrated career he’s performed for appreciative audiences in a variety of other well-known venues at locations far and wide. Nevertheless, his current work with the Music Is Magic Fund is his greatest gig of all.

“I’ve been an entertainer all of my life, but after I started playing for seniors, I found I really liked it. This is the best job I’ve ever had. This is fantastic. I really love this work,” says the 74-year-old musician, singer and songwriter.

The Music Is Magic fund is a nonprofit organization established to honor the memory of Ron and Rick Shaw, the identical twins better known as the Shaw Brothers, while bringing the healing power of music to people in a congregate living facility. Ron and Rick Shaw, with their blended bari-tone voices, were singers, storytellers, poets composers and balladeers, and they became a New Hampshire and New England institution. As the liner notes on one of their CDs extols, they were loved by audiences of all ages and all walks of life: white collar, blue collar and no collar.

During the 22 consecutive summers the brothers headlined Portsmouth’s Prescott Park Festival, their universally popular concerts — which were a mix original work, traditional folk classics and contemporary music — attracted crowds like no other act could, typically drawing more than 10,000 to the waterfront landmark.

The anthem “New Hampshire Naturally,” with music and lyrics by the Shaw Brothers, was adopted as an honorary state song by the Legislature in 1983. Throughout their long careers starting as undergraduates at UNH, Rick and Ron Shaw made people happy with their music and inspired people to sing along.

Sallie Macintosh was Ron Shaw’s significant other for 30 years, and with limitless energy and a wealth of ideas, she is the driving force of Music Is Magic.

“Rick was living with Ron and me, but by January 2017, Rick’s Alzheimer’s disease had progressed to the point that he needed to go live at The Edgewood,” says Macintosh. “Colleagues and old friends of Rick and Ron started to visit him there and make music for him, and this became the ‘Song Circles,’ which we then happily opened to any resident to enjoy. It was like a party, and we all enjoyed the music,” she adds.

“Sadly, in March of 2018, Ron’s cancer also progressed and then he was admitted to Edgewood. For the last eight days of his life, he and Rick were able to be together again,” she says. “A day or two before Ron died on April 1, 2018, I came up with the idea of the Music Is Magic Fund to help people be reached through music. I wanted to make sure that the entertainers were paid something. I told Ron about it and he was very supportive.” Macintosh adds, “Ron always said that music is magic.”

Macintosh explains that she and Rick had been listening to the old Shaw Brothers tapes and music was the way to reach him. “It was astonishing. He lit up. He came to life,” she says. “It’s a fact that one of the only activities that activates, stimulates and uses the entire brain is music. Establishing Music Is Magic so that entertainers could come and perform for others gave Rick a purpose. In the moment, he recognized what we were doing.”

Ali Nesman, The Edgewood’s life enrichment specialist, understood the power of the music as well and came immediately on board to lend her considerable talents. Many of the Shaw Brothers’ renowned fellow musicians, like Dawson, Brian Corcoran and Bill Staines, among others, began performing there regularly, and the all-volunteer Song Circles became monthly events the residents and staff looked forward to. 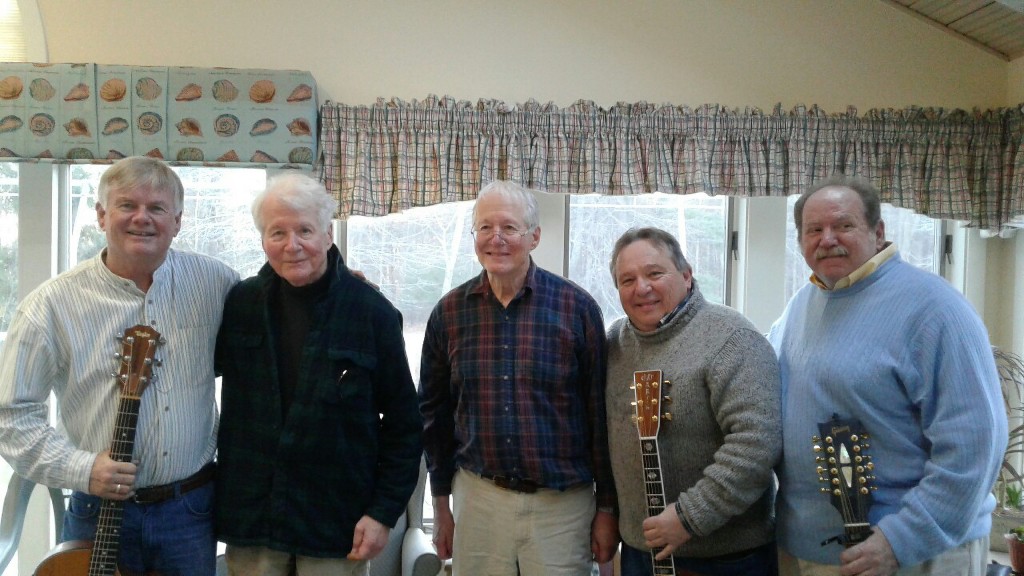 “I’ve worked with Ali and she’s absolutely wonderful. She’s the boots on the ground,” says Macintosh. “They have a budget and are limited in what they can do, but because we’re an adjunct, we can do the extra they can’t afford. We’re the cherry on the cake,” she adds.

By the beginning of 2020, the program was so successful that they were planning an entire year ahead, and everyone was excited about all the programs in addition to some summer fundraisers. Then the pandemic hit. The Edgewood, like all other congregate living groups, went into lockdown for the rest of the year and into 2021 until the Covid-19 vaccine became available.

“My background is technical,” Dawson says. “When Covid came, I was able to turn my home recording studio into a streaming video studio and started doing my shows for them on Zoom and livestreams. They really liked it when I put my shows on tape. I donated a lot of my work to the Music Is Magic Fund. Ali from Edgewood was the first to jump up and say we can make this work. She had the technical know-how and the will to make it happen,” he adds.

During Covid, the demand for Dawson’s shows grew, and he agreed to do a show every Monday. “We put together a Zoom every week, and the videos worked very well. But the Music Is Magic Fund is the key,” says Dawson, who donated much of his time and effort. “Believe me when I tell you, this is work — hard work. There is a large cash outlay and there is a lot involved to make it really good quality.”

The Shaw Brothers had always wanted to produce a special CD of Christmas songs, but somehow never got around to it. Macintosh says, with the help of Dawson and others, they were able to produce one from old tapes of the brothers’ recordings. It was released with an initial run of 300 and half of them sold quickly. It continues to be a successful fundraiser for the project.

“Every penny of each one sold goes to Music Is Magic,” Macintosh says. CDs are available at shawbrothersmusicmagic.com.

Though the project was able to stage some live outdoor concerts from June through October in the courtyard at The Edgewood, once the cold weather returned, all the performances would have to go back to virtual.

“I have many offers to go back out and work, but songs for seniors is what I do now,” says Dawson. “I was the only one who performed consistently all last year, and I’ll
keep doing it and continue to give them my time. Maybe this year I can bring some guests into my studio for the shows,” he adds. “Music Is Magic is a wonderful thing for what it is doing for the seniors. I can tell you that there is nothing like live music for them. It reaches them in a way nothing else can. It absolutely took me off my feet. What I’m doing is important.”

No one knows that better than Macintosh, who is the keeper of the Shaw Brothers flame.

“This is done in Rick and Ron’s name. They made so many people so happy, to be able to do this means the world to me,” says Macintosh, who sadly lost Rick on January 28. “It is such a saving grace for me. This is part of why I say that Music Is Magic benefits me more than anyone else. To be able to be part of something positive that gives people joy like Rick and Ron always did gives me purpose and we all need that.”