They say things sometimes slow down during a traumatic event, and that clearly was the case for me on this ill-fated evening. 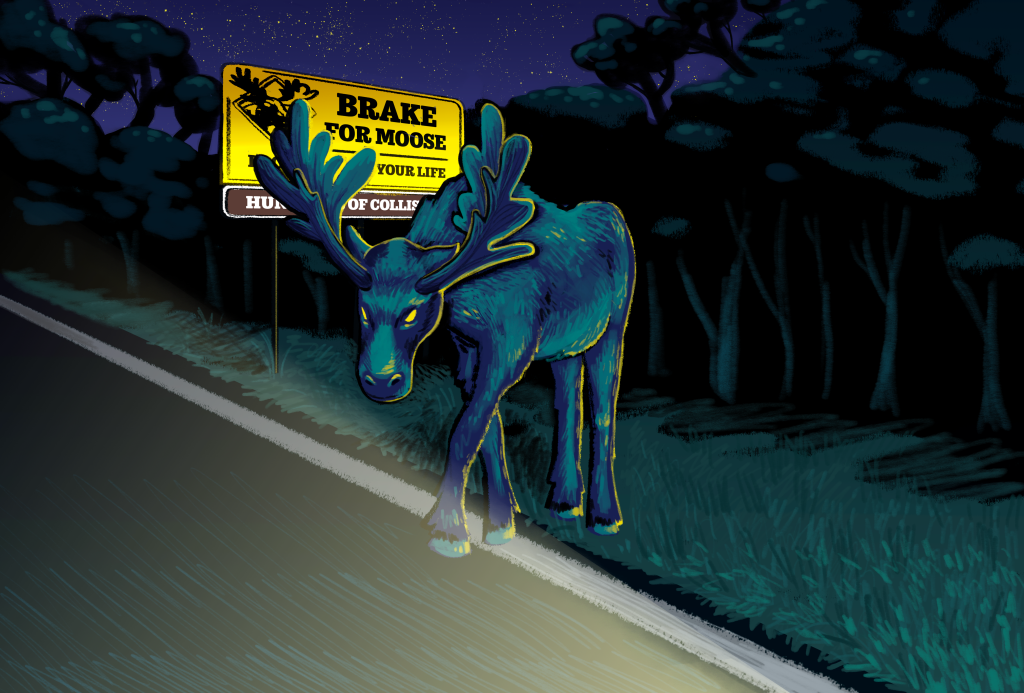 Like many others motoring through New Hampshire, I’ve often snickered at the signs lining the highways and byways with this important caveat: “Brake for Moose. It Could Save Your Life.” My typical reply is some variation of, “Gee, ya think?” Not any more. And I learned my lesson the hard way.

It was a bluebird day in early June, almost 15 years ago. Literally, there was not a cloud in the sky. I was on the road in upstate New Hampshire, and the only thing I could have wished for to improve my mood was to be behind the wheel of a convertible. I’d met an old friend for an early lunch in North Conway, and then began making my way along one of my favorite stretches of road anywhere — Route 16 through Pinkham Notch and Gorham and Berlin — on my way toward Errol. There, the plan was to head west on Route 26 toward Dixville Notch and my destination, The Balsams resort.

My early afternoon, however, didn’t go according to plan. Shortly after 2, just past the tiny town of Dummer (population, 306), I noticed that I seemed to have the road all to myself. That’s the major reason why the huge 18-wheel logging truck, fully loaded with fresh timber and heading south, caught my eye. “Man, that’s an enormous rig,” I thought. As the truck got closer, something else grabbed my attention — a large, dark blur off to my left.

They say things sometimes slow down during a traumatic event, and that clearly was the case for me on this ill-fated evening. I recognized that the blur was a large animal — either bear or moose — and immediately began hitting my brakes. I distinctly remember thinking, “That 18-wheeler is going to obliterate that thing,” even as my trusty Subaru Outback started swerving ever so slightly.

But the female moose was too quick for the logging truck. She sprinted across the road, and was directly in front of me when we crashed into each other. My fishtailing Outback struck her legs right at the driver’s-side headlights, avoiding a full head-on collision. The moose cow collapsed on the hood, crushing it. Fortunately, I had managed to stop quickly enough to prevent the moose from coming through the windshield, the cause of numerous fatalities.

In an instant, the moose slid off my Subaru’s front end, and I started to collect my thoughts. I couldn’t believe the airbags didn’t deploy (again, the result of the angle of the collision). I took a few deep breaths, and stepped out of the car. The logging truck? Long gone. I’m not even sure if the driver bothered to look in his rear-view mirror.

The moose was crippled, groaning at the side of the road, and my heart sank. Then I looked at my car, and my lunch nearly came back up. Imbedded in the crushed left side of my Subaru were hundreds, if not thousands, of black flies, unwitting passengers the moose had brought to the accident.

Underneath the car, fluid was pooling on the road. I had no idea what the damage was. I pulled out my ancient peanut-shaped cell phone to call AAA, figuring I needed a tow. Given the vagaries of cell service in New Hampshire’s remote north country (which mountain rescuers know all too well), my call got pinged to somewhere outside Hanover, near Dartmouth College. “I’m not sure what we can do for you,” said a polite young customer service representative. “Let me ask my manager. Please hold.”

That’s when things got really weird. As I stood beside my badly damaged Outback trying to formulate my next move, a big heavy-duty pickup, painted a deep, glossy black with orange and yellow flames spreading across the hood and front fenders, pulled over behind me. Out stepped a character who looked like a squat version of the infamous WWE wrestler, Haystacks Calhoun. The driver was a wide man, with blue-jean overalls, flannel shirt with cut-off sleeves, a greasy baseball cap, and a full, scraggly beard. He looked at the moose, and then at me, as I pointed to the phone, signaling I was on hold.

“Are you gonna keep that moose?” he asked.

“What?” I replied, incredulous.

“You gonna keep that moose?” he repeated, handing me a business card. “’Cause, if not, my brother in-law will take it. He’s a butcher, and he’ll send you 25 percent of whatever he sells the meat for.”

I stuck the brother-in-law’s business card in my pocket, started up the Subaru, bid adieu to Haystacks, and limped north to L.L. Cote’s general store at the intersection of Routes 16 and 26 in Errol. There, I asked how I could find a police officer to file a report. A clerk told me to head over to the post office across the parking lot, and he would have the police chief meet me there. After sitting around for 90 minutes, I finally connected with the town’s part-time police chief.

“Wait, this accident happened in Dummer,” he asked me. “That’s out of my district.”

“Please, can you just cut me some slack?” I asked. “The front end of my car is a mess, and I just need an accident report for my insurance company.”

“Drinking? It’s 2 in the afternoon,” I said, thinking that if I had been under the influence, I would have never stopped in time to prevent a worse outcome.

Eventually, I got my report, and drove off to The Balsams. Along the way, a large male moose emerged, slowly, on the side of the road. Shaking, I crept past him, giving him as wide a berth as possible. He didn’t give me a second look.

By the time I got to Dixville Notch, I needed a good, stiff drink. My colleagues for the weekend dubbed me “MK,” for “Moose Killer,” and everyone got a good laugh out of the episode (since only the Subaru sustained any permanent damage). But I knew I would never again laugh at those “Brake for Moose” signs. Ever.

Once I got back home, I discovered the business card of Haystacks’ brother-in-law in the pocket of my jeans. I wrote him a quick email with my address — “What have I got to lose?” I told my wife — and then promptly forgot about it. About six weeks later, a nondescript envelope arrived in the mail, without a return address. I nearly tossed it out, figuring it was junk mail.

Instead, I opened it. Inside was a check for $325, and a simple “thank you” on a Post-it note. Haystack’s brother in-law had kept his promise. And the moose, that poor, impetuous moose, at least covered the insurance deductible to have my Outback repaired.

The Answer: Who Is Sarah Cahalan