Libraries aren’t just a place to be quiet and read 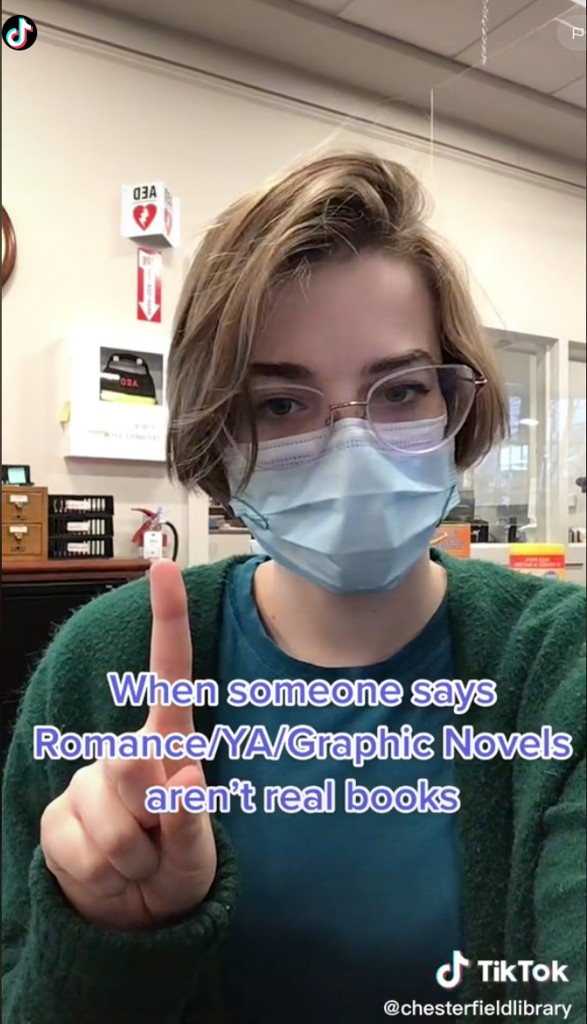 About 2,300 people were registered cardholders at the Chesterfield Public Library last year, according to the town’s annual report. But in recent months, the library’s reach has stretched far beyond this small southwestern New Hampshire community — thanks to TikTok.

After launching its account (@chesterfieldlibrary) in March, the library has racked up more than 4,800 fans on the social video app. Its TikTok videos routinely grab hundreds, sometimes thousands of views; one 7-second reel, a playful meditation on the passage of time as measured by the release date of a Pixar film, has been viewed 3.8 million times.

“I’m happy that I can show that libraries aren’t just a place to be quiet and read — we’re so much more,” Chesterfield Library Assistant Lucy Applegate told the Keene Sentinel, after the local media outlet was quick to take note of the library’s turn in the spotlight.

The library is no stranger to social media, with a Facebook presence that stretches back to 2011. Library Director Kathleen Packard told the Sentinel the library staff had been wanting to experiment with a TikTok account for a while, and a training workshop held at another local library encouraged them to take the leap — with an eye toward engaging younger audiences.

“Libraries exist to help connect people with information, and I’m happy we can do that with the use of things like TikTok,” Packard told the Sentinel.

A recurring character has also emerged in the form of “Chester,” an aptly named stuffed animal who’s seemingly always game to take center stage in an emerging TikTok trend.

“Libraries are different entities themselves on social media, so we can have a bit more freedom in the content we create, unlike celebrities or influencers,” Applegate, who also stars in many of the videos, told the Sentinel. “There’s a great community within TikTok of other libraries. This helps in spurring ideas for content, and we just support each other.”

The Chesterfield Public Library has apparently started to cultivate its own kind of virtual community too.

“I’ve started to identify usernames who comment often, who like our videos a lot, and it could really mean two things: Either these people are local and are patrons who come in often, or these are people who could be hundreds of miles away and possibly might never come into our library,” Applegate told the Sentinel. ”Whatever it might be, these are people who are getting joy from the content I’m creating, which is really cool.”

Where to Find the Best Ice Cream in NH

Where to pick your own blueberries in NH