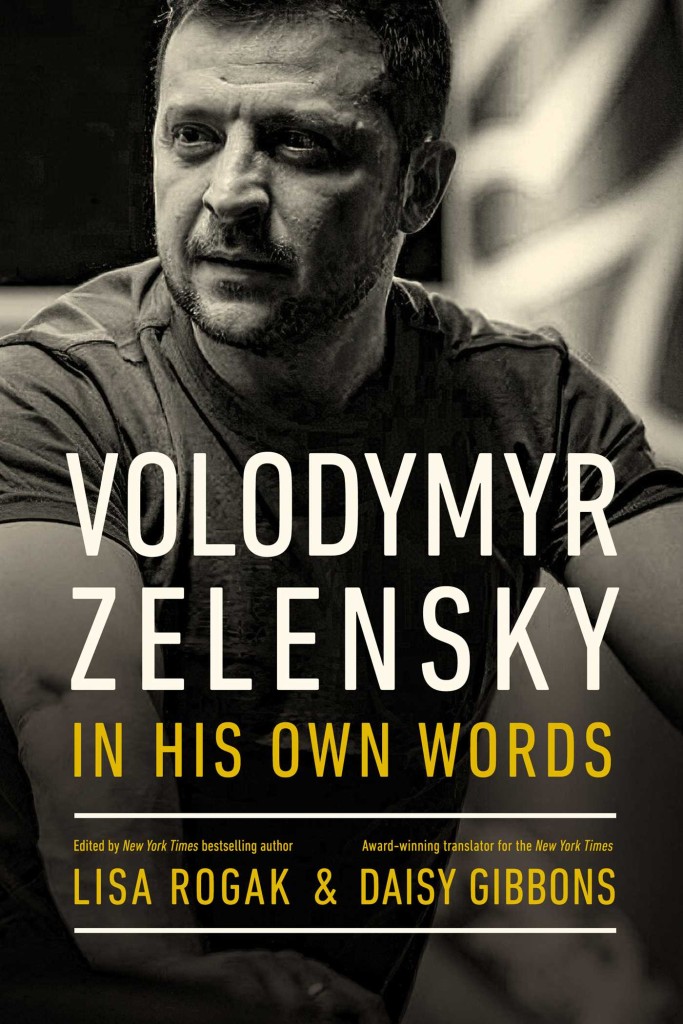 Like many of us, writer Lisa Rogak of Canaan was captivated by the courage and charisma of Ukraine President Volodymyr Zelenskyy in the face of the unprovoked Russian invasion of his country last February. But Rogak, unlike many of us, acted on her admiration for the former comic-turned-politician. As a result, the 59-year-old author will be publishing a new quote book featuring the wit and wisdom of Zelenskyy this fall.

“With Zelenskyy being such a hero, and being such a role model, if any of these books are going to sell, it’s going to be this one,” says Rogak. “The invasion was on February 24, and nobody knew what was going to happen. And this guy Zelenskyy was in the news, and he’s got a target on his head, and he’s not leaving. Everyone was paying attention to him.”

A month following Russia’s incursion, after absorbing news accounts, Rogak knew Zelenskyy was a great fit for her next project. On March 25, she reached out to her agent.

“He groaned,” says Rogak, laughing. “I’m hard-wired to think of subjects for these quote books, even though those books are sort of out of fashion right now. These quote books are impulse buys, and people aren’t going into the stores.”

Unlike the previous full-length biographies that Rogak has written on celebrities like authors Dan Brown, Stephen King and Shel Silverstein, comedian Jon Stewart and Jeopardy host Alex Trebek, a “quote book” is shorter, typically a trade paperback, that paints a picture of the subject using their own words. She’s done similar projects on Pope Francis, Hillary Clinton, Bill Gates, and Barrack and Michelle Obama.

“They’re expensive to do,” she says. “The publisher has to drop everything to do them to get them out. My agent sold it to Pegasus, a small, independent publisher out of Manhattan, which is distributed by Simon & Schuster. That’s good.”

Once Rogak got the green light, she had to find a Ukrainian/Russian translator to help her sift through reams of articles, speeches and videos featuring Zelenskyy. It was no easy task.

“My agent is always saying, we have to get the stuff that nobody else can get,” says Rogak. “So, I needed to find a translator, and the problem with finding a translator right now is that they’re all very, very busy, due to the state of the war. They went from having no work, or very little work, to being totally overwhelmed.”

Rogak partnered with Daisy Gibbons, a translator based in London (“So we have to deal with the time difference,” she says), and the two set to work researching Zelenskyy, from his early years as a comedian to the present.

“We found great, great quotes, with him talking about his family and his kids. He’s very, very funny. Of course, that doesn’t come out now, but his sense of humor and also his sensitivity to the human condition [are special]. He’s a rare human being,” she says.

“Here’s a quote about his children: ‘I feel like I’m on the same wavelength with them. I speak their language. My son and I communicate in an ancient language of gestures and sounds. We stand on all fours in front of each other and growl. Children bring me back to the sandbox, where I feel comfortable,’” she says. “That’s from an interview with a Ukrainian women’s magazine in 2014. You see that quote, and you get a little glimpse of who this guy is.”

Two weeks later, Rogak, with the help of Gibbons, had her manuscript finished.

“This is my skill set. I can put on my blinders and block out the world,” says Rogak. “The Zelenskyy book was harder because I’m out of practice, and I don’t want work like that anymore.”

Rogak’s work will be published this fall as a hardcover “gift book,” with roughly 300 extended quotes from Zelenskyy, organized by topics. It will be available through the usual outlets, including local bookstores and “the evil empire, Amazon,” she says, adding that she’ll be doing book-signings throughout the state.

She’s currently working on a biography of four women with the Office of Strategic Services (which later became the CIA) during World War II. Are there any other projects on the horizon?

“No, not really,” says Rogak. “I come up with weird ideas, and I email my agent. I don’t want to say I’m retired, but I don’t have to work like I did. I’m very fortunate in that regard.”