Our state produced and inspired many great authors and poets. Maybe there’s something in the water?

Our state is often rumored to have more working authors per capita than any other, so this list of some of the most famous is far from complete. But here are some of the writers who have so impressed the world that international visitors might stop in front of your house to ask the way to their homes. No fair saying, “Can’t get there from here,” when you have this map.

Legend for this map of New Hampshire. See our Google map to find these — and more — literary locations.

The Frost Place, Franconia, the Robert Frost Farm, Derry: Some speculate that the reason our famous poet left so many farmhouses behind to tour was that he wasn’t that great a farmer. Read more about him in our story “Rediscovering Robert Frost.”

J.D. Salinger’s house, Cornish: The notoriously reclusive author of “The Catcher in the Rye” was never that hard to find, but woe to those who bothered him in his retreat.

John Irving, Exeter: Novelist John Irving is from Exeter and attended Phillips Exeter Academy. Many of the famous author’s most acclaimed books (“The Hotel New Hampshire” and “A Prayer for Owen Meany”) are set in New Hampshire.

Sarah Josepha Hale Memorial Park, Richards Free Library, Newport: Dedicated on November 23, 2013 in celebration of the 150th anniversary of Thanksgiving, the Sarah Josepha Buell Hale Memorial Park is located on the Richards Free Library grounds. Hale was an influential publisher who convinced President Lincoln to establish Thanksgiving as a national holiday. A prestigious literary award is given in her name each year.

Thornton Wilder’s “Our Town,” Peterborough: One of the most famous plays of all time was based on Peterborough and was written at the nearby MacDowell Colony.

Grace Metalious, Manchester and Gilmanton: The author of the then-scandalous “Peyton Place” is known for Manchester (where she wrote) and Gilmanton (where she grew up). Learn more about her and the book (and later show and movie) that shocked (and delighted) the nation. 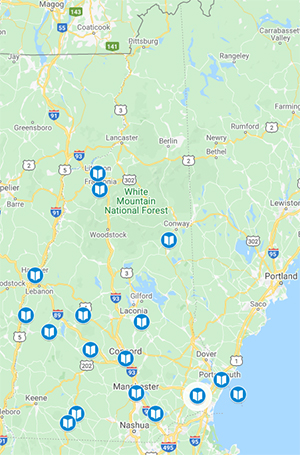 Find the places mentioned here and more literary locations in this Google map.

Eleanor H. Porter, Littleton: The author of “Pollyanna” grew up here, and there’s a statue on the library lawn that honors her famously upbeat character.

Jodi Picoult, Hanover: One of the most popular authors today, known for her topical fictional themes, writes in the shadow of Dartmouth College.

Elizabeth Yates, Peterborough and Concord: Yates, who wrote “Amos Fortune Free Man” and other works, died in Concord in 2001. The Concord Public Library has an award in her name.

Willa Cather, Jaffrey: Best known for “O Pioneers,” she won the Pulitzer Prize for “One of Ours,” an unconventional story about WWI. She’s buried in Jaffrey’s “Old Burying Ground” near the grave of Amos Fortune.

Thomas Bailey Aldrich, Portsmouth: His semi-autobiographical “The Story of a Bad Boy,” set on the seacoast, is said to have influenced Mark Twain’s creation of Tom Sawyer and Huck Finn.