Exploring the town of today with an eye to the past 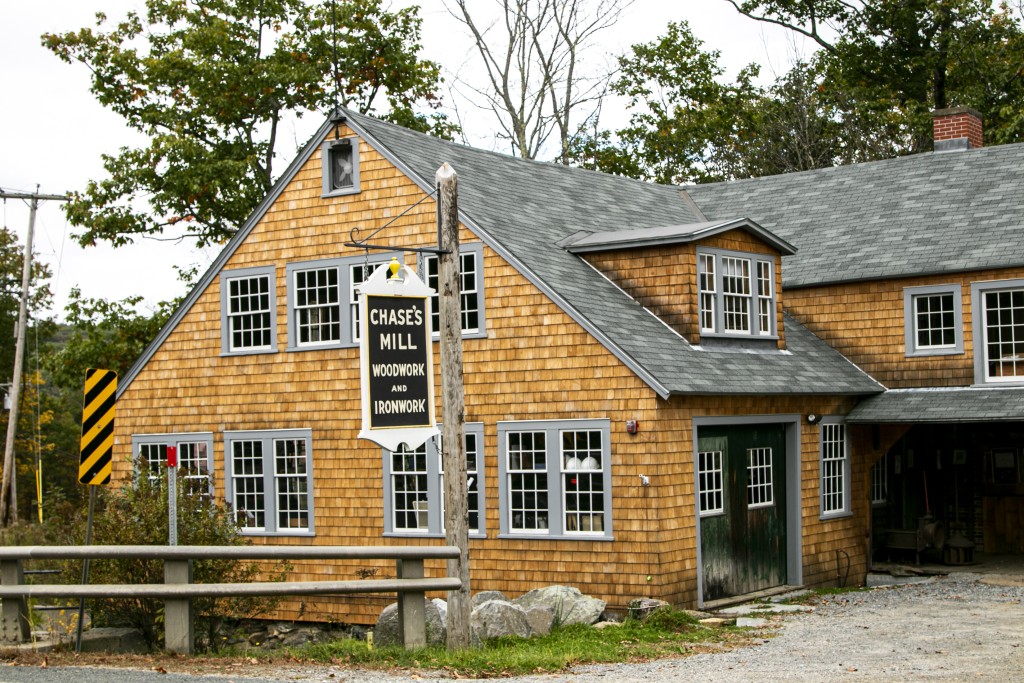 Of the five mills that once comprised Mill Hollow, only Chase’s Mill remains.

Our library — a room in our house where the walls are lined floor to ceiling with books — has a long shelf just for New Hampshire. It holds serious histories, reminiscences of lost eras, biographies, trail guides, gossipy stories by Eleanor Early, books on architecture, lumbering, geology and White Mountain hotels. Three books of these focus on Alstead.

Marion Nicholl Rawson’s “New Hampshire Borns a Town” brings to life the people and events of Alstead’s first 100 years in a more personal way than the standard dry town histories. Based on interviews with people who lived there as much as 80 years before she wrote the book, she traces families, and town institutions and traditions.

They shared letters, diaries, family Bibles, and handed-down accounts of their Alstead ancestors, which, when combined with historical records, makes a fascinating and frequently anecdotal account of how a small New Hampshire town sprang from eight intrepid settlers in 1753.

We first met Heman Chase almost 40 years ago at his home in Alstead to interview him on the publication of his book, “More Than Land,” also on our New Hampshire shelf. While we talked, he gave us a copy of his earlier, smaller book, “A Short History of Mill Hollow,” beginning my interest in that early manufacturing settlement at the outflow of Lake Warren. Accompanied by Rawson’s and Chase’s books, we explored Alstead and Mill Hollow with new eyes.

At various times, as many as five mills operated on waterpower from Lake Warren, which was dammed to regulate the flow. A grist mill, sawmills, and mills for carding, spinning, wood-turning, shingles, and starch (made from potatoes) all operated at one time or another, plus a cracker mill that also made gingerbread. 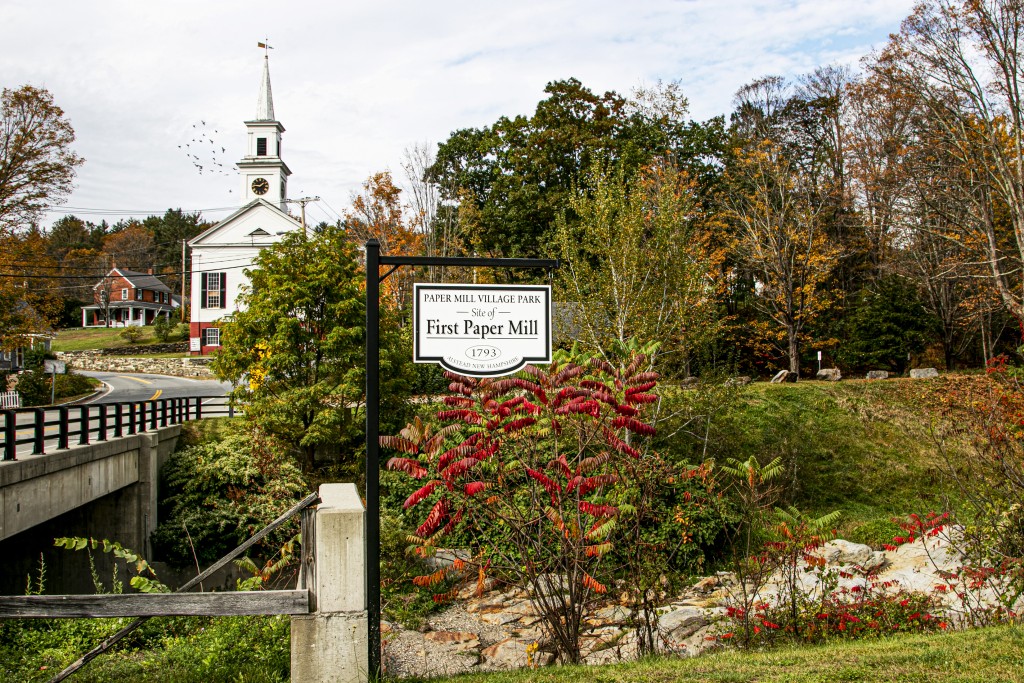 The Alstead Historical Society can be seen in the background from Paper Mill Village Park.

Today, the only mill there is Chase’s Mill, rebuilt in the early 1900s on an earlier mill’s foundations. From its beginning, the mill was designed as a community center, with a room upstairs that could be used for meetings and dances. Chase used it for his own woodworking and later, with his wife Edith, to teach woodworking to neighborhood children.

After restorations by the Mill Hollow Heritage Association, the mill has returned to that use — it is now the center of an active schedule of classes in subjects that range from woodworking for children and adults to spinning, felting, tile-making, pencil sketching and watercolor painting. Programs on the mill’s history are given by Chase’s daughter, Margaret Chase Perry, and among the class teachers are his daughter, Ellen Chase, and granddaughter, Nancy Botkin.

Although it doesn’t make crackers or gingerbread, as the mill at Mill Hollow did, Orchard Hill Breadworks has revived baking in Alstead. In 1997, Noah Elbers began baking and selling bread at his grandparents’ farm on Orchard Hill Road. Now selling breads at the farm (just out of the oven on Tuesdays, Thursdays and Saturdays) and at various markets throughout the region, Orchard Hill has become far more than a bakery. The farm is a community gathering place with Tuesday Pizza Nights through the summer and annual events that include craft and farmers markets.

Mining historian Jim Pecora is not reviving Alstead’s several mines, but hopes to revive interest in its mining history and to preserve records and images before they are lost. His Mica Mine Schoolhouse on Baine Road is the future home of the New England Mineral Museum, now operating as a mobile museum, mounting exhibits in historical societies and other venues, and leading tours to abandoned Alstead mines.

In 1834, Sylvester Mitchel was hunting for his lost sheep when he discovered a deposit of mica, from which he began producing sheets for stove doors and lanterns. That was the beginning of what became one of New England’s largest mica mines. That was also the beginning of Alstead’s remarkable mining history.

By the 1950s, the Colony Mine, on the side of Cobb Hill, was the world’s most productive feldspar mine, producing minerals of such purity that it supplied the Corning Glassworks in New York. Other active mines were a mica mine and a pegmatite quarry off Cobb Hill Road, and the Beauregard Mine, near the Gilsum line, which was worked intermittently until the 1940s. Most of the mines are on private land, but mineral collecting is allowed at some.

Two of Alstead’s landmarks are thanks to local boys who went off into the world to seek their fortunes — and succeeded. 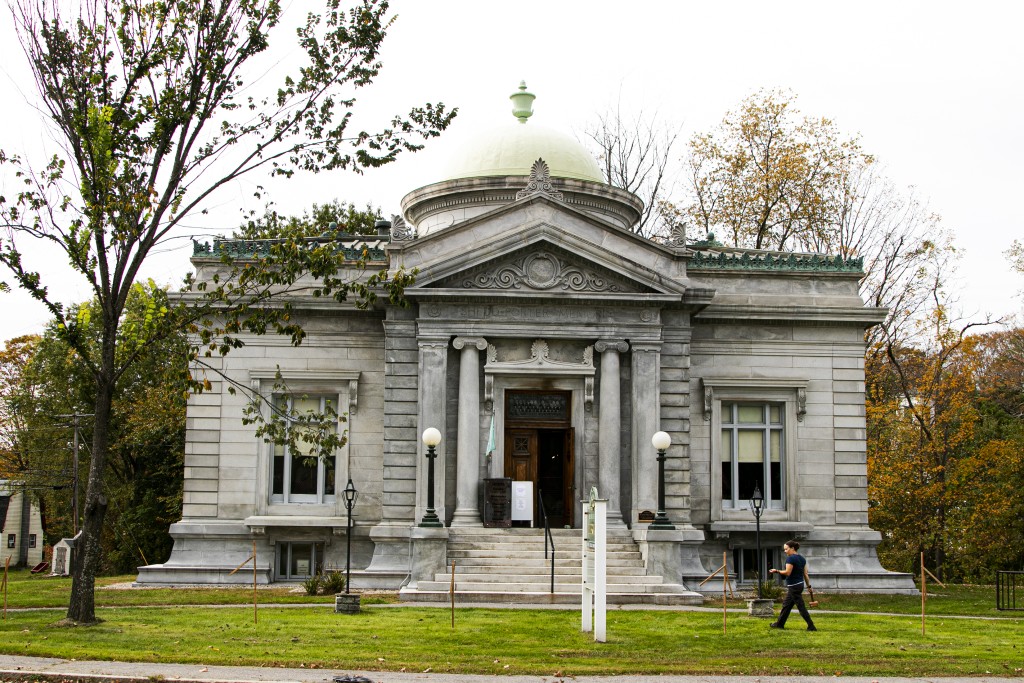 The Shedd-Porter Memorial Library was built in 1910, in the then-fashionable Beaux-Arts style.

It’s hard to miss the Shedd-Porter Memorial Library, as it’s a prominent feature beside the river at the junction of 12A and 123. Built in 1910 in the then-fashionable Beaux-Arts style, it was the gift of John G. Shedd, who grew up on a farm in Langdon. He left for Chicago in 1871, where he eventually became president and chairman of the board of Marshall Field and Company and a major Chicago philanthropist.

On Route 123A, where the Cold River drops over a falls and through a rocky gorge, Vilas Pool Park was the gift of Alstead native Charles Nathaniel Vilas. Leaving in 1870 at age 17 to work as a hotel clerk in Worcester, Massachusetts, Vilas went on to become co-owner of the Fifth Avenue Hotel in New York City.

Retiring to Alstead in 1908, he financed the construction of Vilas Pool Park, which opened in 1925 with swimming docks, a pavilion, boat house, stone tables and fireplaces, along with a carillon bell tower. In February, 2022, Vilas Pool Park was added to the N.H. State Register of Historic Places.

The Villages of Antrim