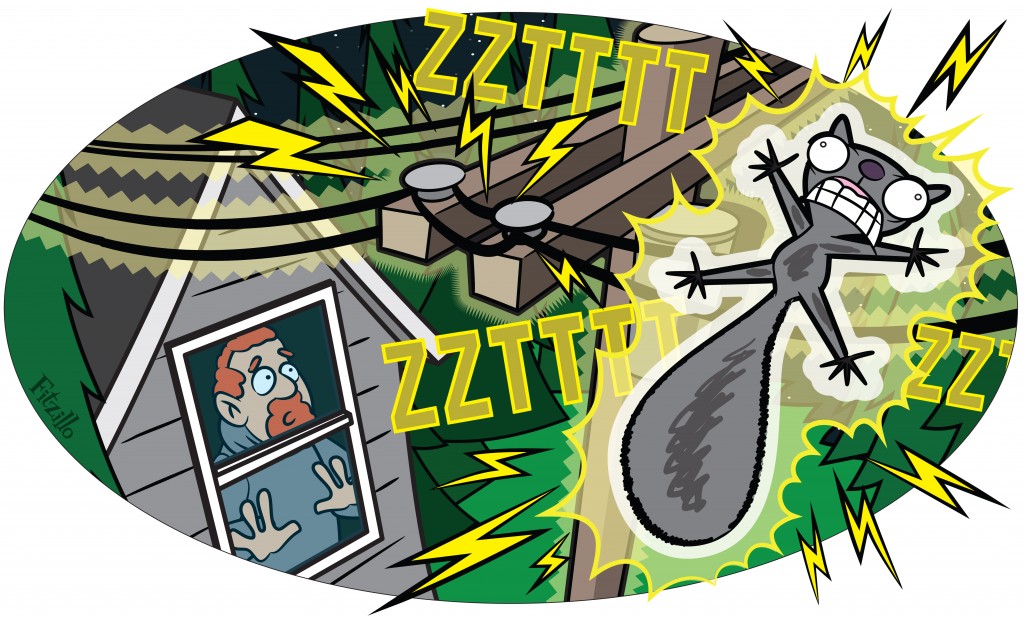 We lost power last night, because we live in Sandown, and this is what we do.

It’s fairly predictable this time of year. Or any time of year. A slight breeze whispers through a stand of white birch at the end of the driveway, and suddenly it’s 1843 and I’m old-timey Yankee folk gnawing on hardtack whilst waiting patiently for them to invent Bruins games.

After 25 years in our southern New Hampshire home, we should be used to it. We’ve weathered two major ice storms, two wicked wind storms and the remnants of Hurricane Irene — each of which left us in the dark for at least five days. Then there are the sundry fallen trees and suicide squirrels who tap dance on the transformer across the street just before going poof in a fatal pink cloud of ozone, plunging us into darkness again. Squirrels are idiots.

This time, though, it was just a Tuesday. We were due, apparently.

You’d think we’d be tough enough to deal with this by now. I say unto you, however, we are not. We’re a lot better at sighing loudly every few minutes and woe-is-meing the hours away than we are at preparing for this somewhat regular occurrence.

And yes, there are alternatives to sitting in the dark and re-dialing the utility’s outage hotline over and over, such as purchasing a generator. There are two immediate problems with this plan:

So, with a distinct lack of generator in our backyard and the sun dropping below the treeline, we opted to head out for dinner. Fifteen minutes later, our family of three walked into Fremont Pizzeria, and were seated at the exact table where my wife and I settled on our daughter’s name 19 years ago. (It came down to either Katherine or Extra Cheese.)

Within a few minutes, the tables around us filled with our neighboring townsfolk whose homes were also in the dark. We all huddled together in this oasis of light, checking our phones, and cursing the utility company while Nick slung some amazing food our way.

You’d think this gathering would create a sense of community — an oasis borne of a shared hardship. Only you’d be mistaken. Granite Staters are a hardy breed who can live without power for quite some time. It doesn’t mean we won’t grouse about it. Pretty much everyone in the place frowned at their food, knowing that when the bill was paid and the waitstaff tipped out, we’d have to go home to a cold, house-shaped shadow.

I Was Told There Would Be Roadies