To paraphrase Freud, sometimes a cigar box is just a cigar box — unless Ben “Gitty” Baker gets a hold of it 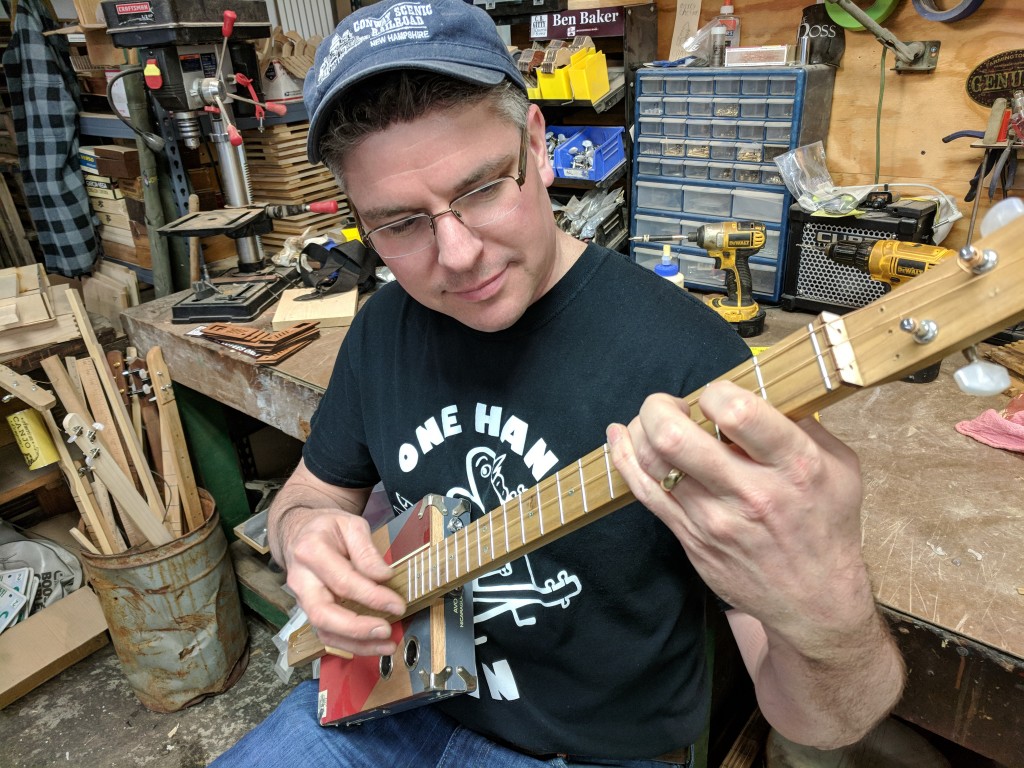 Ben “Gitty” Baker puts a cigar box guitar through its paces at his workbench in the C.B. Gitty Crafter Supply shop in the Gonic mill in Rochester. Photo by Glenn Watt.

There’s a wall on the second floor of an old mill building in the Gonic area of Rochester, where a mismatched collection of beer cans, cigar boxes and even a shovel are wired to wood and metal.

At first glance, it looks as if Ben “Gitty” Baker, founder and owner of C.B. Gitty Crafter Supply, is bolting spare parts together in an unusual art project in the sprawling second-floor space overlooking the Cocheco River. But enthusiasts of cigar box guitars — smallish, rustic-looking, surprisingly harmonious instruments — would recognize the collection as a museum dedicated to the handmade instrument.

“This is the wall of random stuff that I didn’t have anywhere else to put,” Baker says. “These are things I bought from other people, prototypes and things other people have sent me.”

Cigar box guitars trace their origin back to the Civil War, first appearing in engravings by Edwin Forbes. One shows a Union soldier making an instrument out of a cigar box, and another depicts a solider playing a cigar box fiddle. Cigars were once shipped in barrels, but an edict from the US government spurred a change that saw them delivered in boxes.

“It didn’t take enterprising people long to realize this was a nice box and they could make something from it,” Baker says.

What they made were musical instruments — uncomplicated, inexpensive and easy to make and play. Even now, the homespun devices look simple enough, but in the right hands, they become a gritty, slippery instrument, capable of alternately growling, singing and weeping. Depending on a number of elements, it can be a banjo, a dobro or a full, rich-sounding acoustic guitar.

“One of the beautiful things about them is that each one is very likely to sound a little bit different,” Baker says. “One of the most frequent things I hear people say is not so much exactly describing the sound, but that it’s surprising. They’re surprised that sound, whatever its exact nature, could come from a cigar box — from a homemade instrument. Some have a grittier, growlier tone. If you put the lower sound strings on it, it’s going to have that bluesier, growlier sound. If you put the higher-pitched strings on it, it’ll have that banjo, dulcimer sound. Same exact instrument, but it depends on how you string it or how you tune it.”

There aren’t a lot of rules or gatekeeping when it comes to making or playing cigar box guitars — a culture cemented, perhaps, from the instrument’s primitive beginnings. However, there are things that have become the norm. Typically, they are three-string instruments, tuned G-D-G. Many players use a slide, making it a natural for the blues, while others strum easily made chords, making it a useful accompaniment instrument.

“The fact that you can pick that guitar up and strum and it sounds good without doing anything else on the neck is great,” Baker says. “In fact, you can use one finger, which makes it even more accessible.”

The impromptu wall of fame at Gitty HQ features one-, two-, three-, four- and six-string versions, various canjos and a lap-steel guitar. Another uses a dog dish as a resonator, and still another is topped with a Mississippi license plate. It also includes the instrument that started Baker on the road to becoming the center of the universe of all things cigar box guitar. That instrument — a one-string canjo crafted in Gatlinburg, Tennessee, and made from a beer can — intrigued the former tech-worker-turned-de-facto-luthier.

“I had gotten into bluegrass mandolin,” he says. “I bought a book about how to build mandolins, and it turns out that’s really hard. My friends brought me this as a gift, and I thought, ‘I could build one of these.’ So I started researching canjos. There isn’t much about them online back then, but there was a little about cigar box guitars.”

Baker didn’t have any traditional luthier training (“I have a lot of different hobbies and I rolled them all into this”). Instead, he worked from a set of the original free plans for building the guitar made available by renowned enthusiast, and founder of the online Cigar Box Nation, Shane Speal. From there, their popularity, and Baker’s business, took off.

“We were the first,” he says. “There were a few guys wiring pickups and selling them, making slides out of bone. I got into it as a hobby and got into selling fretwire. I was in the discussion groups and people were saying it would be great if they could buy this or that, and it grew from there. We were the first to focus on cigar box guitars as a whole and then introduce the kits. Being the first and the biggest, we’ve been able to be a part of the ship and also help steer it.”

C.B. Gitty offers completed guitars, but its core business is selling kits that allow people to create their own instrument, from concept to completion. The company has grown to include 10 employees working in a 13,000-square-foot space in the Gonic mill. Just don’t look for classically trained luthiers.

“To bring a real luthier in here, they’d spend a little too much time telling us what we’re doing wrong,” he says. “How do I say this nicely? We eschew convention.”

“We’ve helped thousands and thousands of people get into this and actively spread the word and push this idea that anyone, anywhere can build their own instrument and make music on it,” Baker says.

A-listers, many of them known for slinging high-end six-string guitars, have adopted the instrument over the years.

Smokin’ on a Cigar Box 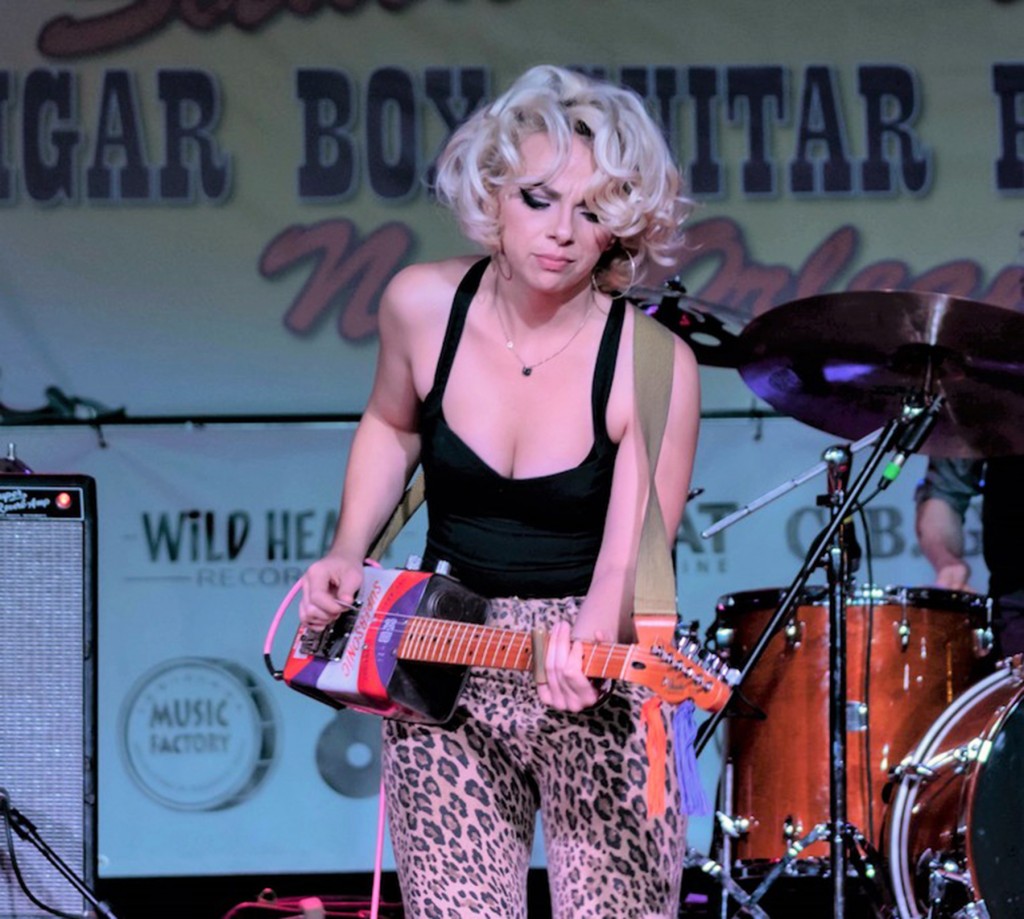 Samantha Fish will hold court at the Samantha Fish Cigar Box Festival in January in New Orleans. Rochester-based C.B. Gitty Crafter Supply is a sponsor of the festival, and of the International Cigar Box Video Playoffs — a chance for enthusiasts to post video of themselves playing homemade instruments. neworleanscbg.com

Though it was born from humble beginnings, the cigar box guitar has enjoyed a little time in the spotlight. A number of high-profile artists have added the angular instrument into their arsenal, and while C.B. Gitty Crafter Supply founder Ben Baker hasn’t personally handed one of his guitars over to a celebrity, he has recognized elements of his handiwork. “Certainly there are Gitty parts on a number of those guitars,” he says. Among the notable cigar box guitar enthusiasts:

Paul McCartney won a Grammy for “Cut Me Some Slack,” on which he plays a cigar box guitar with Dave Grohl (who can be seen online playing a CBG in his own studio), Krist Novoselic and Pat Smear.

The fact that Jack White plays a CBG should be a surprise to no one. This cultivator of the curious makes music on anything, including one-string diddley bows and handmade cigar box guitars.

Kansas City singer-songwriter/blues guitarist Samantha Fish brought the CBG from the campfire to the front of the stage with her soulful, molten playing. She’s now involved with the Samantha Fish Cigar Box Festival in New Orleans — a celebration of the homemade instrument scheduled for January 13-16, 2021. C.B. Gitty Crafter Supply, of Rochester, is sponsoring the festival and the International Cigar Box Video Playoffs (neworleanscbg.com).

Shane Speal, a legend in the CBG subculture, is often referred to as the King of the Cigar Box Guitar. He is the creator of cigarboxnation.com, the author of “Making Poor Man’s Guitars,” and is credited with having lit the fire under the modern CBG movement.

Seasick Steve is a former busker who gained notoriety by laying down a rootsy brand of Americana/blues on his handmade diddley bows, hubcaps and CBGs.

Justin Johnson, known as “The Wizard” for his mastery of anything with strings, often reaches for a CBG.