Scott Poteet has the right stuff 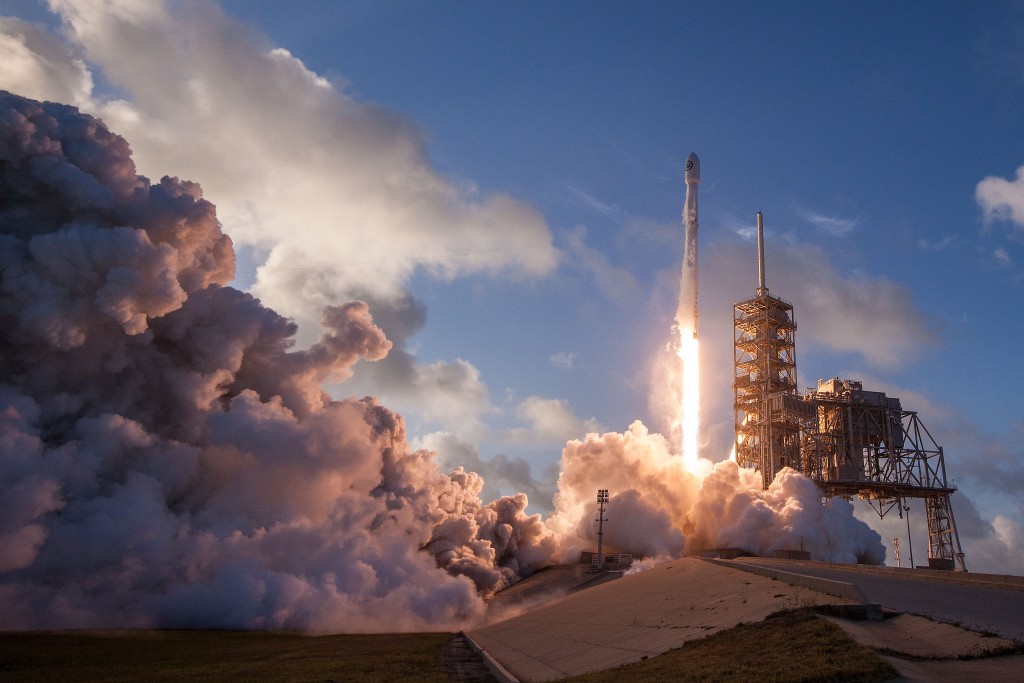 SpaceX’s Inspiration4, the first private human spaceflight, included Poteet as commander and mission director. The flight was launched September 15, 2021, and was featured in the Netflix documentary “Countdown.”

Flying is as natural as breathing to (Retired) Lt. Col. Scott “Kidd” Poteet, who has been taking F-16 fighter jets to the skies since graduating from the University of New Hampshire in 1996. He has patrolled the demilitarized zone between North and South Korea, and flown combat missions over Bosnia, Kosovo and Iraq. In 2007 and 2008, he rocketed into the blue with the Thunderbirds, the Air Force’s elite precision team, executing breathtaking maneuvers in his supersonic Falcon while often flying only 18 inches away from his teammates.

Now retired from the Air Force, Poteet has his eyes fixed on an even broader horizon — a trip to space. Early next year, Poteet will serve as mission pilot for Polaris Dawn, guiding SpaceX’s Falcon 9 rocket closer to the moon than the United States has been since NASA’s Apollo missions of the 1970s.

Growing up in the 1980s, Poteet was inspired by movies such as “Top Gun” and “The Right Stuff,” but he never thought he would add “astronaut” to his resume. “Being an astronaut is the pinnacle of the pyramid when it comes to flight,” he explains. “Historically, astronauts exemplify the best and brightest in physical, mental and technical achievement. NASA’s criteria is very strict and the standards are very high. However, few people can meet those standards. If we are to truly explore and understand space, we need more dedicated people up there. Private exploration opens the door for those who have skills in key areas to help gather critical information. I was surprised and honored to find a door opening for me. I am keenly aware that I am standing on the shoulders of all the astronauts who’ve gone before.” 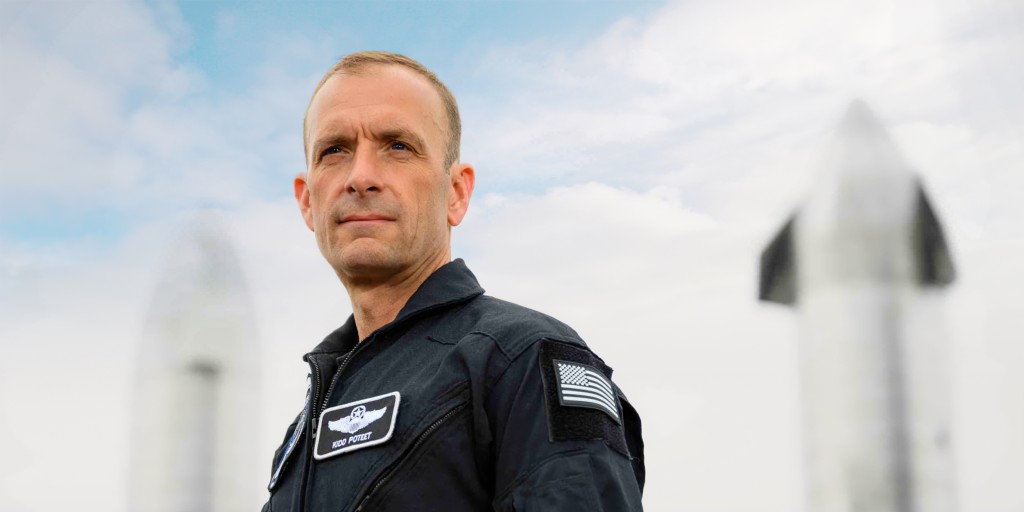 Poteet is not your typical pilot. Although he grew up in Durham, New Hampshire, and frequently went to air shows at Pease Air Force Base, he was not fascinated by planes as a youngster. That changed his freshman year at UNH when he went on a refueling flight in a KC-135 Tanker through UNH’s Air Force ROTC group. “I got horribly air sick,” recalls Poteet, “but when I saw the F-16 being refueled, I was hooked.” Poteet joined ROTC but was met with skepticism when the recruiter queried him about his choice of Air Force career. “I said ‘fighter pilot’ and the guy laughed,” he says. “At that time, most fighter pilots were technical and engineering majors with GPAs of 3.8 or higher. I was majoring in outdoor education and my average was not that high. But the recruiter’s remarks galvanized me, and by graduation, when I received my commission, I was accepted to flight school.”

After 20 years in the Air Force, Poteet worked for Draken International, a company providing advance support for all branches of the armed forces. During that time, he reconnected with Jared Isaacman, the company owner, and an entrepreneur Poteet had met during his Thunderbird days. A former air show jet pilot, Isaacman is fascinated by space exploration and is a partner in SpaceX. He was named commander of Inspiration4, the first private human spaceflight, and got Poteet involved as mission director. The flight, which launched September 15, 2021, was featured in the Netflix documentary “Countdown.”

“Being the mission director taught me a great deal,” says Poteet. “I sat at mission control and was involved in every aspect of launch, mission, reentry and recovery. When the opportunity came to pilot Polaris Dawn, I didn’t hesitate to say ‘yes.’”

There are few similarities between flying a fighter jet doing up to Mach 2 and a rocket, but Poteet found that his time as a Thunderbird brought valuable resources to his training for Polaris Dawn. “The Thunderbirds were a close-knit group,” he recalls. “When you fly that fast and that tight, you must have absolute trust in your team, and it is the same with the crew for Polaris Dawn. We must know each other’s jobs and rely on each other, no matter what the situation.” 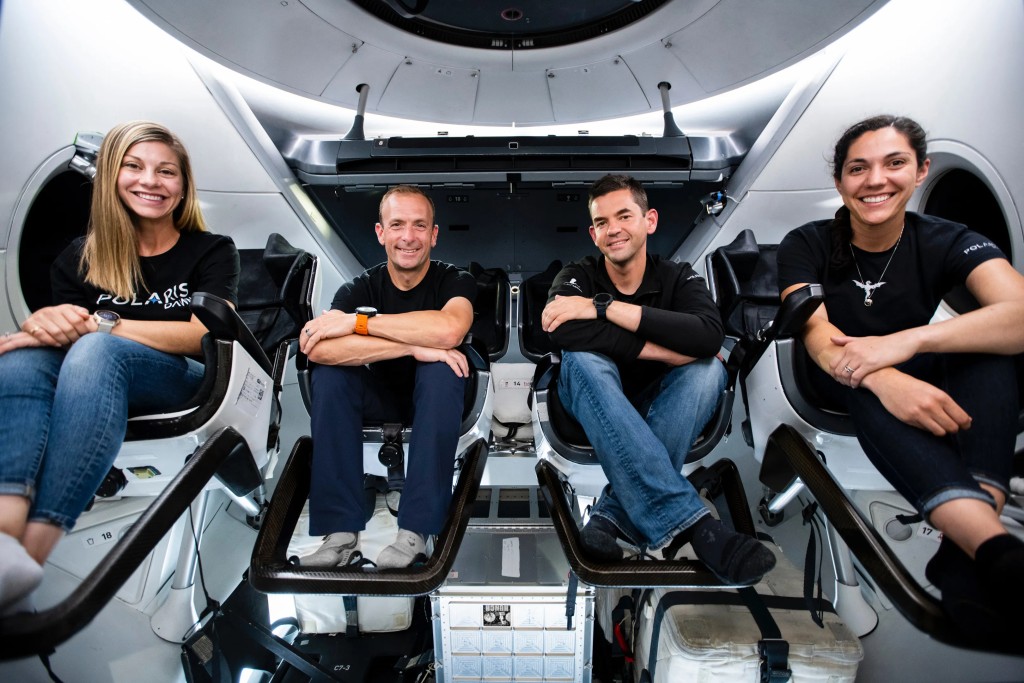 The Polaris Dawn crew in the simulation chamber at SpaceX headquarters. Polaris Dawn will spend up to five days in the highest Earth orbit attempted
since Gemini 11 orbited more than 850 miles above Earth in 1966. This time, the crew will conduct a commercial spacewalk and other studies.

Polaris Dawn consists of a Dragon crew capsule mounted to a Falcon 9 rocket. “It’s a sophisticated, largely automated system,” explains Poteet. “But we must work in synch and be prepared for any contingencies. We follow checklist procedures, just like any flight crew, and we need to understand how systems work. For me, that has been the biggest challenge — the mental workload. Flying a fighter is second nature; embracing this technology had a learning curve.”

The Polaris Dawn crew consists of four members: Jared Isaacman as commander, Poteet as pilot, and Sarah Gillis and Anna Menon as SpaceX mission specialists. Both Gillis and Menon played critical roles in the Inspiration4 mission. Gillis oversees training and Menon was involved in developing the checklist procedures. Unlike NASA crews, which may train for three to four years before venturing into space, the training for Polaris Dawn has been compressed into six or seven months. There have been three phases: Phase One has been understanding the avionics, system functions, crew roles, contingency and emergency plans, and other functional operations aspects. Phase Two has focused on the specialized training needed for the mission’s research, such as the spacewalk, medical research and Starlink tests, and Phase Three emphasized team building and an understanding of group dynamics. To that end, the team did scuba diving, flew in fighter jets, and climbed Mt. Cotopaxi in Ecuador.

“Some of the training overlaps in terms of purpose,” explains Poteet. “For example, climbing the mountain was about teamwork but also, at 19,348 feet, you are placed in a harsh, cold, high-altitude environment that you can’t just leave if things get tough — you have to work the problem. Scuba diving was about trust and pushing our limits, but when you are trying to do tasks underwater, it also mimics some of the challenges of zero gravity.”

The Polaris Dawn mission is multifaceted. The craft will try to reach the highest Earth orbit in the history of human spaceflight, reaching an initial apogee of 1,400 kilometers and breaking the Gemini 11 record. They will also touch the lower part of the inner Van Allen belt, an area where astronauts haven’t been in 64 years. This area has concerned NASA space scientists because of possible significant radiation exposure. However, going through the belts is the shortest route to the moon, so information about this region is key. Polaris Dawn will skim along the edge and the crew will receive about as much radiation as through a total body CT scan, according to Poteet. Nonetheless, radiation levels and impacts will be monitored for further study. The crew will also perform the first commercial spacewalk or EVA (extravehicular activity) and the first using SpaceX suits. 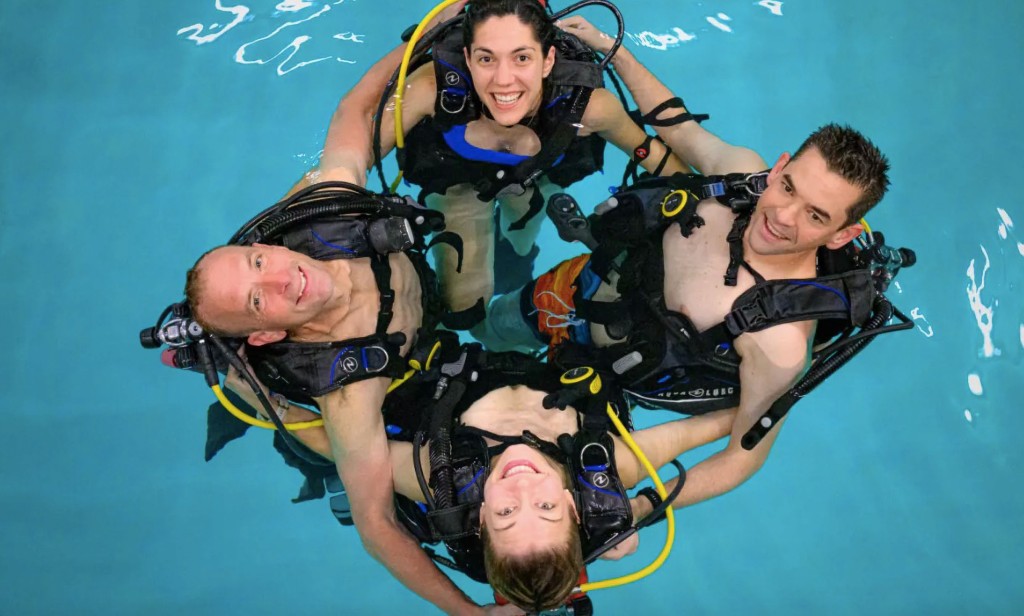 The Polaris Dawn crew training in the pool to gear up for their mission to orbit Earth aboard a SpaceX Dragon capsule, which is expected to launch in March 2023

A major part of Polaris Dawn’s five-day mission focuses on medical science and research that will help scientists better understand the challenges of long-term spaceflight and the effects of both radiation and microgravity on the human body.  According to Poteet, one of the conditions that could hinder future space exploration is SANS, spaceflight-associated neuro-ocular syndrome, which can manifest in zero gravity. “We need to understand how spaceflight impacts the brain and spine, and take measures to protect against adverse effects,” says Poteet. “SANS causes problems with the ocular nerve, brain and cognitive functions. For this mission, I will likely have a transducer implanted underneath my rib cage that will be connected to a stent that will measure any changes in my spinal fluid pressure. The catheter will be in place before the flight so that doctors can see if and how things alter during and after the flight. This data will not only benefit future astronauts but also be extremely useful in medical science here on Earth — as will the other health data we collect. We already know that some of the measures we may take to protect against SANS or treat it, could be very helpful to children suffering from hydrocephalus.”

The Polaris Dawn mission will also test SpaceX’s new Starlink laser communications system. These intersatellite laser links will reduce the need for ground-based satellite connections and will be essential as astronauts go farther and further from Earth’s orbit.

Like the Inspiration4 flight, the Polaris Dawn mission has a strong philanthropic component, thanks to its partnership with St. Jude Children’s Research Hospital, the world’s premier pediatric cancer treatment center. The Inspiration4 flight raised more than $240 million for St. Jude, and the medical research conducted on Polaris Dawn will directly benefit St. Jude’s efforts. In addition, the Polaris Dawn team is assisting St. Jude’s in its efforts to be a global partner by bringing its medical expertise to areas around the world. To that end, Poteet and Isaacman flew eight Starlink terminals to Poland so that makeshift hospitals could be established and cancer patients triaged. Poteet and Isaacman have flown humanitarian missions in support of Ukraine, delivering more than 4,000 pounds of medical supplies.

Poteet is eager to make his first trip into space and expects the journey to be not only exciting but transformative. “I think seeing the Earth from space will be profoundly moving,” he says. “Everyone who has gone before talks about how beautiful and fragile our planet seems from space. I expect that view, and being immersed in the sheer vastness of space, will be an experience that stays with me forever.”

Not surprisingly, Poteet is a proponent of space exploration. “I think it’s human nature to want to know what’s out there,” he says. “But it’s also a fact that the research we do, and the technology we develop in order to explore space, directly benefits life on Earth. We learn how to solve problems that also help the human condition. In addition, space exploration is an insurance policy. We need to identify other planets that we could colonize if life on Earth was threatened.”

Poteet makes his home in Monument, Colorado, with his wife and three children, ages 16, 14 and 12, but hopes to return to the Granite State soon. His family is “very supportive” of his latest adventure but will be glad when he is back on terra firma. “After I retired from the Air Force, they wanted me to relax,” he says. “But I’m known for pushing the envelope and when this opportunity came up, they understood that I had to go for it. However, I promised that, after this, I would stop adventuring for a while. This will be my first and last trip to space. After this, we hope to get an RV and explore America. There is a lot to discover down here as well.”