A boy and his father went fishing early one sunny morning. From shore, they cast their lines and let them drift in the water. After a while the boy lay back among the grasses, felt the sun on his face, and fell asleep. 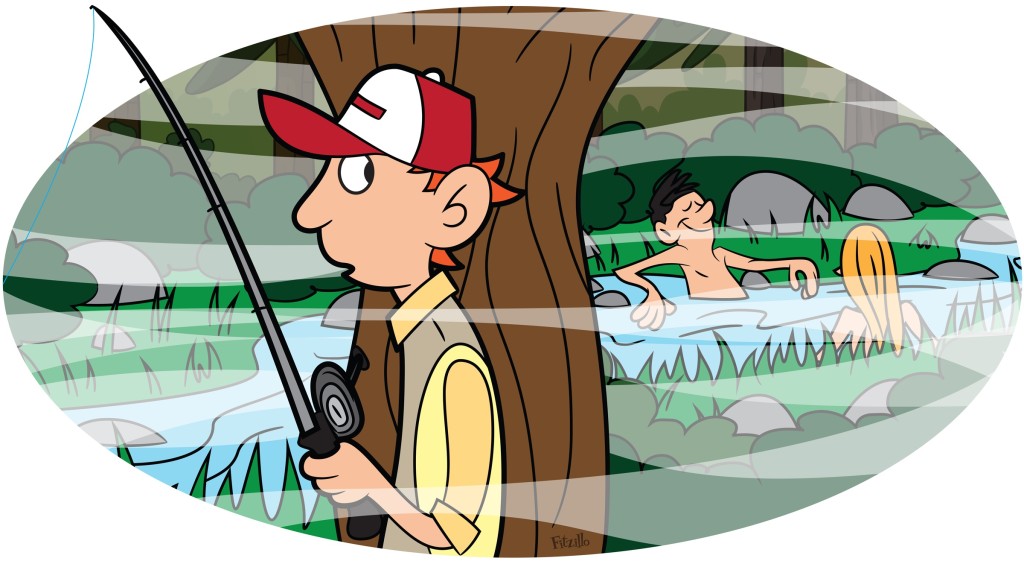 A boy and his father went fishing early one sunny morning. From shore, they cast their lines and let them drift in the water. After a while the boy lay back among the grasses, felt the sun on his face, and fell asleep.

As he slept, a heavy fog rolled in.

Startled awake by the scream of a seagull, the boy rubbed his eyes and looked around. “Daddy,” he said, “we ain’t here no more!”

Of morning fog, we say, “It’ll burn off by noontime.” Usually it does.

On the Sugar River in Newport, Nancy Pollard’s ancestors ran a sawmill. The mill is long gone, but the swimming hole remains. In a family story, a Pollard cousin who lived by the river called the police in a tizzy. Young people were in the river, she reported. Cooling off. In the nude.

When an officer arrived to investigate, he took a look around the property and squinted in the direction of the river. “I don’t see anything,” he told the whistleblower.

“Follow me,” she said, and led him through the house into a bedroom. She pointed to a wooden chair. “Officer,” she said, “if you stand on that chair and look out that window, you’ll see what I mean.”

Sometimes to get a good look, you need to stand on a wooden chair. With binoculars.

In Vermont — that upside-down, western state — a visiting nurse told a story of community outreach. “Part of my job,” she said, “is to figure out what kind of help people need.” Among her tools: an informal cognitive assessment. The nurse sat at the kitchen table having coffee with Annie — a nonagenarian with bright, white hair that draped her shoulders, and even brighter blue eyes. Did Annie mind if the nurse asked a few questions just to see how she was doing?

The nurse asked Annie the day of the week, the year and who was president of the United States. Annie answered correctly and without hesitation.

“Just a couple more questions,” the nurse said. “Do you ever get depressed?”

“Are you ever sad for no reason?”

“Annie,” the nurse said, “do you ever go outside … with no clothes on?”

Annie’s bright eyes grew even brighter. “Oh, my dear,” she said, “those were the days!”

Much as I enjoy Vermont’s green, rolling hills and Bernie Sanders’ mittens, as a lifelong New Hampshirite, I don’t think I could ever live there. It’s too far from the ocean.

Imagine living all your life in South Dakota like Aunt Wini, who always wanted to see the ocean, but never got the chance — until her nephew joined the military and was stationed at Pease Air Force Base. “Come East, Aunt Wini,” he said. “I’ll pay for your ticket and show you the sea.”

She flew to Newington and the nephew drove her to Rye Beach so she could see the ocean at long last. As they stood on the sand looking out at the water, he noticed that Aunt Wini looked a little down in the mouth. “What’s the matter?” he said.

“Nothing,” she said, “I just thought it would be bigger.”

*Thanks to Nancy Pollard for her Sugar River story. It brightened my day. If you know a funny Yankee yarn, send it to me via ayuh@nhmagazine.com.