Finding A New Life for the Kelley Corner School 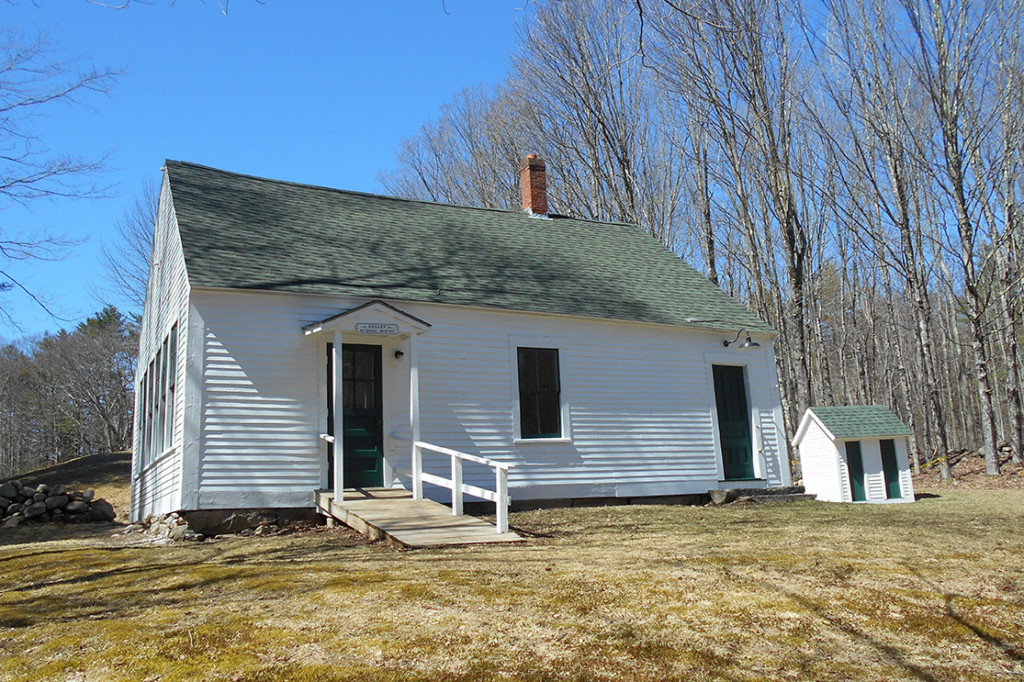 “A man’s ambition must be small, to write his name on the back house wall” scribbled a philosopher inside the two-seater outhouse behind the Kelley Corner School. Perhaps the graffiti artist had more ambition than he realized because he went on to draw the Cracker Jack’s sailor, a curvy woman, and declare himself “the best artist of the world.” D.P.K. and G.E.H. also wrote their initials on the backhouse wall along with the year 1936. Since the school closed in 1940, the self-proclaimed “best artist of the world” was likely one of the last students to attend this iconic little schoolhouse.

The Kelley Corner School with the two-stall privy that once accommodated philosophers and scholars is located on a dead-end dirt road in the corner of the world known as Lower Gilmanton. Lower Gilmanton was the first settlement in Gilmanton, established in 1761 when the Mudgett family arrived and was joined by the Gilman family. By 1769, there were enough school-age children in Lower Gilmanton for the residents to vote to raise 15 pounds to hire a teacher and build a schoolhouse. The schoolhouse was built of logs and located in a field that was later owned by a man named Charles Kelley. A few years later, the log schoolhouse in Kelley’s field was abandoned, and a new schoolhouse built of sawn lumber was constructed nearby, overlooking what today is called Schoolhouse Pond.

By 1778, families were settling the northern parts of Gilmanton and as the town grew, more one-room schoolhouses were built. At one time there were 18 schoolhouses in Gilmanton, and the taxpayers voted to divide the town into six school districts. District No. 1 would be in the thriving little village near Joshua Bean’s gristmill. The village had two blacksmiths, a doctor, a boarding house, a tavern with a stagecoach stop, and the one-room schoolhouse now known as Kelley Corner School. 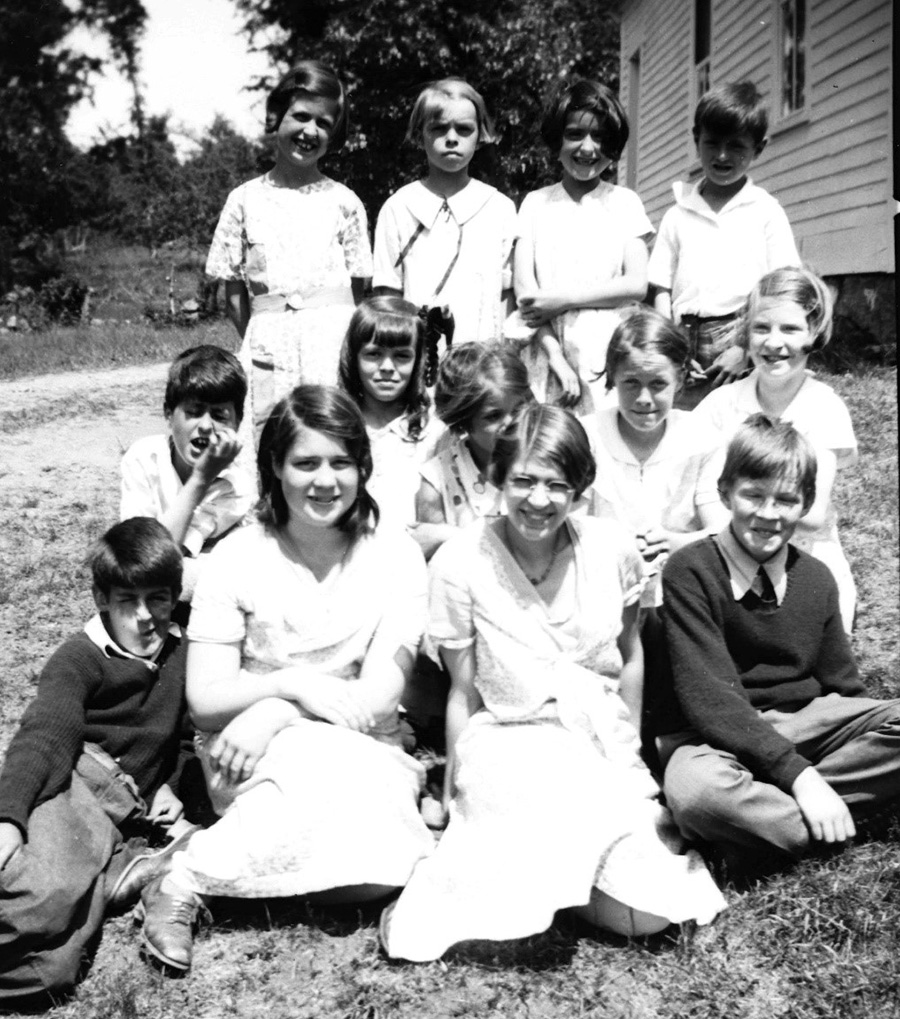 Students ready for summer on the last day of school in 1931.
Photo courtesy of the Lower Gilmanton Community Club

The name Kelley Corner comes from the Kelley families that lived nearby and the generations of Kelley children that attended this little schoolhouse. The school roster for 1901-1902 lists 26 students, and six of them had the last name Kelley, including a young Ruth Kelley, who was only 4 years and 10 months old. In 1933-34, school attendance was 12 students, six of whom were Kelley siblings.

In 1928, George Kelley started first grade at the Kelley Corner School, and years later he wrote about his experience:

“Kelley’s Corner School was one of the original six school houses established by the Town in 1778. Each of the school houses back then were one-room schools located so that no child had to walk more than two miles to school. Each was heated by a wood-burning stove; light was what came in the windows. Originally, the building had two windows on each side but while I was going there, a bank of six windows was installed in one end so ‘our light would come in over the left shoulder.’ Teachers were usually young and boarded in the community and often attracted a local husband. While the school could have grades 1 through 8 at one time, that was seldom the case, but still it must have been a challenge for the teacher. All supplies were furnished, even songbooks and a hand-cranked Victrola. I still marvel at how well we learned, not only when it was your turn but also when another grade was reciting …

“… It wasn’t all work; there were noon-hour and recesses, too. Except on bad days I walked home for lunch, but most of the kids brought a box lunch. Recess meant games in the front yard. With the pond nearby, we could ice skate at recess in season. Nearby slopes were great for sliding …

“… When I was old enough, I got to be the school janitor which meant arriving early and building a fire in the woodstove on cold mornings, sweeping the floor, and filling the water jug from a neighbor’s well.”

In 1949, after years of nonuse and minimal maintenance, the school district voted to lease the structure to the Lower Gilmanton Community Club. The LGC Club signed a lease that permitted it to use the building as a meeting house and in return assume responsibility for maintenance, repairs and renovations.

The old schoolhouse was used sporadically for meetings, strawberry festivals, bean suppers, dances and Halloween parties, but when members of the club began to age and weren’t replaced by new members, the activities tapered off and then stopped altogether. The Kelley Corner School went dark once again.

During this period when the building sat dormant, the school board was contacted by an individual interested in purchasing the old school and moving it onto private land. The school board floated the idea to the Gilmanton Historical Society, which strenuously objected. That objection was shared by enough members to inspire the revival of the Lower Gilmanton Community Club, which then embarked on a campaign to save the schoolhouse, make repairs, and keep it at Kelley Corner in Lower Gilmanton.

Time and nature had taken its toll on the historic building, and the revived Lower Gilmanton Community Club had to raise funds and tackle significant building repairs, including restoring the original chimney, repairing windows and fixing exterior wall damage.  In 2008, due to the club’s efforts, the building was placed onto the New Hampshire State Register of Historic Places. 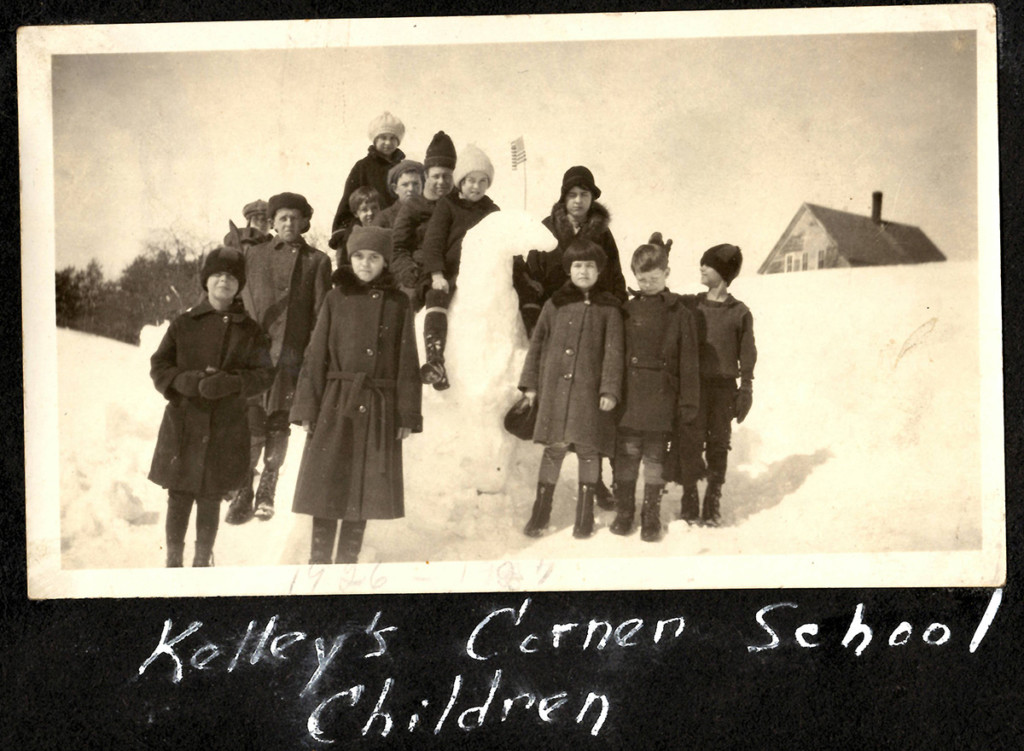 Kelley Corner School children in the winter of 1927.
Photo courtesy of the Lower Gilmanton Community Club

There are more repairs to be made, and the Lower Gilmanton Community Club, along with the Gilmanton School District and Historical Society, have plans to further restore the building and then use it to promote education and an awareness of Lower Gilmanton history. Gilmanton fourth-grade students regularly take a field trip to the Kelley Corner School while learning about New Hampshire history, and the LGC Club envisions a day when students will be able to attend a “day-in-the-life” program at the old schoolhouse and experience school as an earlier generation would have.

Club members have a collection of old documents and photographs taken decades ago when the school was in session. In their collection is a 1931 class photograph that includes a 10-year-old girl named Geraldine Eleanor Hawkins. There is also a 1935 report card for an eighth-grade boy named Donald Page Kelley. Could they be the culprits who wrote “G.E.H.” and “D.P.K” on the outhouse wall in 1936? Donald Kelley’s report card indicates that he averaged a “B” in drawing class and his teacher writes that he is “capable of doing much better work,” so it doesn’t seem likely that DPK proclaimed himself the “best artist of the world.” Maybe Geraldine Hawkins was the backhouse philosopher with an artistic talent and hidden ambition?

A special thank-you to the Lower Gilmanton Community Club members who contributed to this article.