Our own "What Do You Know?" writer is grooming the way for winter tourism 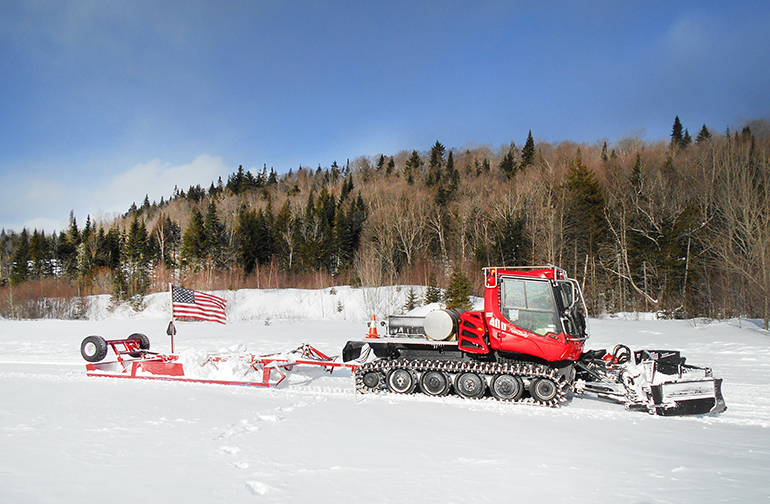 I’ve heard it said that tourism is the financial engine that drives the New Hampshire economy. If that’s true, then it’s probably fair to say that snowmobiling is the financial engine that drives winter tourism. Snowmobiling, in turn, is driven by the attractiveness of the well-maintained trails crisscrossing New Hampshire. The trails are maintained by a monster snow-moving machine called a groomer. The groomer, a bulldozer-like vehicle, is driven by a 400-horsepower Cummings diesel engine, which today is being driven by me. So, does that mean I’m driving the New Hampshire economy?

I snagged a ride aboard a Pittsburg Ridge Runners Snowmobile Club groomer. Most of my time was spent in the co-pilot seat, but I did take a turn driving the machine, moving snow around and filling in bare spots. I’m doing exactly the opposite of what the highway snowplow truck does. Whereas the snowplow driver is trying to push snow off the road before it gets packed down, I’m trying to scoop it onto the trail and pack it down.

The groomer is tracked like an army tank, so it steers by dragging the track on one side while the other continues to advance. This means it has a natural tendency to want to go straight, and when pulling a 40-foot drag it’s not highly maneuverable on sharp corners, but unlike a wheeled vehicle, it’s unstoppable in deep snow or on steep grades. The groomer provides the horsepower to tow the hydraulic drag over the trail, smoothing out washboard bumps and filling in ruts. This groomer also has a 10-foot snowplow blade on the front with hydraulic claws, which extend each end of the blade an additional 3 feet for funneling snow onto the trail. The joystick control lever has multiple buttons that rotate the blade in three directions, operate the claws, and raise and lower the hydraulics on the drag. The driver needs to be looking in multiple directions and performing several different functions all at the same time. An experienced operator makes it look easy. I’m making it look difficult.

New Hampshire has approximately 7,000 miles of snowmobile trails that wind through wooded valleys and rolling countryside in the southern part of the state, across wide vistas on the ice in the Lakes Region, over the hills in the majestic White Mountains, and into the North Country with its long snow season. It’s easy to see why the state is nationally recognized for its variety of terrain and wealth of ideal trails. The snowmobiler’s safety and enjoyment are enhanced by the well-groomed trails made suitable for riders of all experience levels. Good trails are not only desired by snowmobile riders, but also by the businesses that cater to them. Poorly groomed trails mean fewer riders and decreased business. 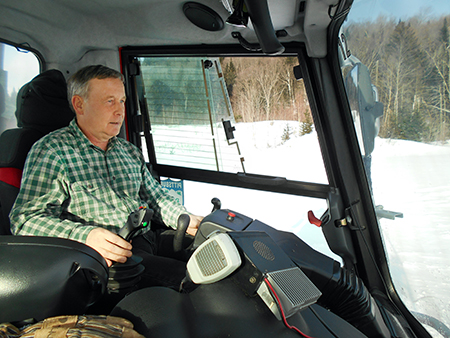 Writer Marshall Hudson at the wheel

A well-groomed trail can include establishing a snow base at the beginning of the season, reopening a trail after heavy snowfall has obliterated it, or reestablishing a worn and moguled trail. Trail grooming times, frequencies and methods are influenced by many variables including temperature, type and depth of snow, terrain, traffic volumes, storms, finances and availability of groomer operators. Decisions as to when, where and how much to groom are based upon the experience and judgment of the local trail manager, but must also follow guidelines by governmental program administrators who control the funding.

The state also spends more than $100,000 annually in fuel, equipment repairs, and staff time to operate its own fleet of groomers on trails in Franconia Notch, Berlin, Success, Conway, Evans Notch, Castle in the Clouds, Pillsbury State Park and Pisgah State Park. While there are trails on state-owned land that are maintained by the Bureau of Trails, most trails are on private land and are maintained by local snowmobile clubs. The local clubs are responsible for obtaining landowner permission and then operating and maintaining the trails based on the landowner’s wishes.

The Pittsburg Ridge Runners groom some 230 miles of trails in Pittsburg, Clarksville and the unincorporated township of Atkinson and Gilmanton Academy Grant. The groomer moves at 7 to 10 mph, usually at night when trail traffic is quieter, and covers 70 to 100 miles each shift. To meet trail condition demand, four groomers work every night, seven days a week from late December to early April. With breakdowns, routine maintenance, weather conditions, illnesses, etc., at times they are reduced to three groomers and the operators’ hours are extended, or additional shifts are added.

The Ridge Runners groomer I’m driving today is a 2015 PistenBully with a price tag new of about $280,000, and an additional $25,000 for the hydraulic drag I’m towing. That’s over $300,000 investment before even starting on any trail maintenance. Factor in fuel, insurance, operator salary, maintenance costs, etc., and then quadruple it for the four groomers that the Ridge Runners regularly run, and it quickly adds up to some significant budgeting challenges. Club membership dues, fundraisers, dinners, raffles, donations and sponsorships from area businesses make up the difference from what the Trails Bureau grants in financial aid.

Some people view snowmobiles as a noisy polluting waste of gas that disturbs the quiet stillness of a rural New Hampshire wilderness. To others it offers an exhilarating recreational opportunity during a season when many feel stuck indoors. Snowmobiling also offers a unique mobility to access areas of the state that you would otherwise never be able to see. Whether you like snowmobiles or hate them, their importance in the northern New Hampshire winter economy is significant. Small businesses rely on snowmobile sales, service, rentals and repairs for their winter livelihood. Visiting snowmobilers fill beds in motels and seats in restaurants, and purchase apparel, coffee, gas and groceries in small stores, pumping needed cash flow into the local economy.

When the New Hampshire economy is doing well because of snowmobiling, then I get the credit, because today I’m driving the groomer driving the economy.