Bill Burke discusses the degree of our Granite State snobbery 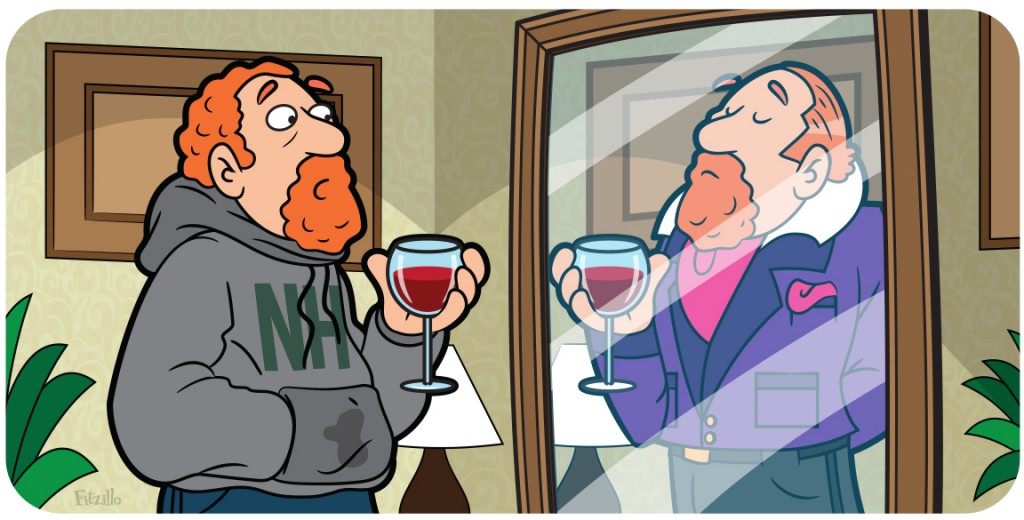 I’ve always thought of New Hampshire as a pretty down-to-earth place to live, grow and raise a family.

Turns out we’re lousy with Thurstons.

A survey by zippia.com recently named New Hampshire the fifth most snobby state in America. It weighed elements such as the presence of Ivy League colleges, people with an arts or humanities degree, and the number of wine bottles consumed per person. Not only did New Hampshire find itself in fifth place over all, the top 10 included Massachusetts, Vermont, Connecticut, Rhode Island and Maine. We’re in a cloister of conceit, apparently.

I refute this nonsensical conclusion. The boys down at the lab tallied up the number of yachts on Canobie Lake and came up with exactly none yachts.

Part of the survey’s reasoning is that New Hampshire consumes a “staggering 36.5 bottles of wine for every man, woman and child each year.” Confession: I do my part, so it might make sense to conduct a little self-examination to see if there’s been an inadvertent slide into pretension.

Why I’m maybe a snob:

• My name is William, which could sound rather haughty if it were followed up with “Howell III” or something, but since my middle name is different from my eponymously tagged father and grandfather, I missed out on that grandiose-sounding designation by less than a wafer-thin truffle shaving.

• As mentioned, I like to go to wineries. Sure, I’ll roll up in a convertible, but I’m in my 50s and I don’t make the rules.

• I went to Walt Disney World and ate charcuterie, which makes me very, very fancy.

Things that make me a not snob:

• One time I shot a chainsaw with a shotgun in a sandpit in Danville. It was maybe the manliest and least snobby thing I’ve ever done. And probably the dumbest. Also, there was a guy there that day who everyone kept calling “Felon.” Know why? Because he was a felon. Score one for not snobby.

• The winery thing, because trust me when I say this, is far from the snobby hobby it sounds like. There’s an Allman Brothers CD jammed in the stereo of that convertible we arrive in, and they are scientifically proven to be the least snobby band ever.

• If I have to go somewhere and I can’t arrive in sneakers and a hoodie, chances are I’m not going.

• I did not attend Dartmouth College. This is not a reflection on the institution, it’s just that that was never going to happen. And if it did, I would’ve told you by now (again, I don’t make the rules), and this bullet point would be on that other list.

• My definition of charcuterie is a chunk of Velveeta, a Ritz and a pickle.

Maybe touting my lack of sophistication isn’t exactly disproving our home state’s conceits, but I’m a riddle wrapped in a mystery inside of an empty nip someone chucked out the window when they drove by my house because that’s what we do here, apparently. If New Hampshire was really that snobby, they’d be flinging Simon Pearce snifters out the window instead.

We Granite Staters are not the pompous sort. Our patron saint is Adam Sandler — Kamen, bless his relaxed sartorial precedent — and I bet that airbrush T-shirt shop down the beach gets more foot traffic than Brooks Brothers. Sure, there’s an Ivy League school here, but those people tend to move away and create awesome sitcoms or start medical practices to treat dummies who take pot-shots at chainsaws in sandpits.

Now, with that settled, I’m off to propagate my ostentation of bespoke peacock butlers. La de da.