Neighbors have looked at the huge, boxy edifice for years without much thought, but the former St. Cecilia Hall has a new lease on life and a revived mission, thanks to Building on Hope

Ordinarily, when throngs gather in one of Manchester’s gritty inner city neighborhoods — scores of people spilling onto streets blocked off by police cruisers with their blue light bars ablaze — little good can come of the situation.

It was different in May, however, when a crowd came together to witness the unveiling of what has become known as the “Miracle on Beech Street.”

The onlookers, who offered a vivid cross-section of the Queen City’s remarkable diversity, had come to witness the social christening of a lovingly restored iconic structure — the former St. Cecilia Hall — that is now home to the Officer Michael Briggs Community Center and the Manchester Police Athletic League that has served more than 8,000 at-risk youth through the years.

The Lazarus-like transformation of the century-old structure came courtesy of Building on Hope, a New Hampshire-based group that works with non-profit organizations to renovate their facilities.

Building on Hope, however, is more than that.

“We are not a non-profit,” said Jonathan Halle, who served as co-chair of the project. “We are your neighbors. We are a catalyst for change, for hope, for something bigger than us.”

This was the fourth — and by far the biggest — project Building on Hope had ever taken on in New Hampshire, a six-month, $1.5-million behemoth of an endeavor that tested the creative energies, physical stamina and emotional capacity of all involved.

Tears flowed freely as the crowd was allowed into the building on a glorious Sunday in May. All of the police volunteers and all of the kids in the MPAL program had been barred from the building for the final four-day renovation blitz. It was a diabolical move by the Building on Hope crew, but it made the so-called “reveal” all the more meaningful. The transformation was nothing short of astounding, as the once drab interior was awash in light and color.

As the incumbent heart and soul and coordinator of the MPAL program, Officer John Levasseur is normally eager to regale visitors with tales regarding the benefits of the program, but even he — skilled boxer and rugged cop that he is — was reduced to a dazed smile for the first few minutes.

“We both wanted to be here for John because we knew how much this would mean to him,” said one of Levasseur’s sisters, Nicole Cowette, who reunited with another sister, Lisa Arpano, for the unveiling.

“He would call us every day throughout the project to tell us what was happening, and then they wouldn’t let him in the building those last four days,” Arpano said. “He was going crazy, so I drove up from Massachusetts and Nicole flew up from Florida just so we could see his reaction.”

The reaction of the kids as they quickly scattered throughout the premises? It was rapture run rampant. 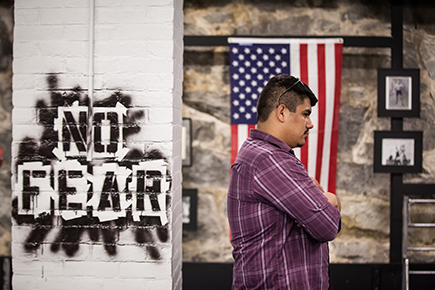 Within seconds of entering the basement-level boxing gym and workout center, the stutter of the speed bags lent a percussive backbeat to the buzz of excited voices as kids clambered aboard rowing machines; climbed ropes, peg boards and monkey bars; grappled with the heavy bag and shadow-boxed with friends inside the well-padded, blue vinyl ring.

The first sight of that renovated ring drew a gasp from 24-year-old Gibran Ortiz-Perez, who is an MPAL alum and volunteer boxing coach.

“I’m speechless. I have no words,” said Ortiz-Perez, who simply goes by the nickname “G.”

The boxing ring is what brought Ortiz-Perez to MPAL 11 years ago. He was 13 years old. Four of his brothers had recently been deported to Mexico. He was undocumented, he was struggling in school and he was growing tired of an unending New Hampshire winter when he first walked through the door.

“It changed his life,” said Eva Castillo, a member of the Manchester Police Commission who, on that day, preferred to introduce herself as the adoptive mother of Ortiz-Perez.

“He came here when Brian O’Keefe was in charge,” she added. “Brian knew his background, but he took him in and changed his life. No one in G’s family ever graduated from high school, but he did. Now he’s a college graduate, and he wants to be a Manchester police officer. That’s why I tell everyone about what MPAL can do.”

There were really two objectives in the enormous effort to reinvigorate the site. One was stated, the other unstated. 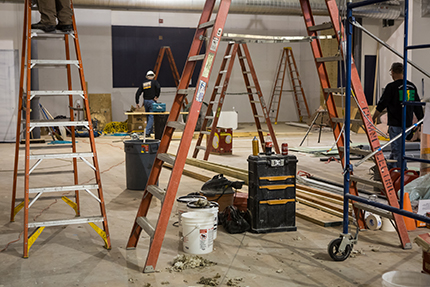 The renovation was much more than cosmetic — the project required a huge amount of construction.

One was to use an incredible pool of community resources — a parade of electricians, carpenters, plumbers, painters, roofers, floorers, sheet rockers, HVAC crews, interior designers and many more — to reimagine this space that has meant so much to so many young people in Manchester. Then there was the important subtext of honoring the memory of Michael Briggs, the Manchester police officer whose life was taken in 2006 while serving the city in which he was born.

That second element manifested itself in many ways throughout the project, but never so much as in the presence of Ted Hughes, 53, whose hardscrabble life brought him face to face with Michael Briggs on many occasions.

“Michael Briggs, I’d see him on the streets sometimes, and he’d always say to me, ‘Hey Ted, you staying out of trouble?’” Hughes recalled. “He knew about me being arrested a bunch of times, but he always asked me how I was doing, was I working, stuff like that.”

Hughes works with a temp agency called On Demand Staffing Solutions. He goes where they tell him, and, back in April, they told him to help out with the Building on Hope project.

“I was just a grunt man, mostly,” he said. “I helped the painters, cleaned the boxing gym and moved the weights, and, the whole time, I kept thinking of Michael Briggs. I used to think I hated cops, but, after I got to meet him, he impressed me. I was proud to work here.” 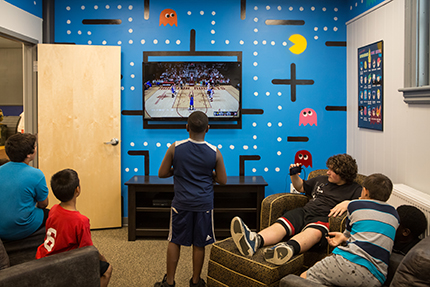 For all of the brawn that was required to complete the project, there were delicate riffs as well, as interior design volunteers employed deft touches to bring form and function to the previously unattractive and underutilized community center on the building’s upper level.

The facility now includes a study room and game room crafted by Debbie McLaughlin of Deb’s Décor, where kids can play chess or shuffleboard or Xbox on a flat screen, both courtesy of Walmart. Truth be told, Debbie — a former teacher at the Beech Street School — would rather see the kids use of one of the six laptops donated by Manchester high-tech firm Dyn.

Aimee Brothers from Lavender & Lotus Interior Design turned her hand to the judo/aikido coaches’ office. Both coaches, Robert Proksa and Michael Hovan, are friends of hers, which made her task all the more rewarding.

“Since they share the space,” she said, “one key element was a traditional Japanese folding screen — a gift from one coach to the other — that divides the room but also helps introduce a Zen quality.”

Sublime design touches like that were in abundance, but it was hard to top Kate Whalen from JRL Studio, whose mission was to renovate the Spartan office of John Levasseur.

“When I first went in, I talked to John and asked what his needs were for the space,” she explained, “but being the kind of guy he is — the needs of the kids are so much more important to him — all he said he wanted was a clean place to work and some storage space.”

It took until 10:30 on the Saturday night before the reveal, but when Kate was finished, the office was ready for its self-confessed OCD occupant, right down to the two gluten-free burritos in the freezer of the new office mini-fridge, which Kate had lovingly salvaged from his old office fridge.

On that day, every designer had a story and every kid had a smile, but, during the formal remarks that preceded the reveal, everyone with a soul had to admit they had a catch in their throats.

US Sen. Kelly Ayotte came to the event with a flag that had flown over the United State Capitol Building. She presented it to Manchester Police Chief Nick Willard, who stood alongside Maryann and Lee Briggs, parents of the slain officer whose name graces the building. 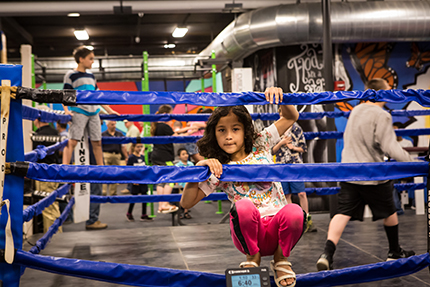 Local kids try out the boxing ring, one of the few original pieces of equipment still left at the refurbished center.

The saga of police courage and sacrifice was about to play out yet again, when the chief quickly called another officer to the fore.

Officer Ryan Hardy came forward in civilian clothes. Just nine days earlier, he was shot twice in the line of duty. He had bandages on his shoulder, neck and cheek, and, with his young son at his side, he accepted the flag from the chief, who returned to the microphone.

“Ryan, you embody everything that Mike Briggs was,” Willard said, his emotions beginning to surface. “You know, Mike could have gone home that night. His shift was over, but he chose to catch the bad guys and patrol on. Like him, in the worst moment of your life, your only concern was for your fellow officers as you radioed a description of the shooter.

“I will now ask Ryan to present the flag to John Levasseur, and shall it forever fly over this PAL building.”

As the applause swelled, it was clear that it was intended for Michael Briggs and Ryan Hardy and MPAL lifers like former Chief David Mara and Lt. Brian O’Keefe and the retired Dr. Jeffrey Czarnec, who founded the program in Manchester some 25 years ago. At the same time, the Building on Hope volunteers who gave so much to this project could listen to that applause and take joy in knowing that, for cops and kids alike, things like duty, honor and pride abide in that place.

*See photos from the reveal day, during construction and some before and after shots at the end of the story.