Brave Hurt: How NOT to Win the New Hampshire Highland Games

Ever wanted to try your hand at tossing a caber or hurling a haggis? Our man on the scene Kevin (Mac)Flynn shows how not to do it. 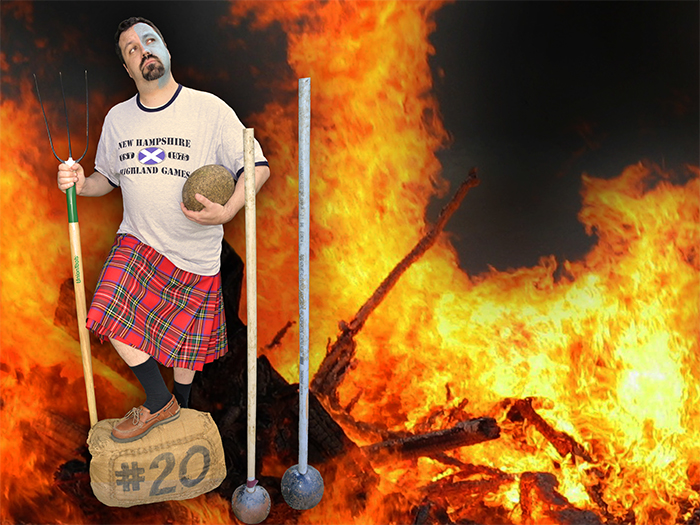 Scotland has contributed to world culture like no other nation. It has given civilization single malt Scotch, the Scottish terrier, Scotland Yard, double malt Scotch, Scotty from “Star Trek,” Scotch-brand magic tape and Scotch. There is also haggis and Gordon Ramsay, two things that are only really related in that fact that Scotland should apologize for both.

Annually in New Hampshire, we get to see a side of Scottish culture that goes beyond tartans and bagpipes. The New Hampshire Highland Games, a world-class level competition of Scottish “heavy athletics,” has mesmerized attendees with feats of strength, agility, brawn and utter pointlessness.

The Highland Games are not merely a sporting event. It’s an entire three-day festival at Loon Mountain, celebrating the food, music and customs of a proud, primitive culture from days gone by. It’s just like NASCAR.

Though people often assume their Greco-Roman origins, most of the “field” events in today’s track and field are derived from Scottish Highland Games. Contests such as the shot put, the hammer throw and the pole vault were brought to the modern Olympiad by the British, who — with no sense of irony or history — “acquired” the games and claimed them for their own.

For those of us who’ve witnessed the Scottish heavy athletics, we are often left with the sensation of “What the hell did I just watch?”

To help me demystify what all this heaving and hoeing is about, I trained with Highland Gamer Bill Crawford of Concord. In addition to being a Scottish athlete, he’s a physician — as having a medical degree really comes in handy when launching tree trunks from the palm of your hand.

“I grew up playing football and wrestling, but to my family it wasn’t the Scottish games,” says Crawford. He’s traveled around the world in order to prove his mettle by hucking rocks and cannon ball-sized weights. At one event, Crawford dislocated his shoulder during warm-ups. He instructed his 11-year-old son, Billy, how to pop the shoulder back into place. Crawford went on to compete, even winning some of the individual events. After his display of perseverance and grit, he asked his son if he learned anything.

Highland Games are a hexathlon of events whose origins date back to Medieval Scotland. Fighting men would demonstrate acts of strength in order to join a clan. They did things like lifting big stones and then it progressed to throwing rocks, blacksmith’s hammers, lumber — basically anything they could get their hands on. This is due to the fact there were no Sports Authoritys in Medieval Scotland. The evidence strongly suggests the Highland Games were invented due to boredom and alcohol.

(Now, I’m not sure why I was chosen for this assignment. Although the Scots and the Irish enjoy a common Gaelic ancestry, we’re not exactly BFFs. To me, Irish heavy athletics includes carrying home some guy named “Fitzy” and step dancing with our hands down by our sides like the Good Lord intended.)

One of the first events Crawford taught me was the Braemar Stone Toss. He told me to place the 16-pound stone under my chin — like an incredibly hard and uncomfortable pillow — twist my torso and then heave it into the air like punching a giant in the nose. (If you’ve ever heard the term a “stone’s throw away” for a location, in my case that location is only about 37 inches in front of you.) 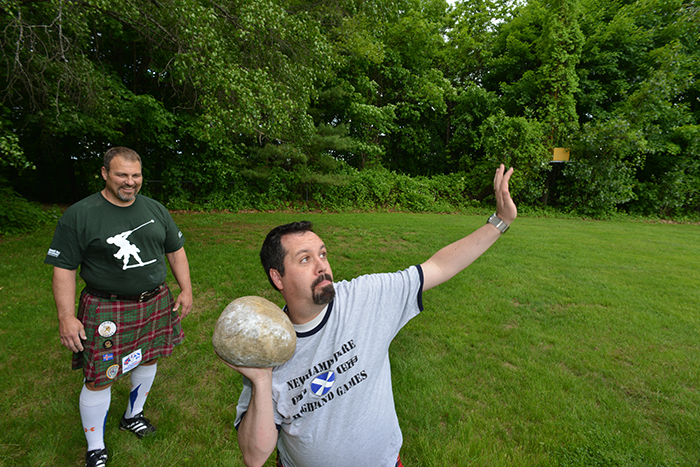 The Braemar Stone Toss started with an oomph for Kevin Flynn … 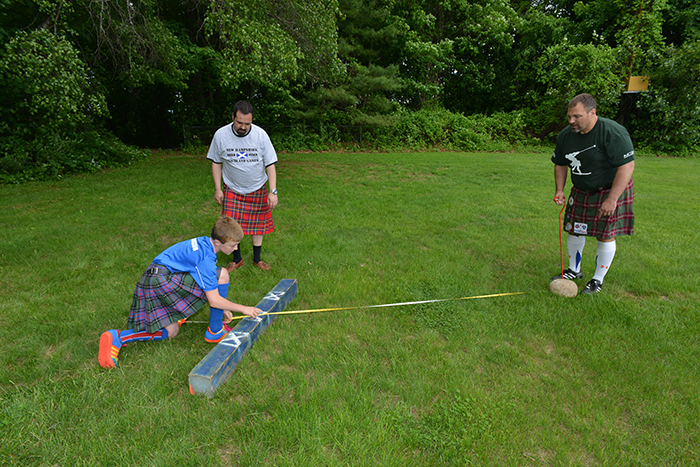 Next up was throwing a steel weight for distance. The weight was attached to a handle and chain. The trick is in the wind-up: to perfect a smooth heel-over-foot body spin that maximizes the growing inertia of the accelerating weight. Another trick is letting go of the handle, which was a finer point that Crawford forgot to mention to me. 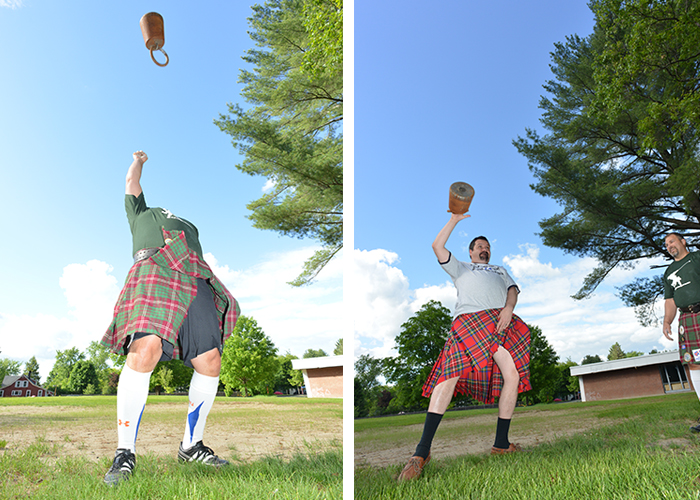 Another distance competition is the Hammer Throw. Unlike in track and field, this is an actual hammer. Or at the very least, a metal ball fused into a four-foot plastic handle to look like a hammer. The technique is to rotate the hammer over your head like David Ortiz at the plate, then let it fly from your hands behind your back like a Jerry Lewis sight gag. The throw works best when saying a quick prayer of contrition for injuring any spectators lined up behind you. I’m not saying this event is “hazardous,” but the field of play has an area literally called “the kill zone” for errant hammers. 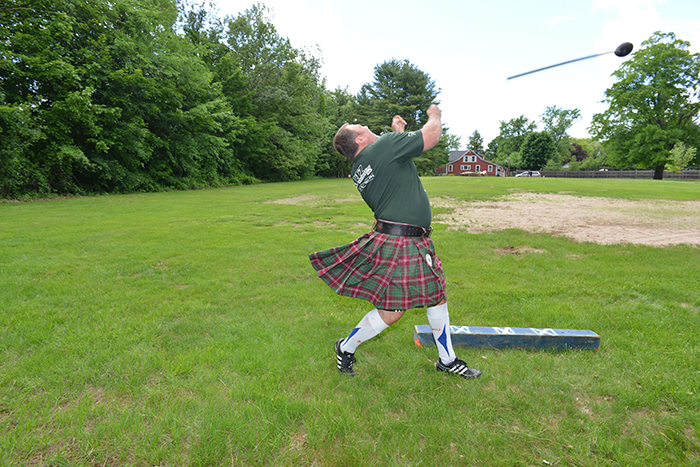 Standard weights for the hammer throw are 16 and 22 pounds for the men, and 12 and 16 pounds for the women. According to the rules as posted on scottishheavyathletics.com, The hammer shall be thrown in a standing style. Although some movement of the feet prior to the release is allowed, there shall be no approach and the competitor is not allowed to spin the body. Here, Crawford demonstrates what to do and below … 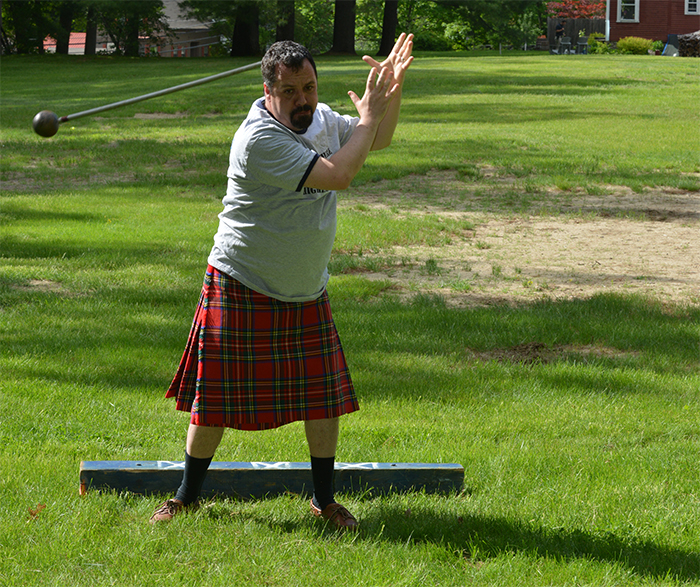 After throwing heavy things for long distances, athletes also must demonstrate their power by throwing heavy things in the air. In a weight-for-height event called Weight for Height, Crawford demonstrated how to fling a 54-pound metal weight in the air, backwards and over a pole. The pole is raised with each successive toss. The technique is similar to swinging up a gallon jug of milk on the kitchen counter while unloading the groceries. The only difference is the jug would have to contain 6 ½ gallons of milk.

Maybe it was seeing too many Wile E. Coyote cartoons as a kid, but something about throwing a hand-held anvil straight up in the air while standing beneath it raised some red flags for me.

Next up in these farmer Olympics was the Sheaf Toss. Contestants use a three-pronged pitchfork to heave a 20-pound bag of hay up over the pole. There is — and I’m not making this up — “controversy” in the Scottish heavy athletic community about whether or not using a two-pronged pitchfork is cheating, as it provides less friction on the bag. There is also some question as to whether the origins of this event are authentically Scottish. I, however, imagine the game was created by some enterprising older brother who devised it in a Tom-Sawyer-isn’t-it-fun-to-paint-the-fence?-type of barn prank to play on a younger sibling. 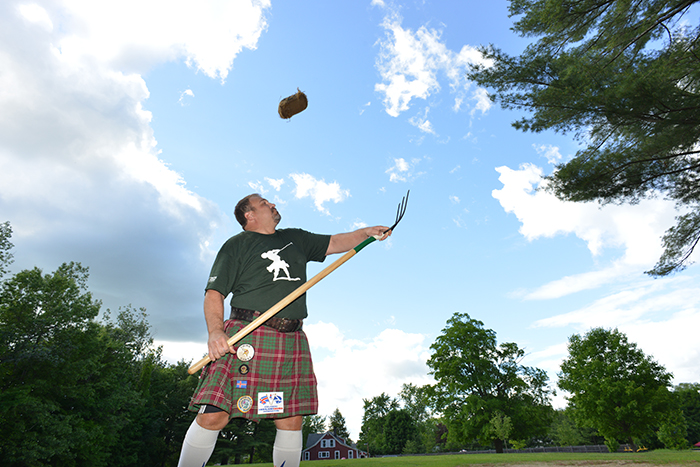 Rules of the Sheaf Toss state that any style of tossing may be used that is deemed safe by the judges. The Sheaf Toss is a good example of the practical side of the Scottish Heavy Athletics since tossing hay into the air was thought to absorb humidity and prevent foul weather that might cause bagpipes to go out of tune and cause permanent ear damage. 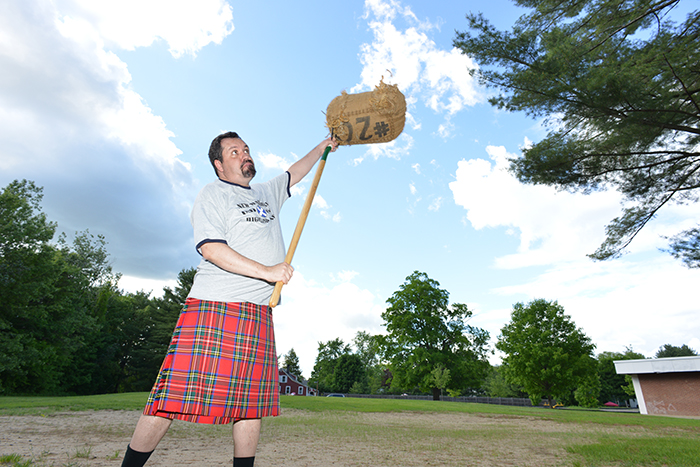 The signature Highland Games event is the Caber Toss. This is the competition in which participants pick up and run with a 20-foot-tall, 175-pound larch tree, then flip it in the air.

Below, Crawford demonstrates a perfect toss of the caber. By the way, when not kilted, our brawny instructor has a whole other side to him. His day job is as a hospitalist (a doctor who works exclusively in a hospital) at Concord Hospital. He’s been tending to patients there since 2004. His impressive background includes a degree from New York Medical College, a surgical residency at Lahey Clinic and a family medicine residency at Dartmouth-Hitchcock Hospital.

The caber (Scottish Gaelic for “pole”) is slightly tapered and rounded at the bottom so the contestant can cup his hands beneath it. Due to the unique nature of the equipment, there are no standardized specifications to a caber. Neither Spaulding nor Nike make equipment like cabers or Braemar stones. Crawford and other athletes use rocks and lumber they’ve harvested just “looking around” riverbeds, forests and the like. Can you imagine Tom Brady going to a farm to select which hog to make his “pigskin” out of?

Did you know NH has an official state tartan? It was adopted in May 1995.

Each of the colors illustrates the wonder of the state of New Hampshire. Green for the abundant forests. Purple for the State Flower, the Lilac, and the State Bird, the Purple Finch. Blue (where purple and green weave together) is for the crystal lakes, rivers and streams. Red for the sacrifices of those who keep us free. White for the snow-capped White Mountains and black for the mighty granite for which we are famous.

The New Hampshire Highland Games have a reputation among athletes as having heavy cabers, which range in weight between “hernia-inducing” to “small colon-expelling.”

In the event, competitors first lift and run with the vertical caber in a manner that  says, “Oh my God, I must be insane for holding this gargantuan pole and I better get rid of it as if it were a mammoth stick of burning dynamite and I am the cat from ‘Tom and Jerry.’”

Surprisingly to the uninitiated, the toss is not a distance event, but one of accuracy. After making one rotation in the air, the caber must land parallel to the target (think of a minute hand pointing straight up at 12:00). Points are deducted if the angle is off — say pointing more to 11:00 to 1:00. It’s essentially a giant game of Scottish darts.

I tried lifting the caber, and after I stopped crying I did help Crawford carry the pole off the practice field. “Careful,” he says, “I’ve seen more people break their collar bone from carrying the caber on their shoulder than from throwing it.” This was about as comforting as learning lightning kills more people than shark attacks do.

As far as I have been able to discern, the Caber Toss has no practical application in real life. Unless you work for the telephone company.

The events of the Highland Games, though rudimentary, are actually examples of pure athletic prowess and fitness. They are fascinating and fun to watch, especially when you recognize their DNA in modern sports played from high school to the Olympics. It’s also a treat that New Hampshire hosts one of the few world-level competitions for international athletes. Also — and maybe this is all the Percocet talking — but the events are much more fun to watch than actually participate in.

Meantime, while nursing the aches and pains of training for Scottish heavy athletics, I think my next attempt will be at that other sport invented in Scotland: golf!

Take the High Road to the Highlands 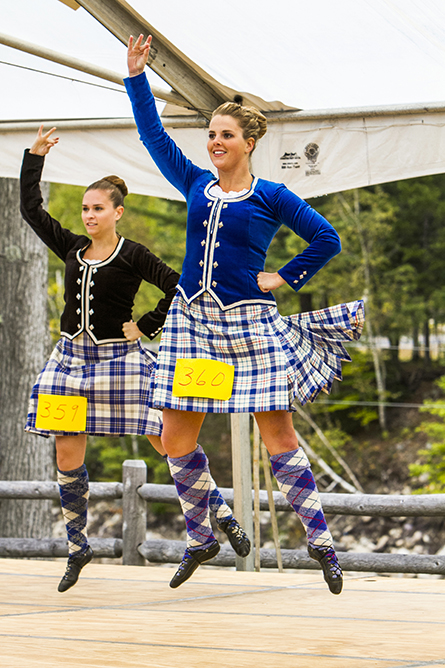 While the exotic athletic competitions are what most people recall when thinking of the NH Highland Games, the event is much more than just big men throwing around heavy objects. The sprawling gathering is for the whole family — whether they hail from Scotland or not.

The festival boasts many non-athletic contests, including Scottish dancing, bagpiping, fiddle, harp, drumming and band competitions. There’s also an obstacle course for sheepdogs and their herds.

There are four entertainment venues featuring a variety of music — from traditional Scottish tunes to tribal-like drum circles to the pipe-and-pop fusion genre known as “bag rock.”

The Clan Village features displays from more than 70 clans. Explore where your Scottish ancestors came from and maybe grab something featuring your family’s tartan.

More than 40 vendors offer festival-goers an assortment of themed items, ranging from piping supplies to kilts. Kids can listen to ancient Scottish fables, have their faces painted Braveheart-style or create their own replica shields and weapons.

Taste the flavor of the nation with fish and chips, Scottish meat pies or that quintessential dish, haggis.