Behind the Curtain: North Country Center for the Arts at Jean’s Playhouse 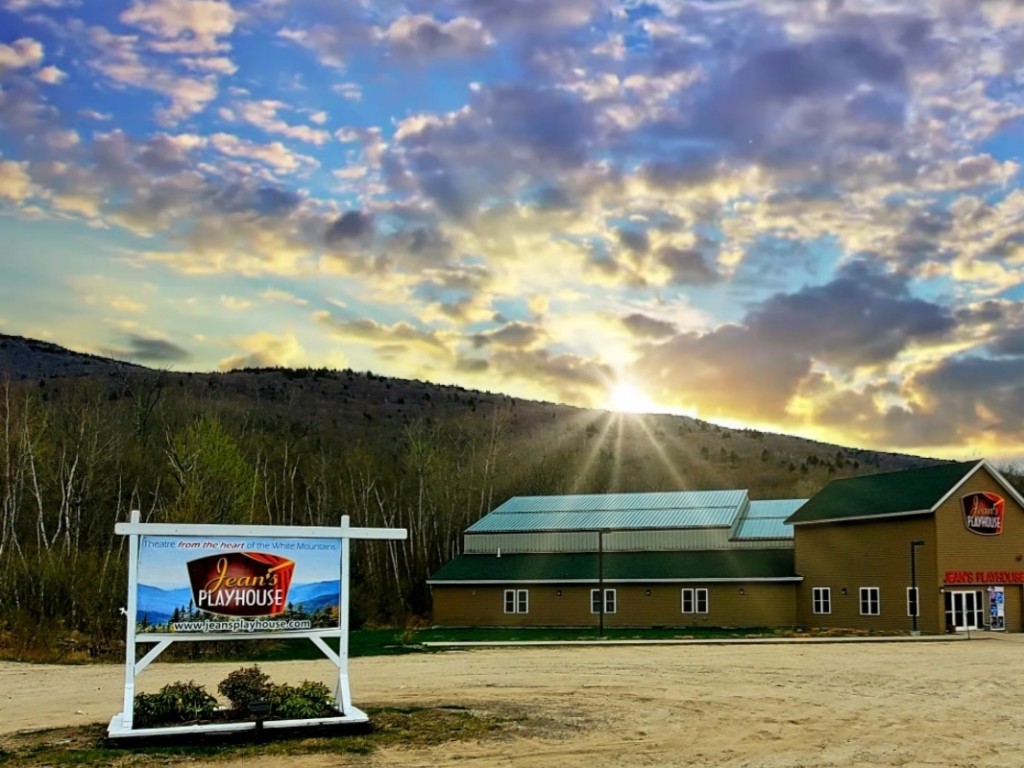 For our latest profile, check out North Country Center for the Arts at Jean’s Playhouse in Lincoln. We spoke to producing Artistic Director Joel Mercier to learn more about the playhouse’s award-winning summer plays and musicals, their off-season presenting acts and their youth education programming. Read on to learn all about their vision of being “a premier center for the arts from the heart of the White Mountains.”

Tell us about the history of your theater.
Joel Mercier: “The North Country Center for the Arts started as a children’s theater festival under a tent back in 1986. From there, the company developed into a 501(c)3 nonprofit and built its home in a closed paper mill factory, where it became known for its touring children’s theater as well as professional summer stock productions.

Over more than two decades, the Papermill Theatre would perform over 80 professional productions in the historic paper mill building and establish a reputation for excellence, winning many New Hampshire Theatre Awards and becoming a vibrant center for the arts in New Hampshire and New England.

After years of success, NCCA played its final summer season in the Papermill Theatre in 2009, due to the age and deterioration of the building. That fall, the paper mill was demolished, making way for a new facility, Jean’s Playhouse, which would house the NCCA and expand programming beyond just the summer. Opening in 2012, Jean’s Playhouse has picked up the tradition of award-winning professional summer theater, the touring children’s theater that started it all back in 1986, as well as adding youth education programming, and fall and winter entertainment, including comedians, cover bands, films and holiday productions. You can read more of our story here.”

What makes your venue special or different?
Joel: “NCCA at Jean’s Playhouse is the best of both worlds! Not only do we have a producing summer stock season, we are also open in the fall and spring in order to present acts from all over New England. We cater to our loyal local base, but also to the thousands of second homeowners and vacationers who have turned the town of Lincoln into a major resort destination. From the industry perspective, NCCA provides opportunities to bridge the gap between educational and professional theater by hiring young emerging artists and pairing them with established directors and designers and guest artists in order to create quality entertainment, but also an educational experience for all involved.”

What’s the story behind the name of your theater?
Joel: “Our official name has and always will be the North Country Center for the Arts, as we always envisioned ourselves a center of culture for the North Country community. However, we are also known by the name of our venue, Jean’s Playhouse, which was named after Bill and Jean Hallager, the incredible and generous benefactors who spearheaded the creation of Jean’s Playhouse when the Papermill Theatre was no longer a suitable venue for us.”

What are you best known for?
Joel: “We are known for high-quality Broadway-style musicals and plays in the summer, but we are also known for our comedians and bands in the fall and spring, and many families all over the Granite State who can’t make it up to Lincoln know us because of our touring children’s theater, the IMPACT program, which travels to Lancaster, Franconia, Plymouth, North Conway, Concord, Claremont and Plainfield on a weekly basis in the summer, bringing a new musical fairytale each week.”

Tell us about the most memorable play you’ve done.
Joel: “There are so many, it’s tough to pick one, but here’s a recent story that sticks with us. In 2019, we produced ‘Titanic the Musical,’ which is a beautiful play that introduces the audience to the people who were on the ship. A look into the lives of the first-, second- and third-class passengers and staff, coupled with gorgeous music, creates a piece of theater that truly tugs at the heartstrings. The audiences really responded and loved the show.

During those three weeks, we heard from at least a dozen patrons who had a family member on the Titanic, but one story in particular really stuck out. Once night, a woman told us at intermission that her great-great-grandfather was a survivor of the Titanic. Knowing the story and how few men escaped, we asked if he was a first-class passenger or a staff member? She answered no, he was in third class, but he knew how to row a boat, so he was allowed onto one of the rescue boats in order to row the first-class women to safety. In fact, there was a pregnant woman on his boat who was shivering and he took his coat off and gave it to her. She turned out to be Madeleine Astor. In the musical, Mrs. Astor is indeed a (pregnant) character, and there is a story line where a third-class passenger gets saved because he was able to row. But that part of the story was in Act II, so this patron hadn’t seen that part yet. We have no idea if it was just coincidence or not, but it gave us chills!”

Tell us about what you have been up to this season. Do you have anything exciting planned for 2021?
Joel: “2020 was certainly a challenge. We had planned a wonderful season, including ‘Mamma Mia!’ and the professional area premiere of ‘The Hunchback of Notre Dame.’ However, we had to cancel the season out of safety concerns and state restrictions. We were able to bring in a few comedians and cover bands and dip our toe into ‘Covid Producing,’ which helped prepare us for 2021. We mostly used the time to clean, repair and reorganize our building, catch up on administrative duties, overhaul our box office software, and we did dabble in some online producing as well. We took our original annual holiday musical, ‘A White Mountains Christmas,’ and reimagined it into four short videos that were released each Monday of December leading up to Christmas. We chose not to charge for viewing, but to think of it as a Christmas gift to our community and a way of spreading holiday cheer!

We are re-opening for 2021, and we couldn’t be more excited! While ‘Mamma Mia!’ and ‘Hunchback’ will have to wait until 2022, we have come up with a terrific season of shows, both indoors and out, which we think will be an appealing and entertaining return to live — and safe — theater. We will be producing three smaller musicals in our theater, ‘Clue the Musical,’ ‘Evita’ and ‘Forever Plaid,’ which will be performed by a small company of between four and 11 actors, and a reduced technical staff.

Our company will be regularly tested and isolated to ensure their safety, as well as the safety of our patrons and volunteers. Our IMPACT program will once again tour throughout New Hampshire, producing musical fairytales each week. We are working closely with each venue to ensure that proper distancing and safety measures are in place.

As excited as we are about these shows, we are even more excited about our opening summer project. In order to provide entertainment to our patrons who are not yet ready to be inside, we are teaming up with Loon Mountain to create an outdoor concert version of the Rodgers & Hammerstein Classic ‘The Sound of Music,’ which will utilize the natural, beautiful settings of our area as its backdrop. The hills of Loon will truly come alive with ‘The Sound of Music,’ and we can’t wait for this special weekend event! You can watch our season announcement here.”

What keeps you passionate about doing what you do?
Joel: “Our work matters to a lot of people. Being closed for a year has been a huge reminder of that. We get messages from our patrons telling us how much they miss our shows and that means the world to us. Last summer, we launched a fundraising drive called ‘Just the Ticket’ where we asked patrons to help by donating the cost of a ticket we were not able to sell because of COVID-19. As a thank you, we had donors send in a photo of themselves and we put their pictures all over the seats they donated, and we also gave them access to an exclusive Alumni Video. We were overwhelmed at how willing our alumni were to help us out with this video. They told wonderful stories about their time with us. One of the actors had just gotten engaged to the stage manager he met at our theater, and another had been cast in his first Broadway show, a brand new musical he heard about through one of his cast mates during a summer with us. Reconnecting with our alumni and seeing where their lives had taken them, and how they attributed some of their success to their time at NCCA, was a really emotional and wonderful reminder that we make a difference in the lives of these young performers every year.”

How can people best support you right now?
Joel: “There are two ways. One is to donate. We probably sound like a broken record, but donations are down this year for obvious reasons, and as a nonprofit, ticket sales only cover about half of our costs. The other thing people can do is just come see our shows! The theater industry is hopeful, but understandably concerned, that attendance will be low this year and we want nothing more than to entertain you. We need that boost in morale and we need the income. Buy a ticket and come see a show. COVID-19 policies are in place for the safety of our patrons, staff and volunteers. Parties will be social distanced from each other, and our performers are tested and isolated from risk. Most theaters in New Hampshire are restricted to about 25 to 30% of their usual occupancy; however, last summer and fall, most theaters were not even able to fill those seats due to lack of public confidence. We hope this year will be better with news of the vaccine and the in-depth safety precautions theaters are taking, but there is still of course a concern. Please come see some wonderful theater this summer!”