Back to the Drawing Board

Writer, photographer and media consultant Rob Burbank has made a living communicating about the White Mountains for more than three decades, as a news reporter, editor and media relations professional. He has heard, read or written more than a few stories about grand plans that didn’t quite make it off the drawing board, for one reason or another. While hardly a comprehensive list, here are a few noteworthy examples of such big ideas. 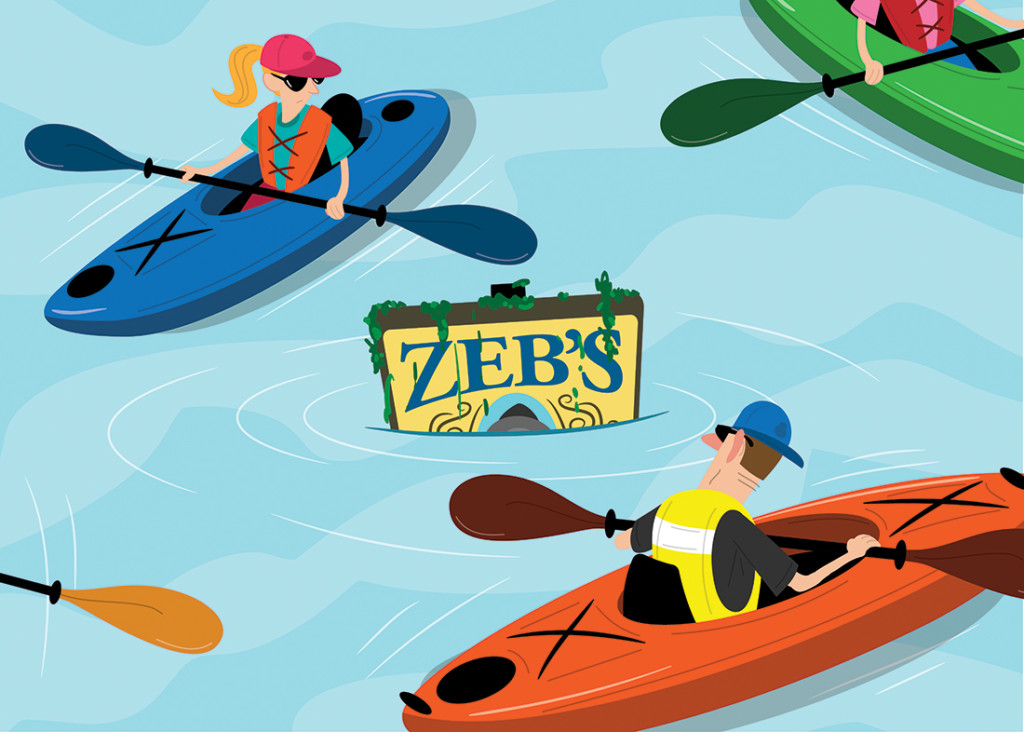 The great flood that wasn’t

It seemed like a good idea at the time.

But more than a couple of once-good Granite State ideas never made it past the field trial stage, or the drawing board, for that matter.

I wrote about one for The Mt. Washington Valley Mountain Ear newspaper back in the late 1980s. The plan for expanding Echo Lake State Park — which definitely made the drawing board stage, including extensive engineering drawings inked in 1962 by Boston consulting firm Chas. T. Main — called for damming the Saco River downstream of North Conway Village, and drowning thousands of acres of farm, forest, marsh and pasture land, plus a marina, a resort with more than 400 house lots, and a golf course. This was all to create a lake that would have essentially stretched from the base of the Moat Mountain Range to the back door of the Eastern Slope Inn in the heart of the village.

A public meeting to consider the plan showed 69 people favored dropping the study, while 155 wanted it to continue. But it went nowhere. Residents on both sides of the issue with whom I talked in 1989 confirmed that the idea was “quietly shelved” and “just petered out.” The late Peter Pinkham, owner of the Eastern Slope Inn at the time of the study and a proponent of the lake proposal, noted, “a different turn, and it might have been the Lakes Region.” 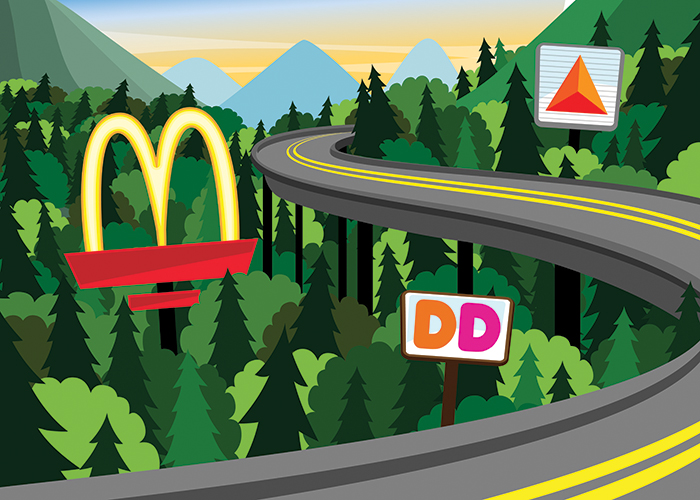 Get your Dunks before you go

The Kancamagus Highway, an official National Scenic Byway linking the towns of Lincoln and Conway across 34 miles and some of the White Mountain National Forest’s more memorable landscapes, was a gravel track that dead-ended on both sides for generations before the connection was made and the road opened for its entire length in 1959. End-to-end paving was completed in 1964.

Engineering feats aplenty were employed to create the serpentine highway that never had more than one “n” in its name, though countless numbers of its travelers have insisted on inserting a second. It’s named for Kancamagus, 17th-century Native American leader of the Penacook Confederacy, and the pronunciation of his name, and the road’s, is Kan-ka-MAU-gus.

So taken was he by the natural beauty of the area, the landscape architect who designed many of the road’s popular scenic outlooks and campgrounds wrote in a preliminary report to the US Forest Service in early 1957: “It is my considered opinion that this area should now and forever be assured against any taint of commercialism and be insured as a wilderness area.”

Recommended features did include an automobile service station, restaurant and lodging facility at the height of land at Kancamagus Pass. (This was, after all, the automobile age. And it was noted that the structure and services should not intrude on natural surroundings.) It is one suggestion that was not heeded, which is why, today, you can enjoy stellar scenery along the Kanc, but you can’t get fries with that. 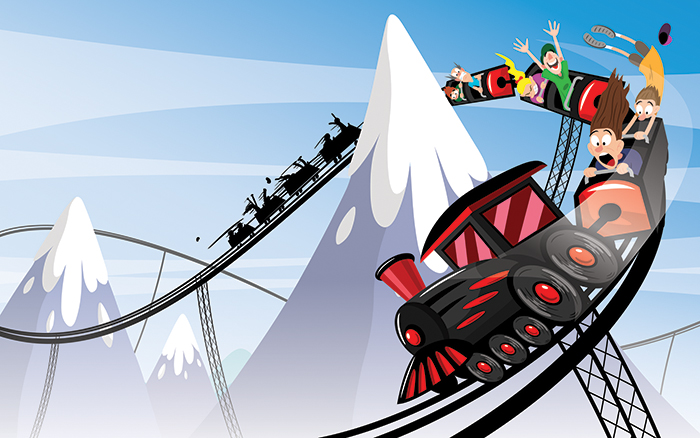 Even further back, an ultimately ill-fated plan to build an electric railway across the spine of the Presidential Range in the White Mountains was proposed. And why not? It was 1910, and much of the populace was enamored of new technology. The Mount Washington Cog Railway had been scaling the Northeast’s tallest peak for more than 40 years. A carriage road — later the Auto road, dubbed “America’s oldest manmade tourist attraction” — had been ascending the mountain on its eastern side for even longer. Surely, there was a place for a new electrical conveyance to allow visitors to enjoy the rarified air and bird’s-eye views from the highest points in the Northeast.

Steve Smith, today a prolific author and proprietor of The Mountain Wanderer Map & Book Store in Lincoln, filed a feature story on the proposed railway with The Mountain Ear in the late 1990s, referencing the journal Appalachia and other sources. Officials of the Boston & Maine Railroad forwarded the idea of a mountain-climbing electric trolley that would scale Mount Jefferson and traverse the Ridge of the Caps, cross the western slopes of Mounts Jefferson and Clay, “skirting the Lakes of the Clouds and the headwall of Tuckerman Ravine,” Smith wrote, and wind around the summit cone of Mount Washington. The plan included a new hotel on the summit to replace the one lost to fire in 1908.

Survey work was performed for “The Mount Washington and Great Range Railway,” and, it’s said, holes drilled in mountainside boulders as part of that fieldwork can still be found. The local press largely heralded the idea, while some conservationists opposed it. In any case, the line was never built. By 1913, wrote Smith, economic forces, including a New England recession, collapse of the B&M, and the necessary transfer of land to the federal government for the route’s inclusion in the newly created White Mountain National Forest spelled the end for electrified transport on the Presidential Range.

Recently, Smith told me of a 1930s-era proposal to create an above-treeline highway in the Presidentials as “a sort of Presidential Skyline Drive.” That didn’t go anywhere either. 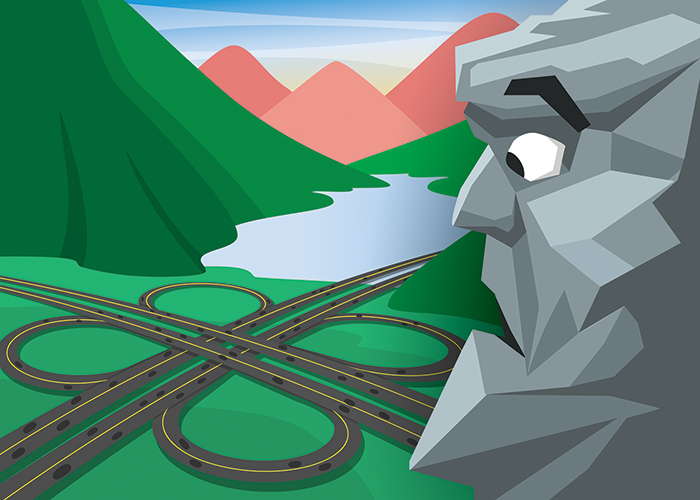 Transportation has had a role in additional schemes, including the plan in the 1970s to cram a four-lane highway through scenic and iconic Franconia Notch State Park. As the nation’s interstate system expanded, its asphalt ribbons crept north, threatening to transform the rugged environs of the Old Man of the Mountain into an unrecognizable stretch of automotive sprawl. Sure, Americans loved their cars, and growing tourism numbers showed they loved using their cars to access New Hampshire and its breathtaking views. But if a highway project marred those views or, worse yet, if the rumble of dump trucks and road rollers were to rattle the Old Man from his perch, where, then, would we be?

Nothing less than the character of the White Mountains was at stake, and tourism supporters, conservation advocates, including the Society for the Protection of New Hampshire Forests and the Appalachian Mountain Club, and other concerned citizens, called for a better solution; one that would help move traffic along while conserving the natural resources for which the Notch was protected as far back as 1928.

The result was the Franconia Notch Parkway, a workable solution arrived at following extensive negotiations between those user groups and state and federal agencies. Today, the parkway is seen as a signature public works project that has done its job well, though at a lower engineering standard. The 8-mile stretch of I-93 through Franconia Notch contains a 3-mile segment carrying just two lanes of traffic — the only such piece of roadway in the entire Interstate system. (That’s 46,876 miles and counting.) 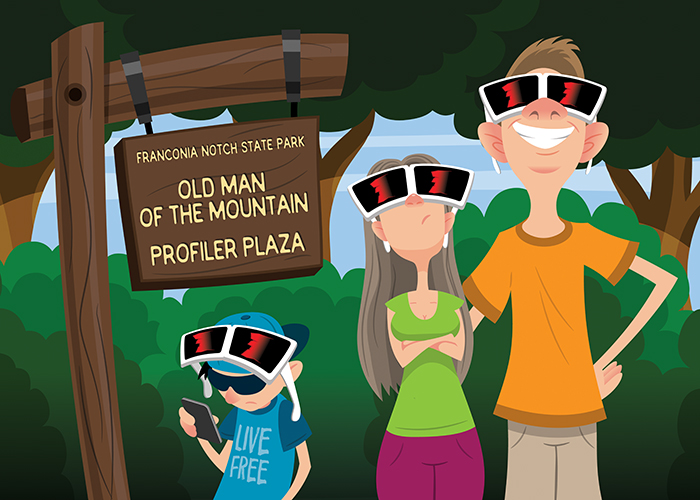 Ultimately, though, the Old Man did fall. Despite careful and caring maintenance and repair to the distinctive rock formation, the forces of age, weather and gravity led to the Old Man’s demise on May 3, 2003.

The loss of New Hampshire’s signature symbol hit the state like a death in the family.

Almost immediately, calls to repair the Old Man, or to replace him, poured in.

Franconia’s Dick Hamilton, president of the Old Man of the Mountain Legacy Fund and former director and founder of the White Mountains Attractions Association, recalls receiving some 30 such proposals. “There were eight or 10 that had you scratching your head, saying, ‘Maybe this could do it,’” he says. But he notes that building anything up at the site of the fallen Profile (a metal-and-glass image, a restaurant and a gift shop were among the proposals) wouldn’t do.

“We depended on a couple of studies that had been done on the Old Man,” Hamilton recalls. “The geologists said, ‘No, you can’t do anything up there, because it all comes down — and more has come down.”

Instead, the base of the mountain became a focus. One idea involved the placement of granite blocks at ground level that would render an image of the Old Man when viewed from the proper angle. But there were snags. “The only quarry that could quarry that stone was Rock of Ages in Vermont,” says Hamilton.

Plus, there were safety concerns about transporting the chunks of granite needed, each weighing 50 to 100 tons, over the road network. And if they could be and were, “It would have required a new exit off [Interstate] 93 to get the stones to the site,” Hamilton says.

The same concept, involving line-of-sight components to conjure the Old Man’s image, ultimately saved the day, at a more manageable scale. Ron Magers and Shelley Bradbury of Essex, Massachusetts, submitted both proposals, Hamilton recalls, and it was the smaller of the two that won out.

“What we really wanted to do was to honor the Old Man in a way that was respectful,” he says. “We thought it fit, and everybody that’s seen it thinks it fit.”

Today, visitors to Franconia Notch State Park can appreciate the iconic image by looking through what are called “profilers” aimed at the Old Man’s erstwhile residence. Peer through the ingeniously designed viewers, and you’ll see not a replica of the famous profile hanging off the mountainside, but a vision in silhouette that captures the craggy soul of an icon. It’s a form that, yes, fools the eye for a moment, yet perfectly presents the image of the Old Man as he was, on the mountain, keeping watch over Franconia Notch and, in essence, the whole of New Hampshire.