Roll out on a fat bike this winter 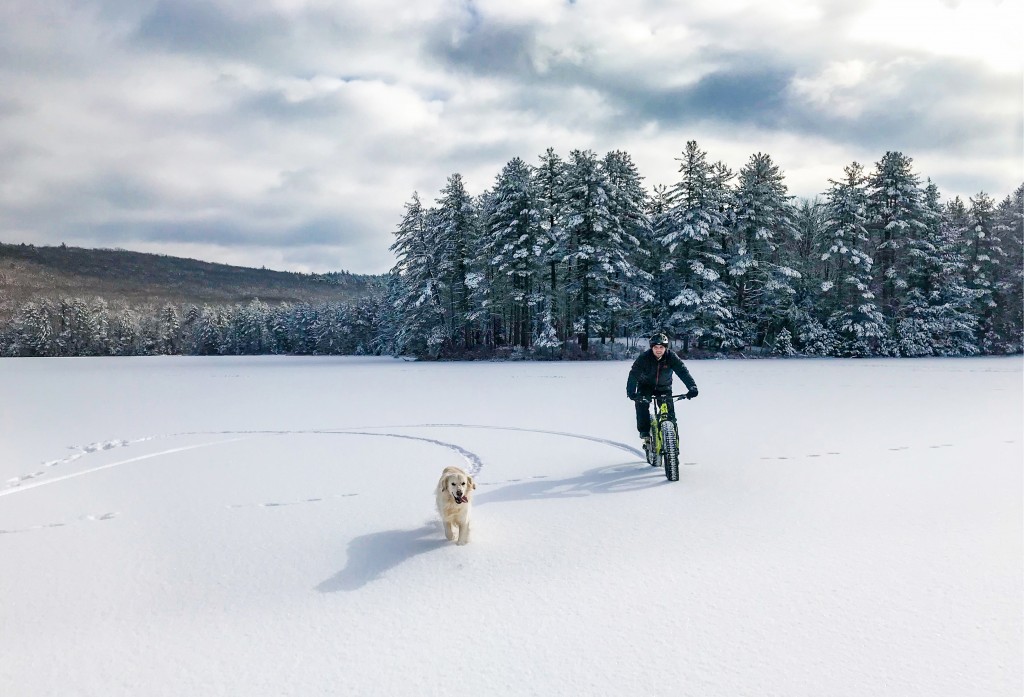 A fat biker and his dog make tracks on the frozen Goose Pond at Drummer Hill in Keene. Photo by Steve Holmes

When the snow starts to fall, most bicycles are stored away until spring. But what if it didn’t have to be that way? Fat bikes are the answer, allowing folks to roll on the snow.

Fat bikes are specially designed mountain bikes suitable for very wide and knobby tires. Instead of the standard 2.5-inch-wide mountain bike tires, fat bike tires are generally 3.7 to 5 inches wide. The tires also operate at a lower pressure, between 5 to 10 psi, enabling them to better travel over a host of squishy surfaces like snow, sand and mud.

“Snow-covered trails in winter can be magically smooth, and in the right conditions, it’s like biking on velvet,” says North Conway fat bike enthusiast Rob Adair. “In non-snow conditions, the low-pressure and wide tires make for a very stable ride.”

Though fat biking can trace its roots back to mounts like the “Klondike bike” that helped miners get around in Alaska during the 1890s gold rush, modern-day fat bikes are linked to adventurers who needed rigs to bike across sand dunes and in Alaska’s notorious Iditabike race, which is modeled after the Iditarod sled dog race.

Eventually, a Minnesota company called Surly produced them, and now fat bikes are used year-round for everything from mountain biking to touring.

“I bought one of the original Surly Pugsley fat bikes in 2006,” says Adair. He helped build many North Conway mountain bike trails during his time leading the New England Mountain Bike Association (NEMBA) White Mountains chapter (he’s now a board member of the newly formed White Mountain Bike Coalition) and grooms trails for fat biking in winter. “Most of my friends laughed and thought I was crazy, but now they all have them.”

“Crazy” is a word that may come to mind after seeing someone pedaling about in the snow in subfreezing temperatures, and sometimes at night when the wintry landscape and silence takes on an other-worldly tone.

“Riding at night can be done with headlamps,” says Adair. “Night riders should practice good etiquette, like keeping their voices low and lights down near houses.”

“The tricky part is keeping hands and feet warm,” says Adair. “Platform (flat) pedals and warm winter boots work well. Ski gloves, or pogies, like kayakers wear in cold conditions are good options for the hands,” he adds. “Generally, slow speeds and having to exert yourself, especially in softer conditions, mean you generate body heat easily.”

The pursuit isn’t without its pitfalls. Postholes, those deep holes created by trail users not wearing devices like snowshoes, can be a nightmare. When the snow is so soft that fat bikers can make trenches, the riding’s not fun and many bikers stay off.

Adair and his compatriots use a snow machine and a versatile sled called a Snowdog with a 20-inch wide track to groom trails around North Conway.

“This not only improves trails for biking, but also for skiers and snow-shoers,” he says.

According to NEMBA, other areas with fat biking include some Franconia area inns, the Highland Mountain Bike Park in Northfield, PRKR MTN Trails in Littleton, and they’ll be grooming 5-7 miles of a trail network west of Keene. Also, the Coös Cycling Club grooms some of its trails in the Gorham area.

In southern New Hampshire, the town of Stratham has gotten into fat biking with more than 6 miles of groomed trails in Stratham Hill Park.

Fat biking has slowly made its way onto a limited number of cross-country ski centers across the state. Select touring centers allow fat biking (often on a portion of its system) with a trail pass, have rentals and offer events.

Though changes due to COVID-19 are sure to be implemented, there is at least one fat biking event planned for this season, and it’s a doozy. Ever want to pedal up the Mt. Washington Auto Road in winter? The Ski, Shoe & Fatbike to the Clouds race leaves the trails of Great Glen Trails to climb up a portion of the legendary (and steep) auto road on February 28, 2021.

As Adair says, “Fat biking on snow is really fun. One of my friends who participates in many summer and winter sports says fat biking on firm snow is the most fun thing she does.”

NEMBA.org • Find out where to fat bike in New Hampshire and beyond.

Try Curling in the Granite State