A Town in Two States 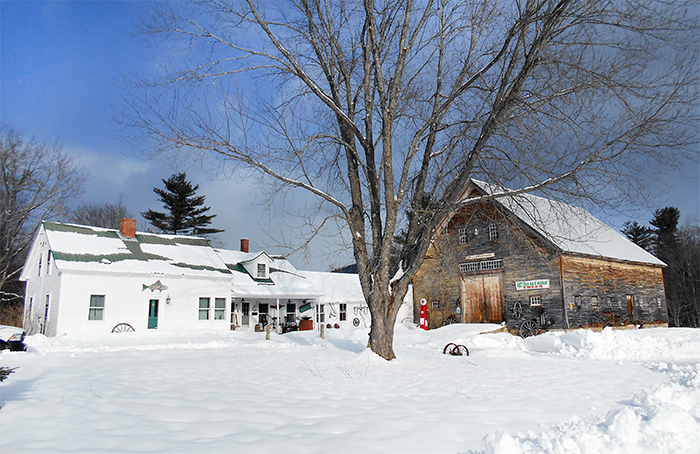 This home’s barn, woodshed and kitchen are in Maine, but the rest is located in New Hampshire. The state line actually falls between two of the house’s windows (see detail below).

There’s an old joke about a lost tourist asking a New Hampshire farmer “How do I get to Chatham from here?” The farmer answers, “You can’t get there from here.” While it might be a joke, it is also a quirky trivia fact. There are no roads going into the center of Chatham from New Hampshire. To get to Chatham from anywhere in New Hampshire, you first have to take a lengthy detour through Maine. Even residents of South Chatham can’t get to the town offices in the center of Chatham without first going out of town — and out of state.

When the boundary line between New Hampshire and Maine was first drawn on a map, whoever drew it didn’t take into consideration the topography of the area. It’s been said that this anonymous mapmaker who drew the line separating the two states must have been crazy. Chatham is bounded by Maine on the east and by rugged mountains on the north, west and south. Eighty percent of the land in town is now part of the White Mountain National Forest, with the balance being a ribbon of arable land snuggled between the mountains and the Maine border. The mountain range to the west forms a natural barrier that cuts off the town from the rest of New Hampshire. The mountains also discouraged the early development of roads into town from the New Hampshire side. With the land now owned by the federal government as part of the White Mountain National Forest, new roads aren’t likely to occur, meaning all roads in and out of Chatham go through Maine. 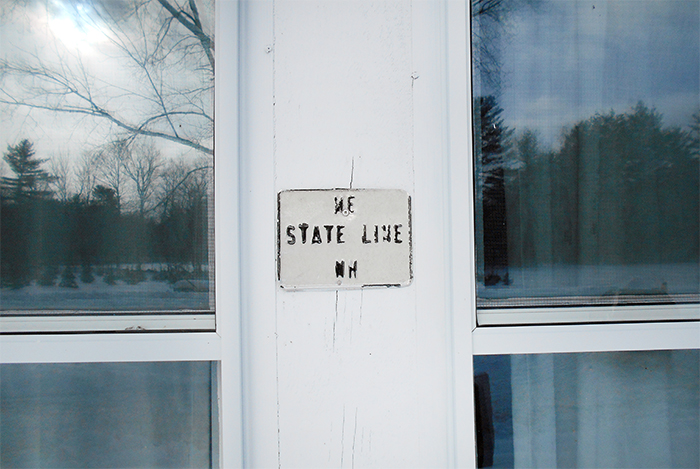 To the north, Route 113 through Evans Notch is steep and narrow with sharp corners, and is a scenic drive in the autumn. The road goes through three Maine townships before returning back into Shelburne, New Hampshire, making it a 45-minute around-the-barn trip between the two New Hampshire towns. As a state road, the portions situated in New Hampshire are maintained by the NHDOT, but the section in Maine is not plowed in the winter, and the road is closed to traffic. To the east and south, Route 113 will take you out of Chatham, through Stow and Fryeburg, Maine, before bringing you back into South Chatham, New Hampshire, a 5-to-7-mile roundabout detour. Robbins Hill Road used to connect South Chatham with the center of Chatham, but when a bridge on the road needed expensive repairs, the town voted to discontinue the road and detour through Maine rather than fix the bridge.

In 2016, the population of Chatham was 343 full-time residents. Additional seasonal residents enjoy summer homes in Chatham, primarily around Upper Kimball and Lower Kimball Pond, which also straddles the state boundary. White Mountain National Forest campgrounds bring in seasonal visitors as well. There are no restaurants, gas stations, grocery stores, hotels or B&Bs in town, so both residents and visitors typically stock up in North Conway to avoid the Maine sales tax before driving through Fryeburg and Stow, Maine, back into Chatham. The state boundary line isn’t always easy to recognize — delivery drivers sometimes try to charge a Maine sales tax, and need to be reminded that they’ve crossed over the line and are in New Hampshire again where there is no sales tax.

The center of Chatham has a town hall office building and a quintessential New England church. There is also an old one-room schoolhouse that was converted into the town library for a few years, though the historical society now uses it. A free-exchange library kiosk replaces the library. There are small farms and sawmills in town, but most residents either work in Maine or drive through Maine and back into New Hampshire to work in Conway or North Conway, about a 45-minute commute.

While Chatham is clearly a New Hampshire town, in many ways it links more closely with the state of Maine. Chatham students, grades 1-12, catch the school bus to attend school in Fryeburg, Maine, even though they are part of the Conway school district. Prior to 1968, schoolchildren attended the one-room schoolhouse in Chatham, but it closed when they were no longer able to find a teacher willing and able to tackle teaching eight grades simultaneously.

There is no post office in Chatham, and the RFD mail is delivered to residents’ mailboxes out of the Fryeburg post office, but residents still maintain a New Hampshire zip code. The Chatham town dump is located in Maine and, as such, is subject to Maine regulations not New Hampshire laws.

Fire and rescue services are provided by mutual-aid assistance dispatched from across the border in Fryeburg to handle Chatham’s needs for ambulance, fire and rescue. Chatham does have a one-bay fire station with one fire truck, which is part of the Maine Saco Valley Fire Department, but it is kept in North Chatham. Law enforcement is provided by the Carroll County Sheriff’s office with the assistance of a town constable and the New Hampshire State Police. State police must cross in and out of Maine to enter their jurisdiction. Both Maine and New Hampshire police often respond to a camping area located along the border in Evans Notch when summer soirées get a bit too boisterous. 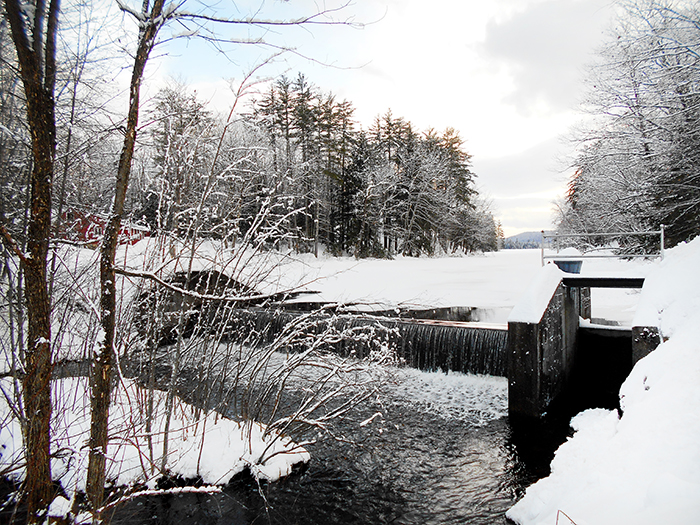 The Upper Kimball Pond dam and the footbridge somewhat replace the “bridge out” on Robbins Hill Road that isolates one part of town from the other.

In the bygone years before cell phones, when landlines were hardwired to switchboards and out-of-state long-distance calls were expensive, a call placed from Chatham to anywhere else in New Hampshire was an out-of-state long-distance call and had to be prefaced by the 603 area code. Ironically, calls to neighboring Maine towns were in-state calls and no prefix was needed.

Chatham enjoys this dual-state split personality created by geography and the whim of political land divisions. Several houses straddling the state line proudly display signs indicating which portion of the house is in New Hampshire and which portion is in Maine. At one such house, siblings might legally be different residents of different states depending on which side of the house their bedroom is in. In another house, when the legal drinking age was different between the two states, a 19-year-old might have been legally able to have a beer in the living room, but not in the kitchen. At a farm where the house is in New Hampshire and the attached barn is in Maine, the farmer was a New Hampshire resident, but worked in Maine milking his cows. His commute to work was through his ell woodshed, and because he worked in Maine he had to file Maine income tax. Another house built in New Hampshire before the indoor plumbing fad caught on added a room onto the back of the house for a bathroom. The new addition was over the line in Maine, so while the residents of the house live in New Hampshire, they must travel out of state to use the bathroom.

Hiking trails traverse into Chatham from the neighboring New Hampshire towns of Jackson, Bartlett, Conway and the unincorporated township of Bean’s Purchase, so if the lost tourist was inclined to trek up and over some not-quite-4,000-foot high mountains, then perhaps he could get there from here after all.