A Toast to Wentworth Cheswill 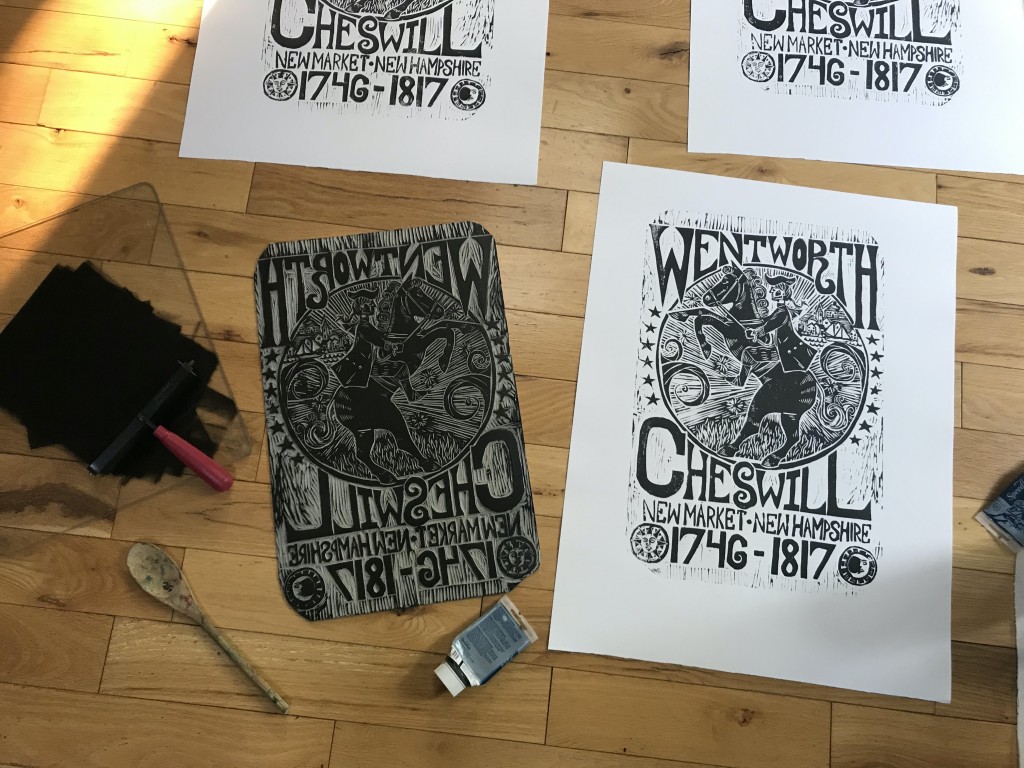 Raised in an era known for the trade of sugar and slaves, Wentworth Cheswill became the first African American elected to public office. Like Paul Revere, he rode as a messenger for the patriotic cause. He was also an early archaeologist who donated books and funds to establish his community’s first library. I believe his story could inspire generations, if only people knew about it.

When it occurred to me that Cheswill’s 275th birthday was on the horizon (this April), I dreamed of a community toast. Church bells would chime as families stepped from their homes to honor him in the street. Unfortunately, that was only a dream, because no one knew who he was. When I looked him up, he was marginalized as the Black Paul Revere — if mentioned at all. Cheswill’s birthday would go unnoticed unless I did something about it. So, I started with my children.

When his elementary school local history project did not include Cheswill as a topic option, I worked to educate my son using an early draft of a poem I wrote as a response to Longfellow’s account of Paul Revere’s midnight ride. We also visited UNH’s special collections to study his handwritten journal. Incidentally, I debuted my poem publicly in October of 2019 at an event called the New Bohemians of Newmarket at the invitation of the Newmarket Millspace Arts and Culture Laureate, a program I had created three years earlier. After the poem’s debut, I was almost immediately invited to become a trustee of the New Market Historical Society, some of whose members were in the audience. Suddenly feeling like my dream of a townwide toast might actually be within grasp, I spent the winter planning a yearlong series of art projects and public events that would educate people on the life and deeds of Cheswill in time for his big birthday. I wanted a community film festival, a human chess game reenacting the Battle of Saratoga, a children’s book, a historical edu-comic and elementary school resource packet, a public reading of a biopic motion picture screenplay and much more. I even carved a lino block print and hand pressed it to honor the man. I was not prepared for what happened next.

Suddenly, we were in the grips of a global pandemic, and the historical society canceled all events for the near future. My grandfather died of COVID-19 as people around me debated whether masks infringed upon personal liberty. It was all overwhelming. I proceeded to stay home, grow a beard, and study a true American patriot. As the Black Lives Matter movement came to the forefront and statues of Confederate leaders were being torn down in many cities, I contributed to an New Hampshire Public Radio story about erecting a statue to honor a different type of hero. In sweltering heat, I stood in the Cheswill cemetery and rambled as best I could about his life. Then the historical society entrusted me with everything they had on him, and even loaned me his personal papers to help me continue the work.

My dream of a grand public celebration may not be realistic in a world still facing such unique challenges. As of this writing, some are vaccinated, many are still waiting. So there will be no historical reenactments. No big gatherings or community toasts to honor Wentworth Cheswill. Maybe next year. I want people to know that I am no historian, but I believe in the power of storytelling, and I know that much of our history is about telling ourselves the stories we want to hear. As we spend the coming months and years reconsidering our past and our future, I ask that you consider a story we may need to hear.

I came to know about Cheswill after I passed a historical marker on the side of South Main Street in Newmarket. The marker overlooks a small family cemetery. A stone wall traces a square around several thin, pale gravestones. Downtown Newmarket does not give off the historical New Hampshire Colonial vibe like nearby Exeter or Portsmouth. It’s a mill town, and down the street from the cemetery are the brick-and-stone 19th-century buildings that hug both sides of the Lamprey River. These mills, no longer industrial centers but now filled with shops, restaurants and apartments, define the town. It wasn’t always this way though. In 1908, an article in The Granite Monthly said it was “a matter of surprise and regret that no adequate record has ever been compiled of [Newmarket], which early in the history of our state and nation played no small part.” Little did I know after reading that historical marker, and digging deep enough to truly understand its placement, that I would join a long procession of Cheswill admirers raising awareness about an unsung hero of early America.

Four years after his famous midnight ride, Paul Revere was charged with cowardice and insubordination — yet he is remembered fondly due to a highly fictionalized poem by Henry Wadsworth Longfellow. Written more than 80 years after Revere’s ride, the poem took a little-known Massachusetts silversmith and mythologized him in order to make a point about the issues that were leading our nation to civil war. Later, that same poem, with all of its historical inaccuracies, was fed to generations of American children, who read it as straight history. There is a Paul Revere statue. There was a commemorative stamp. You know the story. We all do.

So what about Cheswill? Is he worth remembering? We used to think so.

In 1820, US senator David Morrill of Epping argued the negative effects of discriminatory racial legislation during congressional debate over the Missouri Compromise. His remarks focused on New Hampshire’s highly regarded Cheswill, an example of one who tragically could not enter, let alone own land in, Missouri due to his race. Seventy-five years later, New Hampshire citizens still venerated him. That 1908 article I mentioned also described his patriotic ride. Paraphrasing from town records and deliciously embellishing, it has Cheswill “booted and spurred for a heavy ride like the immortal Revere.” He “springs to the saddle, the bridle he turns, but lingers and gazes till the vote of the meeting is announced, then bending forward, with word and spur, he urges the faithful beast to highest speed.” The poetic pageantry is undeniable. Cheswill was regarded as a hero. In 1916, the same periodical published a six-page description of his old mansion written by Nellie Palmer George, who grew up there. Her essay concludes with her reflection on Halley’s comet, viewed in 1900 from the Cheswill mansion kitchen door. She writes how “with frightened eyes we watched the comet nightly, and heard our elders talk of war, of the dreadful crime of slavery …”

Just think: Who in New Hampshire garners enough interest that anyone would read a six-page description of their house? Well, Cheswill once did. 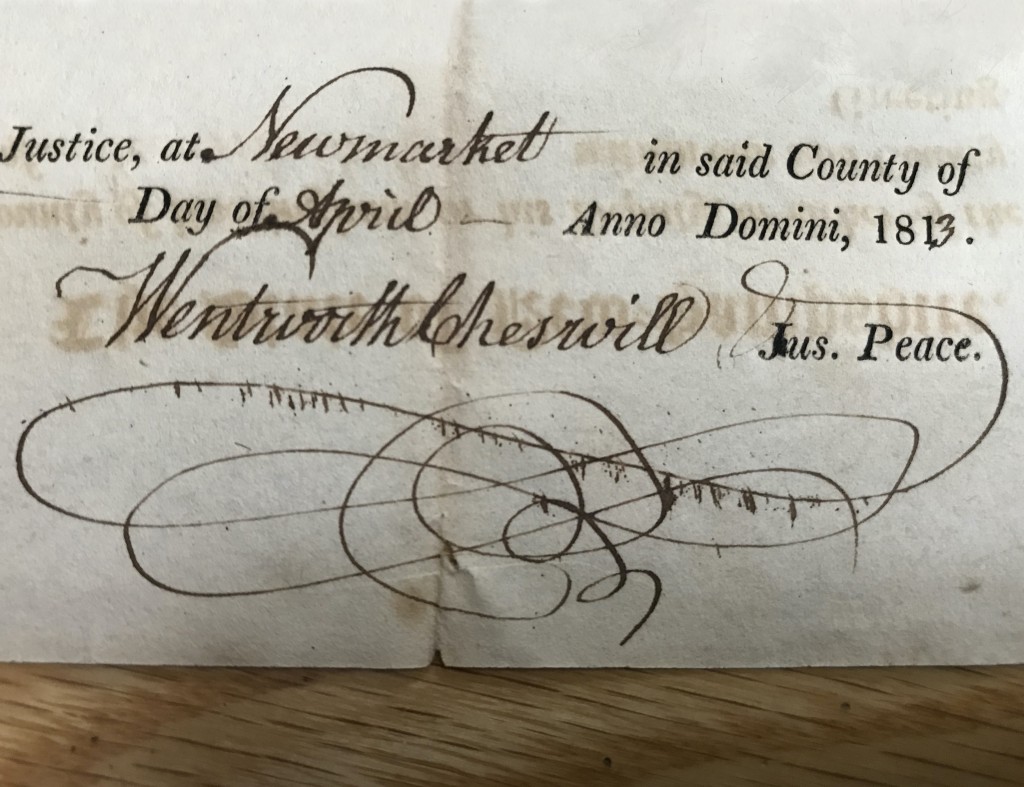 It is only in these last 100 years that he was forgotten, even by many in his own community. Not until a man named Richard Alperin, just a decade or so ago, led a group of local history buffs and Cheswill descendants to clean up that family cemetery. Alperin also worked tirelessly to get the historical marker placed, meaning his work was critical in inspiring my own interest. Alperin even called me at Christmastime to talk about Cheswill. Key mentions on that marker originally ignited my curiosity, like how he made “pioneering archaeological investigations.” He was a veteran and the grandson of a “Negro.” Frankly, the historical marker made him sound like a 18th-century mixed-race Indiana Jones. How did I not know about him?

Cheswill led an astonishing life of public service. He was a constable, school teacher, inaugural school board member, selectman, town moderator, assessor, justice of the peace for the county and even coroner. In fact, he served every year of his adult life but one. There are some who note that the lost year of service conspicuously coincides with the ratification of the US Constitution. Cheswill wasn’t a signer, but his very good friend John Langdon was. He fought in the Battle of Saratoga, the American rebellion’s first major victory, and that pioneering archaeological research informed Jeremy Belknap’s first volumes of New Hampshire history. From what I can gather, he was not just New Hampshire’s first archaeologist, but he was arguably one of the earliest in
the nation.

In his twilight years, he continued his good deeds, giving $13,000 to establish the Newmarket Social Library in 1801. Ultimately, he succumbed to typhoid fever following the infamous Year Without a Summer — another fascinating moment in history. Caused by the eruption of Mount Tambora in Indonesia, this global event decimated crops from Europe to New England. The dismal weather inspired Mary Shelly to write “Frankenstein.” She actually completed the novel the month that Cheswill died.

If there ever was an unsung American patriot who deserves a bit of veneration, it’s Cheswill. Let’s give him an embellished poem, maybe a song and a painting — not for his legacy, but for our own. The scholar and patriot who rode his gray mare through the night in service to and protection of his community has much to teach us. History is what we choose to remember, and I choose to remember Wentworth Cheswill. I hope you will too.

Now that it’s his 275th birthday, I only hope that I have done enough to spread the word.

John Herman is an artist, writer and teacher. He lives in Newmarket.