A Tale of Two Flus 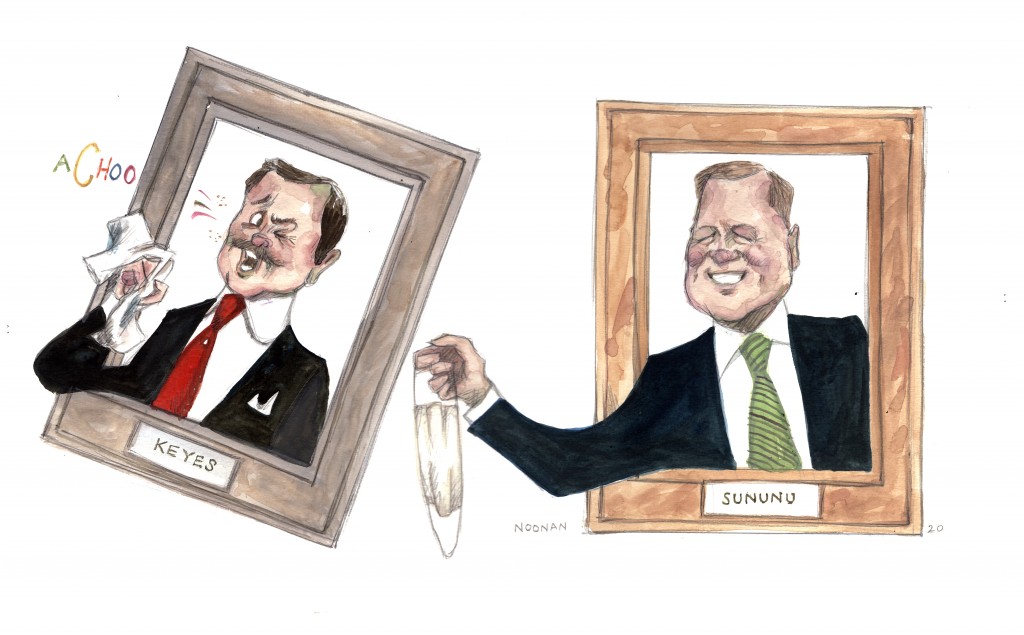 The last New Hampshire governor to serve during a major pandemic wasn’t remembered so well. That was not his fault.

His name was Henry Keyes, a Republican from North Haverhill. He served a single term as governor from 1917-1919, presiding over the state during the horrible days of the 1918 Spanish Flu. He, in fact, got the flu himself, and was almost among the 2,700 in the state who died from the disease. Nevertheless, he survived, and was elected that fall to the first of three terms to the US Senate.

Despite the fact he held statewide office for two decades, it wasn’t until nearly a century later that the Statehouse finally put up his correct photograph among the portraits of governors that line the walls. You read that right — originally a picture of someone else was mistakenly identified as Keyes. And then that picture fell off the wall.
If the first few months of New Hampshire’s response to the coronavirus are any guide, the state’s current governor, Chris Sununu, might be treated with a tad bit more respect.

Sure, there was some grumbling among his own Republican base about his decision, like nearly every governor in the country, to close all commerce except essential services. But the truth is that Sununu, who was already among the nation’s most popular governors, has watched his approval ratings get even better.

In late March, a University of New Hampshire Survey Center found 73% of the state’s residents approved of Sununu’s handling of the coronavirus in the first weeks of the outbreak. This included 63% of registered Democrats.

These numbers for Sununu stand out for two reasons. First, not all leaders are universally loved in this time of crisis. The same UNH poll found that only 41% of Granite Staters approved of the way President Trump was handling the epidemic. The number of registered Democrats who approved of Trump? Three percent.

Second, Sununu’s numbers are especially impressive when they are compared to Gov. John Lynch, the Democrat who has been viewed as the most popular governor of the state in polling history.

Lynch saw his poll numbers soar after his hands-on approach to floods in Alstead during his first year in office. But the greatest crisis he faced as governor was the Great Recession in 2008. During that time of strife, Lynch saw his approval rating go down 11 points (though that was over a longer period of time than Sununu has so far faced in the current crisis).

Sununu, of course, is up for reelection this year. The filing period opens up in June. As of this writing, two Democrats were hoping to challenge him. It appears that their jobs just got harder. Making it even tougher: Sununu appears to be getting along fine with the state’s pairs of US senators and representatives, all Democrats.

It is too early to be concerned about where Sununu’s portrait will be hung on the Statehouse wall. And if a full-blown recession hits, he could well be blamed by voters for playing a part in causing it by making businesses close. But now, as hunkered-down residents of the state see the governor all over WMUR-TV, this has been a good moment politically for Sununu.