A NH history lesson about the KKK

Would you be shocked to learn that the Ku Klux Klan was on the march in Exeter, New Hampshire, just 25 years ago? It was a small march, but it made some national headlines. When the group’s leader left town, the story ended. 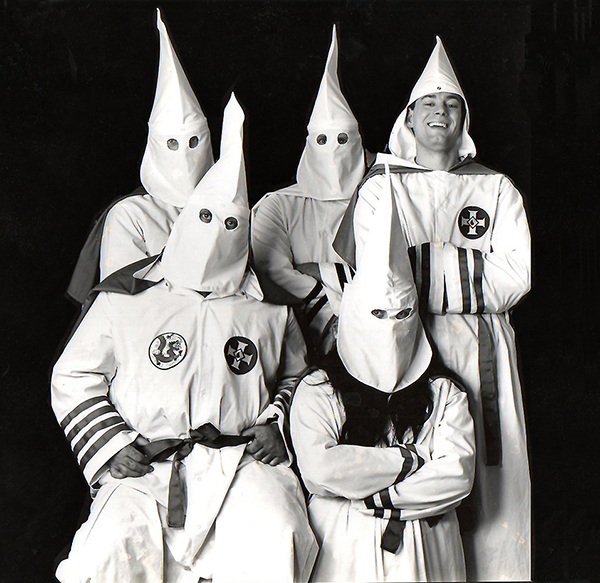 How quickly we forget. Ask any bright NH 7th grader about the Ku Klux Klan and they will probably think you’re talking about a new Xbox game (try it). But the recent riots in Ferguson, Missouri, show how close we remain to a time when America was segregated along battlelines and bloodlines. Even here in the relative serenity of the Granite State, the faces of racism have been revealed, or deliberately hidden.

In August of 1989, Tom Herman was 28, worked for the Rockingham County Sheriff’s Department and was a police officer in Newfields when he applied for a permit for a Klan rally at Swasey Parkway. The permit was denied but Herman and his cohorts in Klan regalia walked through downtown Exeter with signs and leaflets. When interviewed by Fosters Daily Democrat, Herman remarked, “I see a lot of blacks out on the streets and they don’t act like white people,” he said. “They aren’t civilized at all. I want to be separate from that. I want to be with people who are civil.” The Boston Globe picked up the story and by 1991, Herman’s job at the sheriff’s department was terminated, a move he called “discriminatory.” Local Klan activity ceased when he moved south and essentially disappeared, but this striking photo taken by local photographer David Mendelsohn remained, presenting a question: Where is he now?

He wasn’t really hiding, but it required the services of Dover private investigator Frank Santin to track him down.

Now 53 years old, he’s a firefighter who lives in Washington State. He’s been fighting wildfires for a dozen years and that’s what he was doing on August 8, 2014, when we reached him by phone at base camp. He seemed happy to talk.

The conversation went as follows:

Are you still active in the Klan? No, I dropped out entirely. I keep a very low profile. I’ve not been involved since leaving NH. I left to put things behind me, but stuff follows you. After moving south, I started my own business and people from up north tracked me down and tried to ruin my business.

Any regrets? All of us could say we have things we wish we didn’t do that seemed like a good idea at the time.

Do you keep track of others you knew?  Once in a while I’ll pull up the Internet and see what happened to people. Some went off the deep end. You get a little power and some people are utterly corrupted by it. I knew one Grand Dragon and both he and his wife died in very mysterious circumstances.

Any stories from those days you’d like to share? (Laughs) Probably not. I want people to know I’ve always treated people with respect. In my [police] job I did not look at skin color, gender, sexual orientation. I treated everyone the same and, if someone was out of line, I did what I had to do. Our society should be based on respect and we should take people at face value. Those are timeless values to me. I’ve gone on to do very well, I’m respected for what I do, I do a lot of charity work.

Do you still hold the same views you did when you were here? I think everyone should be proud of who they are. It gets me that there can be a thing called the United Negro College Fund but everyone would scream about a white college fund. Or there’s a group called La Raza [the people] that’s pro-Hispanic. You can be anything but white and love your people. You should understand that I have two Hispanic step-children, one of whom happens to be gay.

Care to offer any words of wisdom to that guy in the photo? Well, I tell a lot of young people that they should think about what they post to YouTube or Facebook. The things you do there will be seen for a long time by prospective employers. I guess I should have done things more privately, but I’ve lived long enough that I’m a part of history now. People come up to me to ask what was going on back then. I’ve lived a Forrest Gump life. I’ve worked with and run into people from all over the spectrum: Billy Graham Christians and pagans and gay, lesbian and transgendered people and someone managing a marijuana dispensary.

That sounds like what folks call “diversity.” I accept everybody. The journey is all about respect. If someone comes into your life, there’s probably a reason why.

If someone tried to shame you for your years in the Klan, what would you say? Let’s see what you did 20-30 years ago. And take a look at my life now and the person I am today. I went through some DNA testing and found out that, along with German and Western European ancestry, I had some Asian ancestors. I’m fine with that. I’ve never hated anybody. I wish everybody could just pull themselves up by the bootstraps. When I remarried, my second wife was Syrian. Her son was killed in a car accident and within a year she came down with cancer. She died on my 50th birthday. I lost my dad next and then my older brother. Life has definitely taught me a lot of things including how to better relate to other people.

What do you plan to do with the photo? I’m gonna put it in an archival quality mat and frame it. Hang it on the wall somewhere.

(Tom Herman was located by Frank Santin of Investigative Services LLC in Dover.)