A History Lesson on the Newichawannock Canal 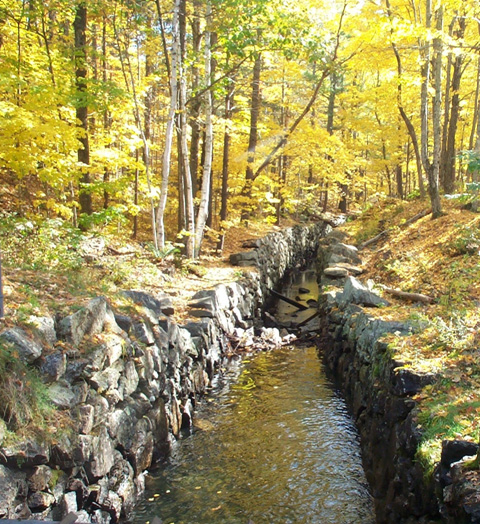 Newichawannock is an Abenaki name meaning “river with many waterfalls.” It’s hard to spell and even harder to pronounce, so the Newichawannock Canal is often referred to as the State Line Canal ­— so dubbed because the east side of the canal is located in Acton, Maine, and the west side is in Wakefield, New Hampshire. If you could broad jump 12 or 13 feet, you could get a running start in New Hampshire and land in Maine. Sometime while you were airborne over the canal, you’d cross the state boundary line.

The canal runs from the dam at the outlet of Great East Lake roughly 830 feet downstream in a southeasterly direction until it turns to the northeast to meet a natural inlet channel emptying into Horn Pond. The entire length of this manmade canal constitutes a segment of the boundary between Maine and New Hampshire.

The sides of the canal are approximately 12 feet apart and vary in height from 8 to 16 feet as they cut through the natural topography. The canal sides are built of rough split stone and unworked fieldstone, and are laid up without mortar. Most of the stones are bigger and heavier than any one man can handle. The walls are capped with split and roughly squared off stone, except in one short section where granite millstone halves top off the wall.

Built around the time of the Civil War, this canal was excavated by hand. Draft animals dragged the rocks and loads of split stone into a position where they could be manually lifted and set into place. Local farmers and lake residents assisted in the construction to earn some extra money.

The goal of this ambitious undertaking was to increase the water supply powering the Great Falls Manufacturing Company textile mill complex situated some 25 miles downstream in Somersworth. Work on the project began in 1851, took a temporary hiatus during the Civil War and was completed in 1868. 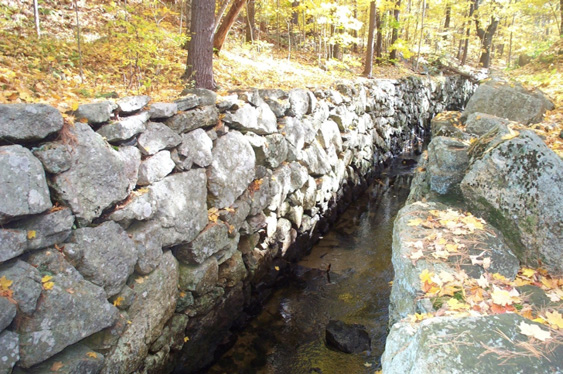 The Great Falls Manufacturing Company, founded in 1823, began operating textile mills using the natural water power of the Salmon Falls River at Somersworth. By about 1860, the mill complex had grown to include six large buildings and employed 1,500 workers. As additional manufacturing buildings were built and production increased, a steadier and more reliable source of water power was needed. The construction of the canal at Great East Lake solved the problem.

The successful completion of the canal allowed the Great Falls Manufacturing Company to develop from a small enterprise to one comprising a large complex of seven mills, which boasted some 83,120 spindles and 2,120 looms in operation every day making 13 different types of cloth.

Canal construction included a stone arch bridge that carries a local road over the stream. The bridge spans 12 feet with a height of 13 feet from the water to the base of the keystone. The arch is built largely of natural fieldstone with little or no evidence of splitting or trimming. The rocks of the arch ring itself are natural wedge-shaped fieldstone and rocks with sharp edges, indicating they were split from larger fieldstone or locally quarried.

And while there are different opinions about the correct pronunciation, New-ich-a-wan-nock seems to be the commonly accepted pronunciation. 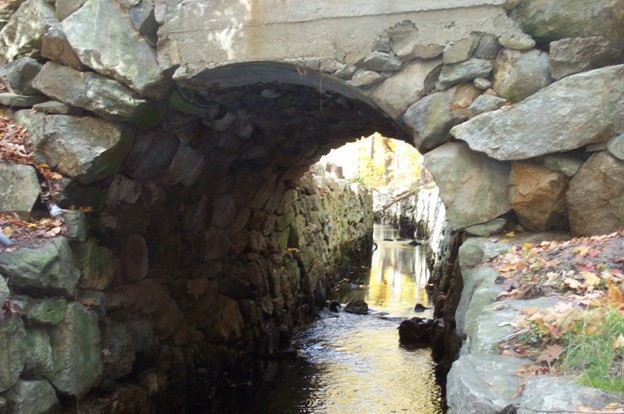