We’re glad you’re here. We just might not tell you. 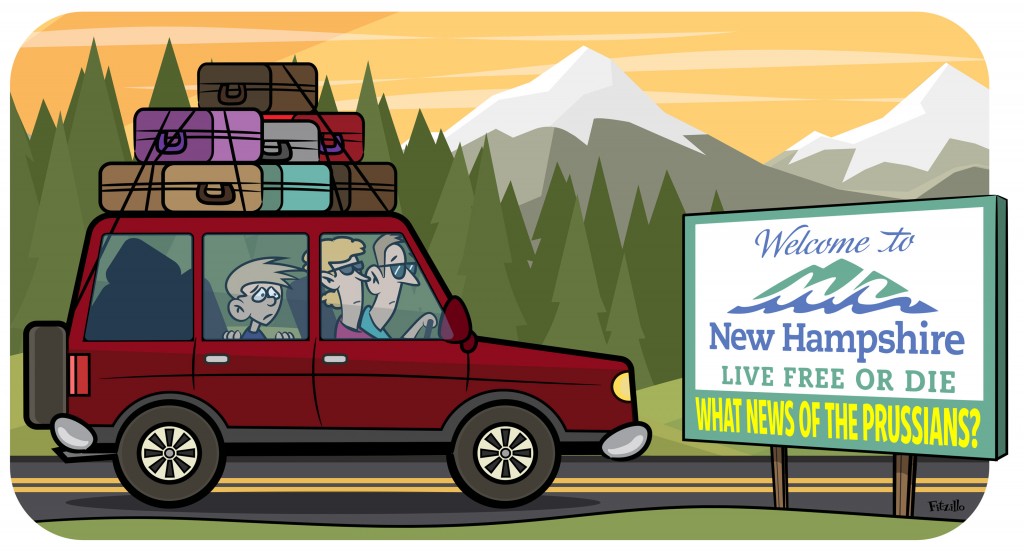 According to the number crunchers down at Atlas Van Lines, New Hampshire was the state with the fourth highest number of people moving into it last year. Apparently, they have a statistics department that tracks that kind of thing.

So, by way of greeting our newest neighbors, I say … not a lot. We’re a welcoming sort, if sometimes a little less than loquacious. We’re not as gruff as Maine but not necessarily as huggy as Vermont. We can be helpful though, so here are a few tips to help you acclimate to your new home state.

First, don’t buy into stereotypes. While you should have your state-issued pickup truck and banjo by now, you can put them away. They’re just props to keep people from Massachusetts distracted. Also, I only know one guy with a cow.

Our form of governing can seem a little quirky. Our 400 state representatives are actually of us, which is great/terrifying. The guy shouting gibberish at traffic is also the guy who cosplays as Mr. Smith Goes to Concord.

Oh, also, you’re probably going to be expected to hike. You don’t have to though. They can’t make you.

Eventually, after we’ve gotten to know you a little, we will open up a little. We’re not mute, just circumspect. Our state’s most famous orators are Daniel Webster (statesman) and Mike from Laconia (idiot).

You should probably know that there are phrases unique to New Hampshire that can be very colloquial. Practice these terms and idioms, and when winter comes, put on some shorts, go outside and try them out on your neighbors.

“What news of the Prussians?”
This is a way of saying, “Hey, friend, what’s new?” We all say it, all the time.

Actually, no. I made that up. I just think it’d be awesome if we did.

“Up country”
According to anyone from elsewhere, pretty much anything north of Nashua. It’s been scientifically agreed upon, however, that up country is actually Barrington. There will be no further questions.

“Down cellar”
It’s not a basement, it’s a cellar. It’s where we keep Grammy’s ceramic bean crock. And Grammy. In the crock.

“Tonic”
This has faded from use for the most part, but there’s still a tonic aisle at Demoulas.

“Beater”
The car you drove when you were a bagger at Demoulas.

“Wicked”
“Wicked” is a universal modifier that can be used in conjunction with almost anything to indicate veryness: wicked muggy, wicked good, wicked gassy (too much tonic).

Our friends on the wrong side of Salem may attempt to lay claim to this one, but they’d be wicked wrong. My wife’s college nickname at UNH was “Wicked Aim.” She’s a New Hampshire native, ergo, we get “wicked.” Proposal: We let Massachusetts keep “Dunks” to maintain the fragile peace along the border. No one calls it that anyway. It’d be wicked skeezy if they object.

Memorize these terms and before long you’ll be recognized as one of us. Or, you could just say nothing.