There’s no better place to spend a sunny summer weekend than on the quiet side of New Hampshire’s biggest lake.

The view of the sunset across Lake Winnipesaukee from our room in the Wolfeboro Inn was so lovely that we decided to savor it longer by dining right here, on the terrace of Wolfe’s Tavern. Seated with unobstructed views of the pink sky, we ordered a Smuttynose IPA and Tuckerman Headwall from a list of nearly 100 choices. For dinner, we started with asparagus “fries” served with chipotle dip, and a salmon-scallop croquette with two tasty dipping sauces. My entrée was a NH wild mushroom tart with spinach and local goat cheese baked on an eggplant Parmesan crust, with a carrot-broccoli terrine and garnished with crisp-fried leek rings. Tim’s braised chicken breast was sauced with Madeira and fresh sage and served with hash browns of potatoes, Brussels sprouts and house-cured pork belly. Fig-ginger chutney was a nice contrast.

We returned to the deck for a breakfast of challah French toast and the inn’s Ultimate Breakfast BLT: local bacon, lettuce, tomato and avocado topped with a fried egg. We walked down Main Street, past Winnipesaukee Chocolates, conveniently near Wolfeboro Inn. Their chocolate bars have a local flavor — each named for a Winnipesaukee place or event, but we bought a bag of crisp butter toffee made with local maple syrup, sandwiched between layers of chocolate and encrusted with salted walnuts, just in case we grew peckish before lunch.

At the cute Victorian railway station we met Molly the Trolley for a 45-minute narrated tour, and learned why Wolfeboro is called the “Oldest Summer Resort in America.” (Royal Governor Benning Wentworth built a summer home here in 1768.) We had an all-day ticket, so hopped off at Wolfeboro Historical Society’s museum to tour the furnished rooms of the 1778 Clark House, the one-room schoolhouse, and the firehouse filled with antique fire-fighting vehicles. Hopping back on the circulating trolley, we rode through Wolfeboro Falls and along Crescent Lake, then along the shore of Sewall Point, past some noticeable summer homes.

Instead of returning to the docks, we hopped off and walked up Bay Road to Wolfetrap Grille & Rawbar. On the deck overlooking Back Bay we envisioned ourselves in Bermuda as we enjoyed a Dark & Stormy made with their own ginger beer and a plate of conch fritters. I hesitate to say that we wolfed them down. We should have walked back, but couldn’t resist Wolfetrap’s complimentary shuttle to the town docks in a vintage launch.

Re-boarding Molly, we rode to the Wright Museum, where we stepped back into the World War II homefront in vignettes — a 1942 gas station, a soda fountain and furnished rooms showing family life, popular culture and women’s role on the home front. The military effort is represented by dozens of military vehicles, including a 42-ton Pershing tank, the only surviving example from the capture of the Bridge at Remagen. Exhibits tell stories of Americans at war, including uniformed women’s services, especially the WASPs. Back to peacetime, we followed Bridge Falls Walking Path to the rail station for ice cream at Bailey’s Bubble and to admire the tableware and Christmas ornaments at Hampshire Pewter. 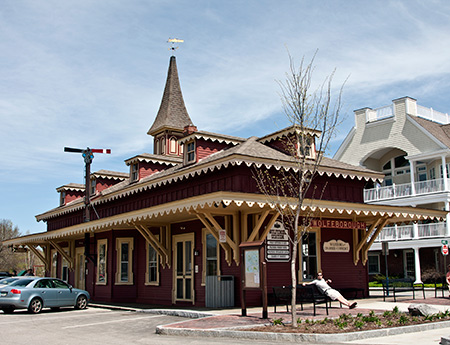 We’d seen the lake from everywhere but its waters, so we boarded the vintage wooden Millie B for an early evening cruise and views of the mountains, lakeside homes and boathouses, and the loons that frequent the lake’s northeastern corner.

We’d heard raves about Chef/Owner Terry Adrignola’s cuisine and were not disappointed. The baby lamb chops with purée of mint and peas appetizer combined familiar flavors in a new way, and my watermelon and feta salad with fresh herbs and lemon-champagne vinaigrette was delicious. Each of us chose a dish featuring risotto, but quite different ones. Seared sea scallops were served over carbonara risotto made with pancetta and fresh peas, and pan-seared duck arrived over goat-cheese risotto, with a reduction of mixed berries and port.

Breakfast was at a deck table at Downtown Grille Café, where we ordered corned beef hash Benedict (the eggs were just right) and a garden omelet filled with tomatoes, green onions, spinach and sautéed mushrooms, along with organic Fair Trade cappuccino. To atone for yesterday’s trolley and all that risotto, we rented bikes at Nordic Skier and followed Cotton Valley Rail Trail alongside Back Bay, through (we mean through — it’s an old rail line) Crescent Lake and a corner of Lake Wentworth and beyond. We turned back short of its 11-mile span to swim at Allen A. Albee Beach on Lake Wentworth.

We’d had the foresight to pick up lunches at Full Belli Deli, so after a cooling swim, we ate our combo sandwiches brimming with turkey, rare roast beef, honey-smoked ham and Genoa salami, all by Boar’s Head. A bonus from last night’s boat ride was admission to the nearby NH Boat Museum. Here we stepped back into the era of classic wooden boats with vintage mahogany and antique boats, models and exhibits on sail racing and the annual Smith River Canoe and Kayak Race.