The Soul of Granite State Skiing

A writer recounts the joys found on New Hampshire slopes

On a cool, misty morning this past spring, my 18-year-old daughter Brynne and I drove west along Route 302, from Glen toward Bretton Woods and the Mount Washington Hotel. Along the way, we passed a number of old ski clubhouses, including the Skidaddlers and the Massa-Schussers Ski Club.

A curious kid, Brynne asked about these rustic-looking structures, set back off the road, with signs boasting their oddball names. I smiled, and told Brynne that, for me, they represented a bygone era of skiing. Those were halcyon days before the condominium craze, when the sport engendered a sense of community. Pre-ski breakfasts and après-ski dinners meant social gatherings, a chance for skiers to regale one another with tall tales of on-slope exploits.

"Jeez, those places were such a blast," I told my teenager.

Then my words trailed off, my brain wandering down Memory Lane….

"Dad? Dad?" Brynne said, tapping my shoulder, snapping me out of my revelry.

I laughed, admitting that I was lost in my thoughts. That happens to me fairly frequently in northern New Hampshire these days. In ski country.

Though I was born and raised in northeastern New Jersey, I've always had a strong bond with New Hampshire. My mom was a native of Manchester's West Side, and her parents were an enormous influence on my five siblings and me. We took vacations to the Granite State throughout the year, but my favorite trips always came during winter.

Grandmere and Grandpere were quintessential New Englanders. They didn't moan and groan about winter. They embraced it. So did my mom and her brothers, my uncle Bill and uncle Art. When my folks got married, in Manchester in January of 1954, they didn't look for a warm-weather honeymoon. They went skiing.

That mindset is contagious, and my parents instilled the same love of the seasons in their kids. A mid-winter trip to New Hampshire promised adventures in the hills. Mom and dad would load us into our cavernous Ford Country Squire wagon (seatbelts optional) for day trips to Crotched Mountain, Ragged Mountain, Pat's Peak and Gunstock, or exotic weekends further away to Sunapee, Waterville Valley, Cannon and Wildcat. 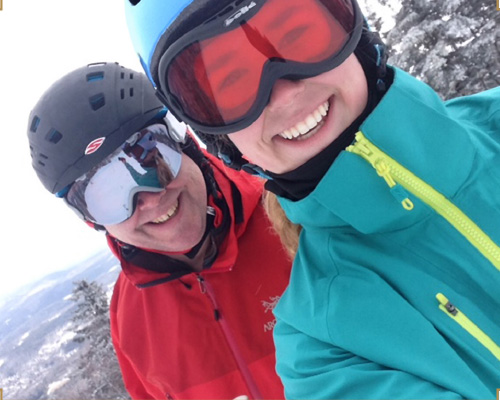 My father – the very definition of the gregarious Irishman – always sought lodging that offered big public areas and family style dining. The idea of sequestering our brood in a private condo was the antithesis of the man. I can still see him holding court at a large table, surrounded by friends new and old, swapping stories and adult beverages. If not a Norman Rockwell painting, it was the epitome of fun. How could a young, impressionable kid not fall in love with that?

The on-hill experience was even better. I loved skiing from the get-go. Not fleet of foot, I was enthralled with the sport's sense of speed, the pull of gravity, and the ever-changing conditions. Sure, grooming in the 1970s was unpredictable, but that simply added to the challenge.

We learned to love New Hampshire's boilerplate blue ice – the surface that launched the epic adage, "If you can ski here, you can ski anywhere." Powder days were treasured as much four decades ago as they are today. The après-ski hot chocolates (and later cold beers) and bonfires were icing on the proverbial cake.

New Hampshire, of course, is steeped in United States skiing history, with places like the CCC trail at Wildcat across from Mount Washington's legendary Tuckerman Ravine, Black Mountain in Jackson dating back to 1934 and Gunstock in Gilford, the highest peak in the Belknap Range. As I got older, my intrinsic interest in history pushed me to learn more about skiing's pioneers, and the "larger than life" exploits of Dartmouth's Dick Durrance and Brooks Dodge Jr., revolutionary Austrian instructor Hannes Schneider, Mount Cranmore's Harvey Dow Gibson, Tuckerman daredevil Toni Matt, the incomparable Mary Bird, and a handful of early Olympians (including Durrance and Dodge). I couldn't help but think what a hoot the ski trains that ran from Boston to North Conway must have been.

My first chairlift ride, at Gunstock, is a part of family lore. The short story is, I fell off.

Which, considering that Gunstock was home to the region's first chairlift (in 1937, known as the Rowe Mountain chairlift), is pretty funny. I was with my uncle Art, a mountain of a man, and I assumed he'd grab me. He didn't, and I slid off the front of the old wooden chair and fell about 10 feet, to my unending embarrassment and my siblings' unending delight. But not even that faux pas could dull my enthusiasm.

We also loved Waterville Valley, but not for the prevailing wisdom. Tom Corcoran introduced skiing to Camelot, as the resort became a popular retreat for the Kennedy clan and their celebrity coterie. Skiing became sexy. As a kid, I didn't know much about "sexy," but it became clear that this was a sport of the beautiful people, and that always draws a crowd. Which, in turn, was a big plus for the ski industry.

After Dad passed away in the early 1970s, my family relocated to New Hampshire. As a hockey player, I sacrificed time on the slopes for turns on the ice. But I still managed a few outings, the most memorable being at Wildcat, and the two-person gondola that felt like an amusement park ride on windy days.

Locally, McIntyre Ski Area – Mighty Mac! – opened in Manchester just before our clan moved to the Queen City. This was a huge boost for my high school buddies on the ski team. Unencumbered by hockey obligations, my brother Michael and his pals hung out at McIntyre rehearsing their freestyle moves like tip rolls and worm turns.

"Fun stuff that kept us out of trouble," said Mike, still an expert skier.

My baby brother, Matthew, 12 years my junior, spent his formative years in Manchester, and many days and nights at McIntyre.

"I remember riding the chairlift with (our sister) MaryEllen at McIntyre when I was 8 or 10 years old," said Matt. "I always felt like it was a special treat, like the babysitter going rogue. As a little kid, it seemed like the whole world."

Really, isn't that what skiing is all about? Endless possibilities?

Then, later, in the 1980s and early '90s, I revived my love affair with skiing. I cherished trips to Loon Mountain with my brother Sean. Being in our 20s, we had the stamina to enjoy a night carousing and still make first tracks. Sean would jokingly refer to these early morning excursions as "ABC," short for "Angel Street for Breakfast Club." I wouldn't miss those turns for anything.

When snowboarding first made its mark, I was enamored. Unfortunately, New Hampshire resorts initially didn't share that infatuation. Mike and I once headed to Bretton Woods, after an overnight snowfall, practically giddy with the promise that the slopes offered. Upon our arrival, we were unceremoniously told that only three trails were open to snowboarders.

Mike was justifiably annoyed, and history has proven him right. Snowboarding hasn't only been accepted, it's been a savior for many resorts. The single plank brought an entirely new demographic, and a critical financial surge. Though there were learning pains – yes, snowboarders scrape more than their share of powder off the hill – there's no question that the snowboard itself has been an enormous boost for the business.

Today, Old Man Winter has been more fickle than ever regarding his annual allowance of natural snow. Snow, of course, has always been the sport's single most defining characteristic. Slope design, chairlift capacity, ski technology have all changed dramatically.

But that's all for naught if you don't have good snow.

Regardless of the cause, the planet, and the Northeast in particular, is warming up. That's a fact. The result is an annual snowfall that is far less predictable than it was just 50 years ago, when I was a kid. The saving grace is that man-made technology, from snowmaking to snow grooming, has improved exponentially.

"You don't typically think of snowmaking as customer service, but that's really how our guys think of it," said Ben Wilcox, Cranmore's general manager. "There's such a passion, knowing that you're making such a dif-ference for the mountain and for all these people."

The commitment to snowmaking also translates to a four-season obligation, maintaining and upgrading lines. That, combined with massive in-season grooming and energy costs, plus insurance obligations, makes the business of skiing an expensive proposition. That's reflected in lift ticket prices, which many resorts struggle to contain.

Skiers, though, find a way to make it work. That's a testament to the allure of the sport. My wife and I have raised our two daughters skiing in New Hampshire. Winter doesn't faze them. Quite the contrary, it energizes them. That's how it should be.

Still, whether my girls have discovered the soul of skiing is an open question. It's an elusive, even ephemeral, concept. For me, it's the shared experience of celebrating winter, of taking the seasonal offerings and making the best of them. Because when you immerse yourself in this sport, the sport unveils its greatest gifts. Skiing in New Hampshire does that.