Take a Fall Tour of the Upper Valley

On the way north we stopped for dinner in Hanover, at Canoe Club, where we noted their reliance on local farms and producers, and the autumn vegetables featured on the menu. We began with a salad of local beets with chèvre and pistachios, and a roasted pear arugula salad with pine nuts and Bayley Hazen bleu cheese. The lamb ragu entrée featured local lamb, and my acorn squash was stuffed with Parmesan risotto and roasted walnuts.

The White Goose Inn Bed and Breakfast is one of several brick buildings in Orford, which once had its own brickyard. The imposing house dates to 1833, adding to the earlier wooden house built in 1766; today’s B&B has wide board floors, stenciling and  antiques as reminders of its long past. The three-course breakfast served in the sunny dining room was highlighted by crème brûlée French toast.

We started at the Orford Social Library, a former millinery shop, where we bought an informative booklet, “Back in Time,” published by the Orford Historical Society. Along with an interesting history of the town, which dates back to 1761, it includes a map of the village identifying historic houses and buildings. Orford’s most noticeable feature is the row of seven houses set back across a wide green along The Ridge, all built between 1800 and 1839. These and the half-mile of buildings on either side of Orford Street (Rte. 10) comprise the Historic District.

The house in the middle of The Ridge, opposite Bridge Street, was built by Samuel Morey, inventor of the internal combustion engine — and also the steamboat, although duplicitous Robert Fulton got the credit. The steel arch bridge to Vermont, also on the National Register, is dedicated to him. Opposite The Ridge are several equally historic buildings whose sophisticated architecture show Orford’s early prosperity as a thriving agricultural community with ready access to city markets via the Connecticut River. At the north end of the village, we found West Cemetery and the gravestone of a veteran of the Battle of Bennington.

Places to visit from this article

We drove north through Piermont to Bradford, Vt., for lunch, crossing yet another steel arch bridge on the National Register. In an old brick mill building, we found Alexander’s, where we chose a terrace table overlooking the river. We both decided on chicken sandwiches, one lemon-marinated roast chicken and the other coated in panko and fried, stacked onto ciabatta and topped with onion rings.

We followed one of the driving tours in the historical booklet, through Orfordville, where we stopped to see the beautiful stained glass window in the side of the Congregational Church. We were tempted to look for the old soapstone quarry behind the town offices, but instead we continued on Rte. 25A to the crossing of the Appalachian Trail, which we followed south to the twin summits of Mt. Cube. The north one overlooks Mt. Moosilauke, and from the south summit we could see Mt. Ascutney and much of the Upper Valley painted in colored leaves.

We’d heard good things about Chef Martin Murphy’s tiny Ariana’s Restaurant and had to taste it for ourselves. He uses fresh seasonal produce, meat and dairy from local farms, and names them on the menu; we also liked the option of ordering several smaller plates to sample a wider variety. We chose steamed dumplings of organic pork from Winsome Farm in Piermont, Caprese salad, using fresh Bickford Homestead mozzarella made right next door, and crêpes filled with sautéed mushrooms, leeks, baby spinach and Vermont goat cheese on an arugula cream sauce. Then we split a large plate of duck confit — crisp-skinned whole duck leg on a risotto cake with mushrooms, onions and Asiago cheese in a red wine and shallot demi-glace. There simply wasn’t space to finish with a local cheese plate, but we knew where to find them on Sunday. 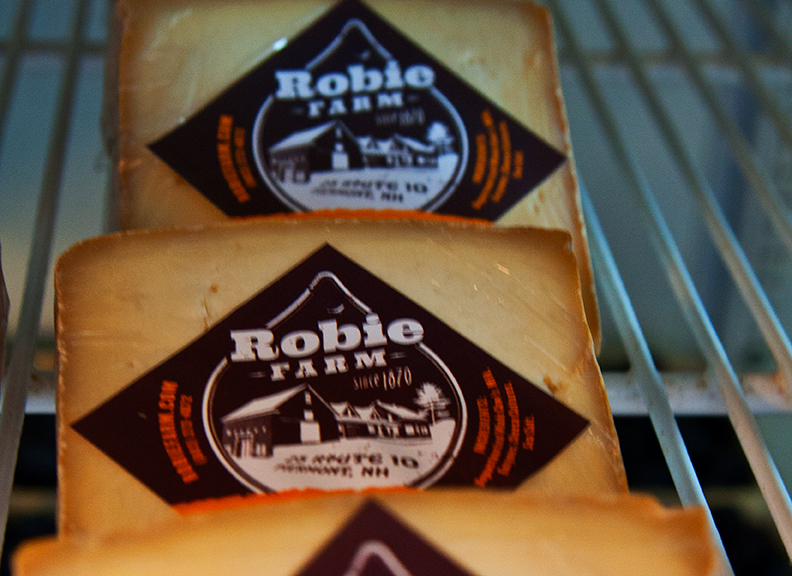 Memories of the pumpkin display at The Bunton Farm had lead us to choose Orford for our October Weekender, and we were pleased to see that this tradition hasn’t changed with the farm’s new name and owners. The Bickford Homestead — where Ariana’s is located — is now part of Peaked Moon Farm, in Piermont. After choosing a pumpkin to carve, we selected cheeses made by their resident cheesemaker: fresh Jersey cow’s-milk feta and aged farmhouse cheddar-style Hay Day. Up the road we stopped at Robie Farm for fresh anadama bread and more cheeses: a nutty Alpine Toma and one of our all-time favorites, the tangy semi-soft Piermont. A convenient apple tree at Reed’s Marsh Wildlife Management Area, where we had stopped earlier, provided juicy apples to accompany these.

Thus prepared, we headed to find a ghost town that had previously eluded us. Benjamin Quint, a sailor who served in the Revolution under John Paul Jones, settled on Jacobs Brook, on the side of Mt. Cube, and the settlement grew into a village known as Quinttown, with 10 families, mills and a school. Only cellar holes and a lone war monument remain, although Quinttown is still on the NH highway map. Quinttown Road meanders off into the woods, but we still didn’t find the town. We did find a beautiful little gorge in Jacobs Brook where one branch of the road ends, and a lovely flat ledge farther downstream where we sat in the sun and savored our local bread-and-cheese picnic lunch.